At the time of writing, Love Island 2018’s winners Dani Dyer and Jack Fincham are a couple. A few days before writing, they weren’t – but a day or so after that, they sort-of-were. The confusing (and rapid) recoupling of the reality stars has left many with questions.

Was this all a publicity stunt by 22-year-old Dyer, who has just announced her upcoming autobiography What Would Dani Do? Is every gossip magazine’s “source close to the couple” telling the truth, and are Dyer and Fincham staying together until after they’ve presented the National Television Awards?

Like a Love Island contestant who had had one too many non-branded beers around the fire pit, it was time to put the whole thing to bed. Five days after the split and a day after Daddy Dyer said the couple had just “had a row”, 22-year-old Dyer explained the break-up-and-make-up in an Instagram comment.

“I’m just a normal nutty girl who can be a bit crazy and irrational but what girl isn’t!” she wrote. Case closed. 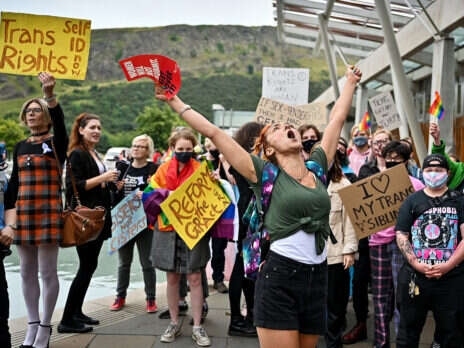 “I’m just a normal nutty girl who can be a bit crazy and irrational but what girl isn’t!” Hahahaha girls are so crazy !!!!!!!! !!! pic.twitter.com/QF4pzZgcw0

Like fellow Love Island contestant Ellie Brown – who first introduced herself on the show with the words “I think boys would describe me as cute but psycho” – Dyer is perpetuating an age-old trope that women are irrational. But this is no doctors-in-the-eighteenth-century-diagnosing-horny-women-as-hysterical: this is a self-diagnosis – a new type of aspirational irrationality that has been promoted in popular culture and continues to be perpetuated by Love Island itself.

Why would a woman want to be seen as crazy, irrational, psychotic? Why are we perpetuating a stereotype as ancient as Aristotle?

Movies, music, and memes over the last decade have upheld “passionate” “psycho” behaviour as aspirational. “Sweet but Psycho”, a song released by American singer Ava Max in August 2018, reached number one in ten countries, and features the lyrics: “She’ll make you curse, but she’s a blessing / she’ll rip your shirt within a second”. For years, Taylor Swift has also been glamourising the idea that a passionate woman acts a little “nutty”, with lyrics about burning pictures, seeking revenge, and being “drunk on jealousy”.

While “Blank Space” – Swift’s best-selling 2014 single – is a somewhat satirical dig at the media for portraying the pop star as a crazy man-eater, lyrics about “screaming, crying, perfect storms” and “rose gardens filled with thorns” arguably still perpetuate the “cute but crazy” trope.

Men – who have historically denied women their rights by labelling them “emotional” and “irrational” – of course love the whole thing. In August 2014, a YouTube video entitled “The Universal Hot vs Crazy Matrix – a Man’s Guide to Women” went viral, and it has now been viewed nearly seven million times.

The theory in the video, based on an earlier gag from hit sitcom How I Met Your Mother, posits that there’s no such thing as a sexually attractive and sane woman. “Unicorns” – as the video’s narrator, a divorce lawyer from Nashville, calls them – are women who are “below a five [out of ten] crazy and above an eight [out of ten] hot” and they “don’t exist”. They’re mythical creatures.

It’s not really surprising that women have internalised this cute-but-crazy trope, promoted everywhere from Disney’s Tinkerbell to DC Comics’ Harley Quinn. It’s the opposite of another damaging stereotype (touched upon in the afore-mentioned viral video when “chill” women are slurred as “trannies”) that the ideal woman is actually “one of the guys”.

Perhaps it’s one thing for men to create these characters, and another for women to internalise them. If you had a Bebo or MySpace account in the Noughties, you undoubtedly saw young girls post memes that glorified “irrational” women: “I’m the type of girlfriend” statuses; E-cards about being a “crazy bitch”, and most famously of all, the misattributed Marilyn Monroe quote:

“I’m selfish, impatient, and a little insecure. I make mistakes, I am out of control, and at times hard to handle. But if you can’t handle me at my worst, then you sure as hell don’t deserve me at my best.”

Irrational-but-aspirational women therefore have a long history, but to infantalise an entire gender as “normal nutty girls” in 2018 feels sad and bizarre. Dyer is young and seems both well-meaning and sweet, but she is now another force in popular culture peddling a damaging stereotype. While you don’t need to crack open a history book to know that men are always ready to call women crazy, hysterical, and irrational – taking these labels and wearing them as a badge of pride is perhaps, in the end, the most irrational thing a woman can do.