There can be few official documents more upsetting than the section of last week’s Grenfell Tower Inquiry report that details the spread of the fire. Minute by minute, as the report documents the growing disaster, you’re painfully aware of the dozens of terrified people following official advice to remain in their homes, to wait for a rescue that is never going to come.

So Jacob Rees-Mogg’s comments on an LBC radio show earlier must rank as one of the most cack-handed things a senior politician has said in quite some time. “I think if either of us were in a fire, whatever the fire brigade said, we would leave the burning building,” he told host Nick Ferrari. “It just seems the common sense thing to do.”

These comments are not just insensitive: they come perilously close to blaming the victims for their own deaths. They’re also, as it happens, wrong. In most fires in high-rise tower blocks, remaining inside your flat is the safest thing to do: it was only the failure of the fire doors and the use of flammable exterior cladding that allowed the fire to spread and rendered that advice so dangerous during the Grenfell disaster. In most cases, following Rees-Mogg’s advice could quite literally cost you your life.

The Leader of the House of Commons swiftly apologised for what is easily the biggest gaffe of the election campaign so far, and whether it will have any impact remains to be seen. That Rees-Mogg, and by association his party, is out of touch, ill-informed, and insensitive to the needs of poorer people will surprise nobody.

But the unforced effort highlights a problem that Stephen identified in September. Rees-Mogg has the potential to screw up in a way that gets traction precisely because it crystallises everything people fear about this government. This may turn out to be that moment.

More evidence of the callousness of the Tory party today came in the form of the Trussell Trust’s State of Hunger report, which found “clear and robust evidence” that benefit changes including the bedroom tax and Universal Credit had “sizeable and significant effects” on foodbank use – but also gave another, less discussed, reason for their use. More on that from Anoosh here. But suffice it to say, this has not been a good day for the government’s claim to be on the side of the people.

People who want to reduce parliamentary expenses. Angela Smith – the current Lib Dem, ex-Change UK, and ex-ex-Labour MP, who is famous mainly for describing BME people as having a “funny tinge” earlier this year – is complaining that she is being discriminated against, because she may not receive a £22,000 pay-off if she isn’t elected next month.

That payment is intended as a golden parachute for MPs who lose their jobs at an election. Smith’s problem is that, by abandoning Penistone & Stocksbridge to contest Altrincham & Sale West, the parliamentary authorities have deemed her to have quit. More on that from BuzzFeed.

The London Labour Party, which was ahead of the Tories by 22 points in 2017, is now, according to the Evening Standard and YouGov, just 10 points ahead. That, reckons Oxford Brookes’s Glen O’Hara – who last week was one of the more optimistic commentators when it came to Labour’s prospects – translates to a loss of six or seven seats, on top of around 10 implied by yesterday’s YouGov poll of Wales.

I wrote last week that I was excited about the election. I am becoming less excited by the hour.

The fact Nick Timothy, the brain genius responsible for the Tories’ 2017 election campaign, is on the shortlist to be the party’s candidate for the ultra-safe seat of Meriden, in the West Midlands. If Timothy keeps failing at this rate, he’ll be the Queen by Christmas. The local party is due to make its selection later today.

By contrast, former chancellor Philip Hammond and former minister Anne Milton – both of whom lost the whip earlier this autumn, thanks to the machinations of Timothy’s spiritual successor Dominic Cummings – have announced they will not stand again for the party. The latter is running as an independent; the former is on his way out the door. 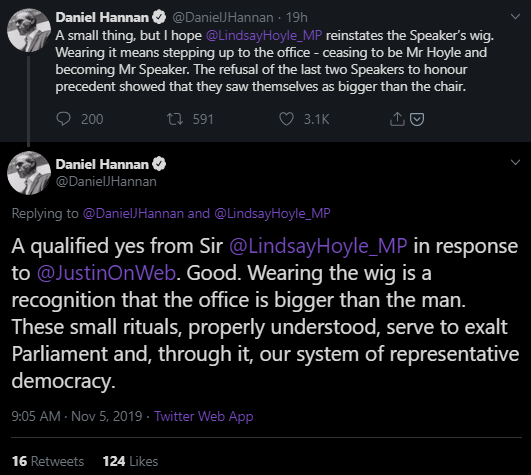 As ever, it is only the most Brexit-y of politicians who are truly in touch with what really matters to the people.

“I never thought that I would stand here and say that I’m a candidate to be prime minister, but when I look at Boris Johnson and Jeremy Corbyn, I am absolutely certain I could do a better job than either of them.”

Liberal Democrat leader Jo Swinson, speaking at the party’s campaign launch earlier. It’s probably a measure of how seriously this prospect is being taken that everyone is ignoring it in favour of arguing about this bit:

“I’m absolutely categorically ruling out Liberal Democrat votes putting Jeremy Corbyn into Number 10… he is not fit to be prime minister.”

The next six weeks are going to be fun, aren’t they?

With the inevitability of a deluded blog by Nick Timothy, in the first edition of this column yesterday I screwed up. I argued that who won the election to be the new Commons speaker could affect the parliamentary arithmetic. In fact, as Stephen later gently reminded me, a speaker from one of the two big parties will always have one deputy from their own and two from the other to balance it out.

As if that weren’t enough, a certain politics professor got in touch to point out that – despite my describing expectations of a large far-right vote share as the “Matthew Goodwin school of psephology” – he’s actually been documenting the squeeze on the Brexit Party’s prospects for weeks. Ah well – start as you mean to go on.

Also – Evening Call is due to become an evening rush-hour email from next week. If you want this stuff direct to your inbox, you can sign up here.