If you don’t know the Extinction Rebellion logo, you’ll likely recognise it by sight. Instantly memorable and infinitely replicable, the design has been stamped on clothing, flags, leaflets, lampposts, buildings and bike helmets. It is at once a badge of belonging, a pledge of commitment, a statement of protest, and an expression of anger.

In just under a year, Extinction Rebellion, an international movement of climate activists that was launched in the UK by Roger Hallam and Gail Bradbrook, among others, has pushed the environmental crisis to the forefront of peoples’ consciousness. The movement’s strong visual identity has been key to its success; its distinctive symbol is now a global marker of climate activism, and is often compared to the iconic Campaign for Nuclear Disarmament (CND) logo, which spawned a thousad peace sign copies.

Using simple but bold messaging, Extinction Rebellion’s distinctive graphic identity conveys the movement’s three goals: making the government tell the truth about the climate emergency, cutting the UK’s greenhouse gas emissions to zero by 2025, and establishing a citizen’s assembly to propose solutions to the crisis. The symbol is the product of an anonymous artist who goes by the name ESP. Its circle represents the planet, and the “X” within it appears like an hourglass signaling the ever-decreasing time left to halt devastating climate change.

After creating the symbol in 2011, ESP contacted around 20 environmental groups offering its use for free, with little success. Just one organisation replied, to say they would only be interested in using the design if it became popular. But late last summer, the founders of Extinction Rebellion (XR) approached ESP, and the symbol was adopted as the face of the new movement.

Jason Cowley book: Who Are We Now? Stories of Modern England

In an interview with online magazine EcoHustler in April, ESP said symbols “transcend language differences and distil a lot of meaning into a simple form, which then becomes like a concentrated form of energy.” In late July, XR groups in several countries across the world created five giant versions of the extinction symbol; from sand in New Zealand, flowers in Colombia, and people in New York.

XR’s own art group, which works on the look and feel of the movement, has used the symbol as the starting point to build a powerful visual identity. Like the rest of the movement, the group is almost entirely decentralised, meaning anyone can contribute as long as they abide by a common set of principles: ready-made posters, leaflets, banners, and stencils can be freely downloaded to print at home – but XR stipulates that this artwork must not be used for profit. 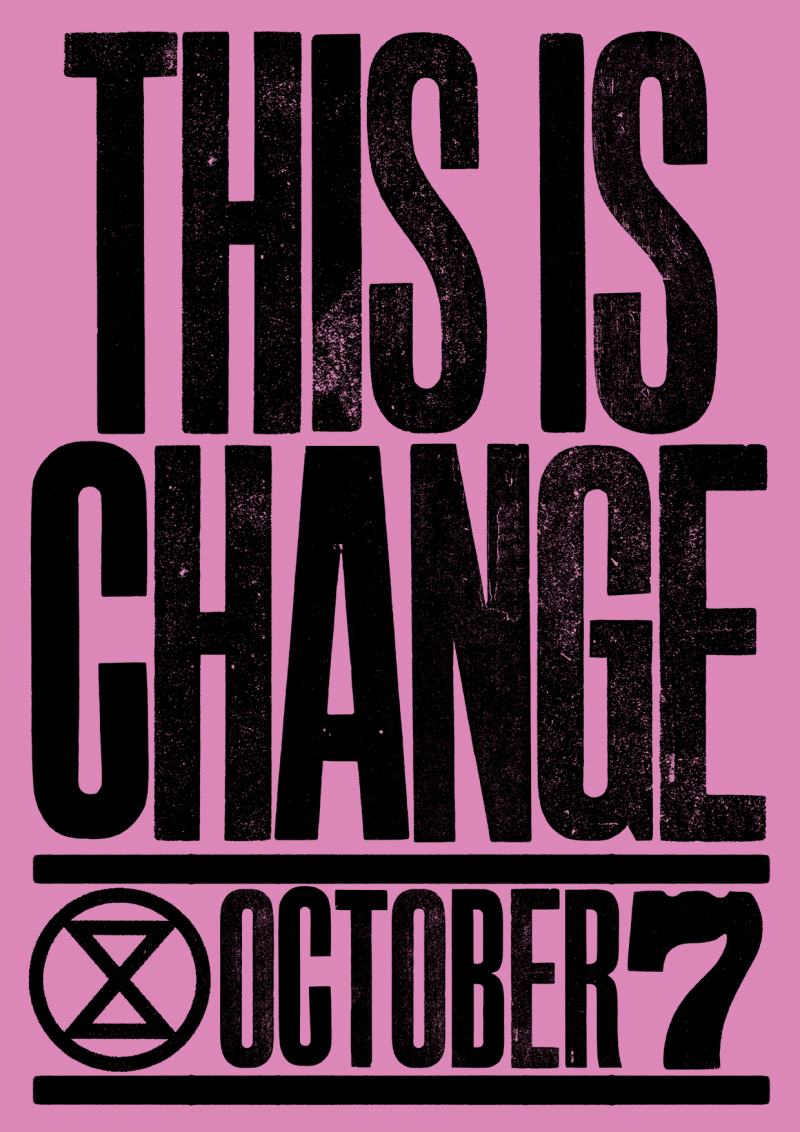 Graphic designers Charlie Waterhouse and Clive Russell have worked with XR since its inception. The duo, who head design agency This Ain’t Rock and Roll, are veteran artist-activists. They previously worked with the campaign group Stop Killing Londoners, which campaigned to halt the capital’s rising pollution levels, and the Brixton Pound, a local currency introduced to support independent businesses in the South London constituency.

On the morning I meet Waterhouse, he is proudly wearing an upcycled grey t-shirt emblazoned with a large extinction symbol. “By having a very simple and direct set of design principles and assets, it’s allowed us to quite effectively get… complicated messages across”, he explains.

The duo’s designs take inspiration from those created during the Paris riots of May 1968, when artists and students occupied the École des Beaux-Arts and established the Atelier Populaire (Popular Workshop), which designed and printed thousands of simple and iconic posters that appeared all over the city. Atelier Populaire described its posters as “weapons in the service of the struggle [that] are an inseparable part of it.”

Russell also cites the vivid colours used by the artist Eduardo Paolozzi as an inspiration. Both Paolozzi and the Atelier Populaire “eschewed the mainstream approaches of their time, and looked for something that would instill rebellious natures in people… [they] also sort of poked a finger in the eye of the establishment”, he says.

Where previous climate activist groups were associated with a parochial hippy aesthetic – think fuzzy fabrics, dream catchers and bell bottoms – Warehouse and Russell were keen to give Extinction Rebellion a stronger, more distinctive identity (this summer, some XR supporters spoke out to criticise speakers for using “hippy” language, claiming it dilutes their message.)

“From my point of view as a designer, every single green movement up until now has been rubbish – it’s been dreadfully designed, it’s appealing to its own internal audience, not looking outward,” Russell says. “It was really important to make sure that we got across the idea that we’re a non-violent movement, but that doesn’t mean we’re not actually angry –  we are really angry,” he adds.

The design is “consciously intersectional,” Waterhouse says. “We need to make sure that we have a welcome mat for everybody, so that you can have someone in a twinset and pearls from Tonbridge Wells on the same protest as someone who might lock themselves to a tree.” 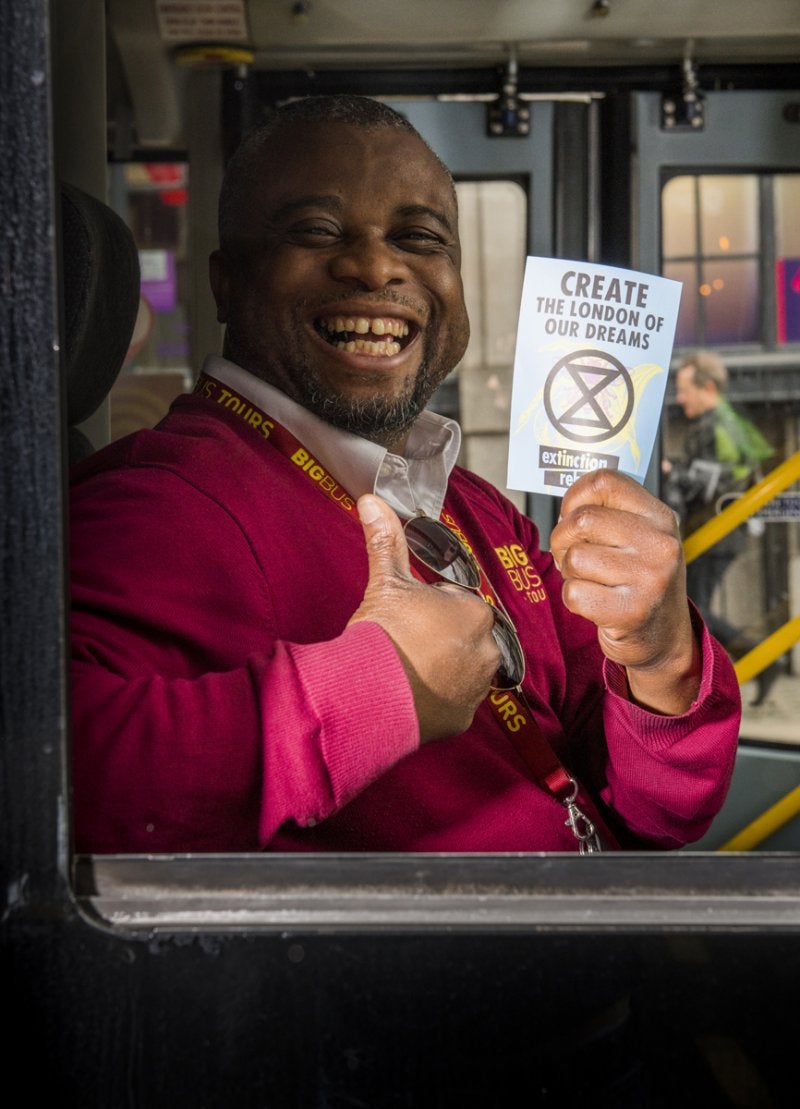 The movement identifies as neither political nor ideological. “We know that there are people like the greens, or people on the left, or the people with particular campaigning zeal, that might be early to come with us,” he explains. “But we need everybody, we need the Tories, we need Labour, we need the Lib Dems, we need the grannies, we need the youngsters, and so creating a design programme that was able to put its arms around that disparate set of people was really fundamental.”

Simplicity was key to the designs – which are intended to be endlessly replicable by people who aren’t experienced designers. Russell says they learnt from the mistakes of the Paris ‘68 artists: “The one thing that they kind of got wrong was that they closed it up in a room – it was one group of people doing everything – but then they didn’t have the ability to give out as easily was we do now”.

If the art group has learned anything from the success of the CND logo, it’s the constant risk of commercial appropriation. Though originally designed as an anti-nuclear symbol, the CND peace sign has since been co-opted for commercial gain, appearing on tote bags and t-shirts, and divested of its radical meaning. Despite guidelines prohibiting the commercial use of the XR symbol, however, unauthorised merchandise sporting the symbol pops up for sale on multiple websites.

Wouldn’t selling XR-branded clothing help raise money for the movement, though? Waterhouse and Russell argue that doing so would dilute its integrity. When Atelier Populaire explained why they had refused to sell their works, they wrote: “to use them for decorative purposes, to display them in bourgeois places of culture or to consider them as objects of aesthetic interest is to impair both their function and their effect.”

“If we were to say go to H&M, you can get an Extinction Rebellion t-shirt and join us – what are we saying to people? We need to change this shit,” Russell says.

Grace Morgan was a Danson Foundation intern at the New Statesman.