Roxane Gay was gang-raped at the age of 12 by a group of boys from her school in an abandoned cabin in the woods. The story of her rape is one of the first she tells in Hunger: A Memoir of (My) Body, describing it as the “cleave” in her life – forever split into “before” and “after”.

A year later, Gay was sent to boarding school in New Hampshire and immediately began to gain weight. This, she writes, was the “beginning of the problem” with her body. She describes transforming her body “into what it needed to be – a safe harbour rather than a small, weak vessel that betrayed me”. She wanted to be physically large to make herself “repulsive” to men.

Hunger: A Memoir of (My) Body is Gay’s fifth book and her second work of non-fiction (preceded by her 2014 globally renowned essay collection, Bad Feminist). When I recently met her in London, during her first ever trip to the UK, she discussed possible subjects for her second non-fiction book, and her immediate, deep-seated reluctance to address the issue of weight. Despite being a black, bisexual woman who has artfully addressed topics of race, sexuality, and feminism before they became more mainstream, the mere thought of discussing fatness made her uncomfortable.

Gay said that people have “no vocabulary and no tact” for discussing fatness. When writing Hunger, her weight was “the hard part, not talking about sexual assault… It’s easier to talk about gang rape than it is to talk about your body.”

I asked Gay about the so-called body positivity movement, which she described as a “necessary corrective to the damaging messages women are constantly bombarded with”. But, she added, the movement is far from being genuinely inclusive, and is dominated by women who are only slightly overweight or not at all.

“What I wanna see is a woman who’s a size 42 who loves her curves and is encouraged to be a part of the body positivity movement,” Gay said. “We don’t see a lot of super-fat people being given the space to publicly embrace their bodies.”

Another element Gay struggles with is the misattribution of “bravery.” “Any time a woman takes pictures and you see a stretch mark, it’s like, ‘Oh my God, I just admire your bravery’ and it’s like, ‘Are we really calling this bravery?’” she said. “They genuinely believe they are doing something transgressive by taking a picture in their bra and allowing us to see a stretch mark.  That’s how bad things are for women.”

But Gay said that the movement shouldn’t shame people for wanting to lose weight – she had a sleeve gastrectomy last year to reduce the size of her stomach. “Life is short and I write this in Hunger: it’s easier to lose weight than it is for the world to change.”

Beyond her writing, Gay is renowned for her prolific use of Twitter (where she has 560,000 followers) and has become an icon of the platform. She posts multiple times a day, tweeting on politics, social affairs, pop culture and music (her favourite genre being Nineties hip-hop), and her “nemeses”, of which she has eight. Despite this, she revealed that she thinks about quitting Twitter “all the time”.

Gay explained: “People have this expectation that I’m going to be everything to them at all times. This idea that black women are the mules of social justice and are gonna have perfect politics and know exactly what to say… it’s so unreasonable,” she said. “So it’s not the trolls – although the trolling is quite terrible – who make me want to quit. It’s those people who are going to drive me off of Twitter.” 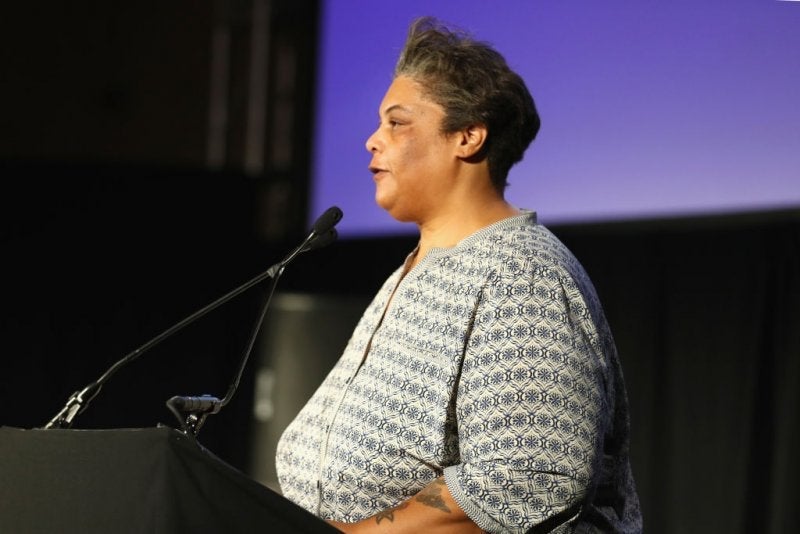 We inevitably moved onto American politics, and Gay told me that she doesn’t have “a tremendous amount of hope” for the state of America, predicting that Trump will fail to be unseated in 2020. While heartened by the Democrats taking back the House of Representatives during the midterms in November 2018, she’s concerned that it will make the American left “so comfortable that we don’t stay vigilant and politically active because it’s incredibly important that we do so.”

I asked about her reaction to Brett Kavanaugh’s Supreme Court confirmation and the hearings with Dr Christine Blasey Ford. She told me that she believes Trump and “smug and righteous” Kavanaugh are two parts of the same phenomenon. “If an American president can say ‘grab them by the pussy’ and still get elected,” Gay said, “Then of course Brett Kavanaugh can be confirmed to the Supreme Court, despite the fact that he sexually assaulted a woman.”

“It just shows that we don’t believe woman and we have a very permissive culture where a woman is the one suffering,” she told me. “I do believe people on the confirmation committee believed Ford. I think they believed her, and it wasn’t enough. They believed her, but they did not believe that attempted rape was enough to keep Kavanaugh from his job, from his dream job. So now we have this guy on the Supreme Court and that means we have two sexual predators on the Supreme Court, which is quite a statistic when you think about it.”

“It was really distressing to me that nearly twenty years after Anita Hill had to defend herself against Clarence Thomas and it didn’t matter, that it was happening again,” she said. “We don’t learn from history.”

Gay emphasised that the #MeToo movement needs to spend more time focusing on working-class women who cannot afford “socially or financially” to come forward. I asked her what she thought about the movement’s attempts to make “white feminists” care about non-white women.

“That’s always the focus: how do we reach white women,” she told me. “And it’s like, girl: we don’t. These are people who are highly educated and highly aware – they choose. They have a very selective amnesia about what they care about, and I don’t think there’s a magic set of words that’s going to make them all of a sudden develop enough empathy to care about others. Either they come to the light or they don’t.”

“It’s like, in addition to highlighting the fact that marginalised women are dealing with sexual harassment and misconduct at even higher rates, it’s highlighting that they have far less recourse. Like, how do you not know that? It’s just not rocket science to figure that out.”

Gay said that another group “woefully” failed by feminists is transgender people. “The world is transphobic and I think it’s appalling, because trans women are women. When I see how trans people are treated and the agony that a lot of trans people deal with – the suicide rates, the murder rates of black trans women – I just think, ‘Do you really think that’s a choice?’”

She continued: “I think a lot of feminists are very comfortable being anti-trans and that’s painful to see because we should know better, having been marginalised as women throughout history and today. How dare we marginalise others now.”