This week in parliament, MPs came face-to-face with a robot sheep. Or maybe “robot” is too grand a term for what was essentially a plastic model, wrapped in a bedraggled sheepskin, with a hole at its rear-end where monitoring equipment could be inserted and stored. The peculiar thing didn’t even have eyes.

A creation of the University of Bangor, the electric ewe mimics and measures an animal’s body temperature and energy use. Normally she would be out in a Welsh field, helping researchers quantify the impact of environmental “public goods” – like trees and hedges – on a herd’s well-being.

On Wednesday, however, it made the trip to Westminster for a “parliamentary farmers market”, hosted by a coalition of UK environmental groups under the umbrella organisations of Greener UK and the Wildlife and Countryside Link.

Thérèse Coffey MP, parliamentary under-secretary at the Department for Environment, Food and Rural Affairs, posed for a photo with the creature.

“It’s great to see you create really good food products and manage to care for the benefit of the earth,” she said in a short speech, which also recognised the challenge of reducing emissions from ammonia and diesel.

Farmers were “the original friends of the earth” as far as improving the environment is concerned, she added, in an echo of the government’s 25-year Environment Plan, released this January.

Yet no one seems sure of exactly how the balance between the nature and farming will play out: “It is important that as we look at the view, we also eat it as well,” said the event’s host, Neil Parish, MP for Tiverton and Honiton.

According to Dr Andy Smith, a senior lecturer at the University of Bangor, new technology offers the best hope of maintaining profitability in this nature-friendly future.

By using data from tools and instruments, farmers will be able to better judge which environmental schemes may also work best for their business, he explained, while demonstrating the wonders of the electric-ewe. Planting more trees for animals to shelter under, for example, can help stabilise their core temperature and reduce the need for extra feed. 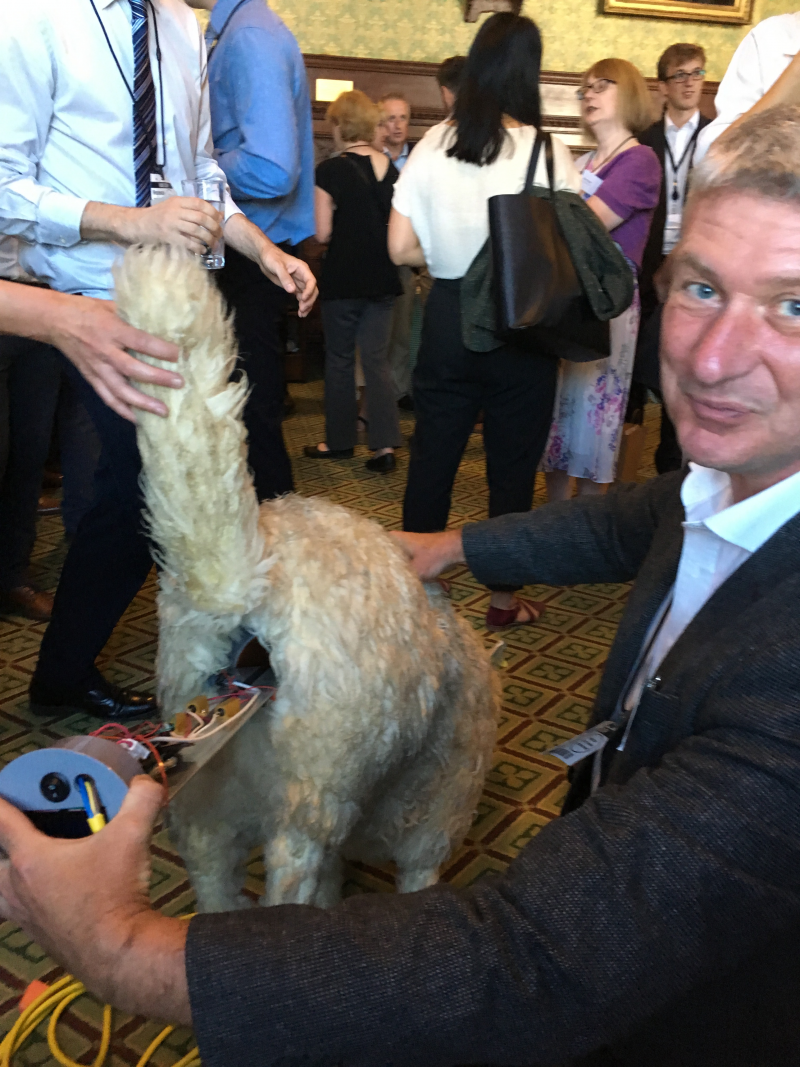 Wild goings on in Westminster, with Dr Andy Smith from the University of Bangor

But others are more sceptical. Vincent Lusby farms barley, goats and heritage poultry at his 200 acre home on the Irish border. He fears that Michael Gove’s plan to replace farming subsidies with “public goods” payments could make small-scale farmers beholden to the whim of politicians.

Plus there is the looming presence of Brexit, which could leave environmental regulations in a tangle and oversight in a void, not to mention a deficit in the agricultural workforce.

Government action on this subject has thus never been more pressing: UK soils are just 30-40 years away from fertility loss, dairy farmers are facing bankruptcy, and a new generation of ecologically questionable “mega-farms” are stepping in to fill the breach.

British farming policy has a unique opportunity to plough a new course, but without further clarity fast, it also risks digging itself into a horribly big hole.