On the evening of Wednesday 13 September, pictures of a 60-year-old woman with bruises on her face began to circulate online.

A 60-year-old woman has been beaten up by 4 Trans activists in Hyde Park. Footage out later. As can see one side of her face is purple. pic.twitter.com/kmoDMLFXTY

She was punched and kicked to the floor and then they continued. Also strangled as can see round the base of her neck in photo on the right. pic.twitter.com/HEhKK6cYnW


The person in the picture is called Maria MacLachlan. She claims on both Mumsnet and Facebook that she was “beaten up by a bunch of kids” at Speakers’ Corner after “some kid in a hoodie” tried to take her camera, which was looped around her wrist.

Just like to say thanks to @TerrorizerMir, Julia Long and all the other fantastic people I met tonight and that this is fucking war. pic.twitter.com/KK5WBNHnmP 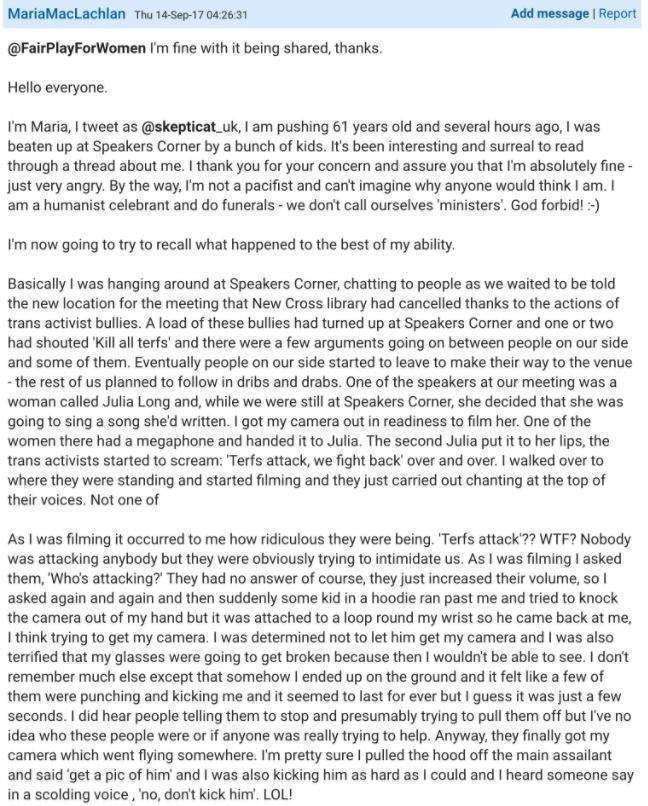 MacLachlan was waiting to attend an event called “What is Gender?” – its location was announced at Speakers’ Corner last night, and while waiting she came into contact with people she describes as “trans activist bullies” who were protesting against the event. MacLachlan has not responded to a request for comment.

The event she wanted to attend was initially scheduled for Wednesday 13 September from 7-9pm at the New Cross Learning centre in Lewisham, south-east London. The speakers would be discussing the Gender Recognition Act of 2004 (which is now under review by the government). 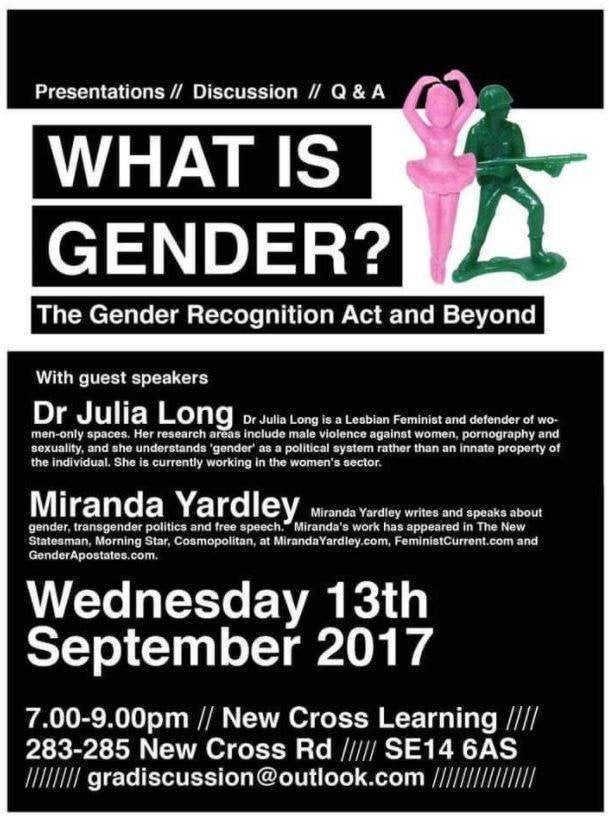 When the event was announced, activists, including the campaign groups Sisters Uncut, Goldsmiths LGBTQ+ Society, and Action for Trans Health London, organised a protest against it. None of their call-outs to their members that are visible on Facebook incited violent action. All three organisations have been asked for comment but have not yet responded.

Dissapointed that @newxlearning is hosting a “debate” that will only serve to increase transmisoginy. Solidarity with our trans sisters! pic.twitter.com/gwIOoy1iWu


Some protesters encouraged contacting the organisers of the event to ask for it to be cancelled. This is because the speakers included the writer and self-described “fabulous transsexual” Miranda Yardley, the “radical lesbian feminist activist” Dr Julia Long and jewellery designer Venice Allan.

They are all well-known feminist figures who are accused of being “TERFs” – short for “Trans-Exclusionary Radical Feminists” – by some in the trans community and beyond, who find their views on gender threatening towards trans women in particular (Long calls trans women “he”, for example, and Allan’s most recent tweet at the time of writing states, “trans women are NOT women”.)

The protesters argued that there was no “debate” aspect to the talk, and therefore the prevailing message would be an attack on trans people.

On Tuesday 12 September, the New Cross Learning centre announced that it would be cancelling the event. “After completing a risk assessment the Management Committee believe the potential risks to the library, volunteers, public and building are beyond our risk appetite,” it wrote on its Facebook page. “Our decision is not due to outside pressure but is purely taken for health & safety reasons.” 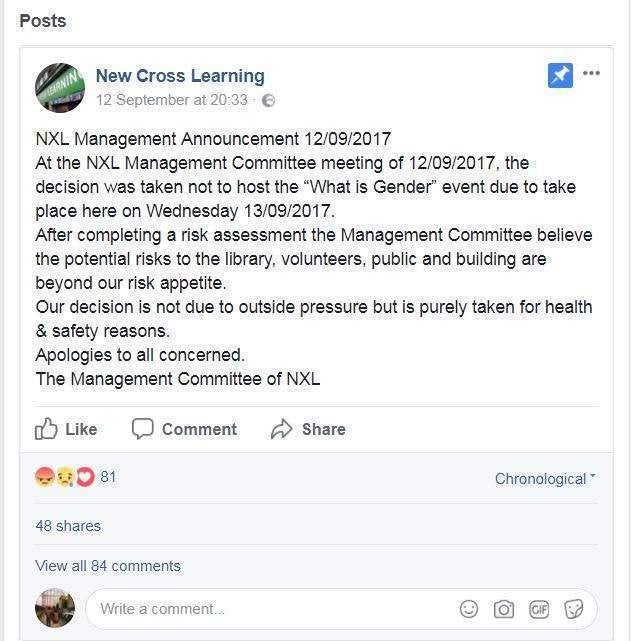 Although the venue denies outside pressure led to the event being cancelled, Goldsmiths LGBTQ+ Society claimed some part in the decision on its Facebook page: “GOOD NEWS! This protest has been cancelled, because the event has been cancelled!!”, it announced. “We succeeded in putting enough pressure on the organisers that the[y] decided to cancel for ‘Health and Safety concerns’.” 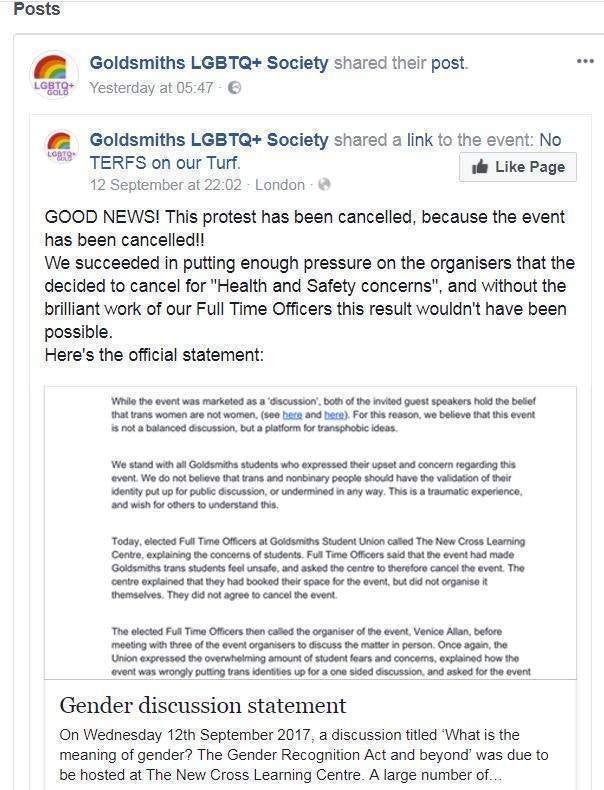 The venue has not yet responded to the New Statesman‘s question asking if it received threatening calls or emails from any of these protest groups, and there is currently no evidence to suggest it did.

On the day the event was due to take place, the speaker Yardley tweeted a meeting point – Speakers’ Corner in Hyde Park – for heading to its new location:

Here’s confirmation of tonight’s meeting: Speakers’ Corner at 7pm, and we go on to the venue from there. pic.twitter.com/NUTg1yVKi8


Protesters as well as attendees like MacLachlan gathered in Hyde Park in response to this, which is when the incident occurred. There is some footage of the altercation on YouTube:

It is difficult to tell in the clip what exactly happened – there is a scuffle that involves MacLachlan in physical contact with a younger person, a piece of equipment (her camera) crashing to the floor, and then being hit in the face by a third person in a hoodie who eventually runs off.

There are cries of “call the police” at the end of the clip. The identity of the perpetrator or perpetrators is unknown.

After initally saying twice that they had no record of the incident, the Metropolitan Police later said they had been called to an the incident at 7:30pm and spoken to the victim. There were no arrests and and enquiries continue.

Although the circumstances of the attack are still unclear (and will probably remain so, unless clearer footage emerges or the police investigation procves fruitful), voices from both camps – those who were in favour of the event taking place, and those against – are claiming what it reveals about their opponents.

Trans activists warn that the incident could be used to claim they are violent, or that it might be described as an episode of male violence, which would be offensive if the attacker turns out to be a trans woman. 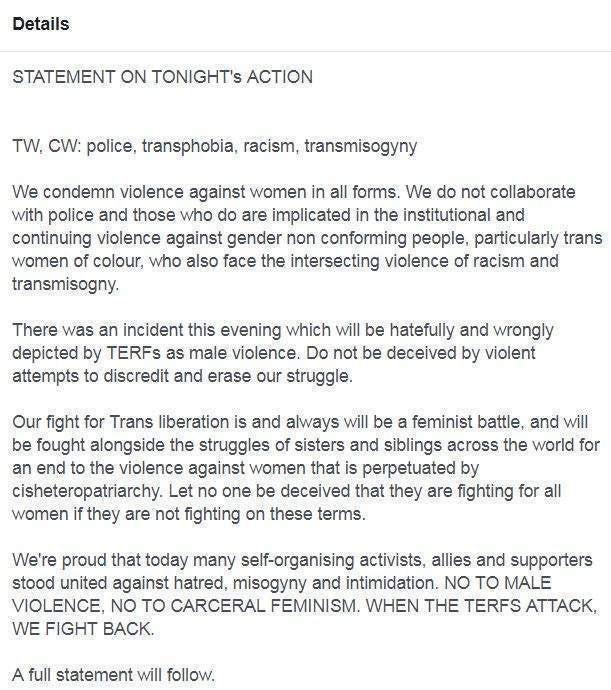 (From the Action for Trans Health London Facebook page)

Others, such as the speakers and those who are sympathetic towards them, are asking why we can’t all condemn an attack on a woman.

Just once, just fucking once, I’d like one of this lot to condemn male violence without any qualification. Just once. pic.twitter.com/ADF6Ca9kxp


No conclusions can be drawn without further evidence or testimony from the parties involved, so it’s probably best to end with the writer and comedian Shon Faye’s Twitter take on the story, and condemn both transphobia and violence against women:

The tweets allege it was by a trans person. The sources are not impartial and so are keen to present it as the doing of a trans woman

I don’t think any woman should be being hit anyway, but its EXTREMELY unhelpful to trans women as a whole tbh

This article was updated at 10.45am on the 20 September 2017 after the Metropolitan Police corrected their earlier statements that there was no record of the incident. They had previously stated on two occasions that no incident had been reported.