I spent my weekend in Bournemouth. It’s a lovely place for a weekend away, with gorgeous sandy beaches, beautiful parks and unusually good weather for an English seaside resort – but I didn’t get to enjoy any of that because I spent the weekend shut in a conference centre with a bunch of Lib Dems. Here’s what I learned from the experience.

Almost the first thing to catch my eye on entering the Bournemouth International Centre was a cluster of women with EU flags on their head. 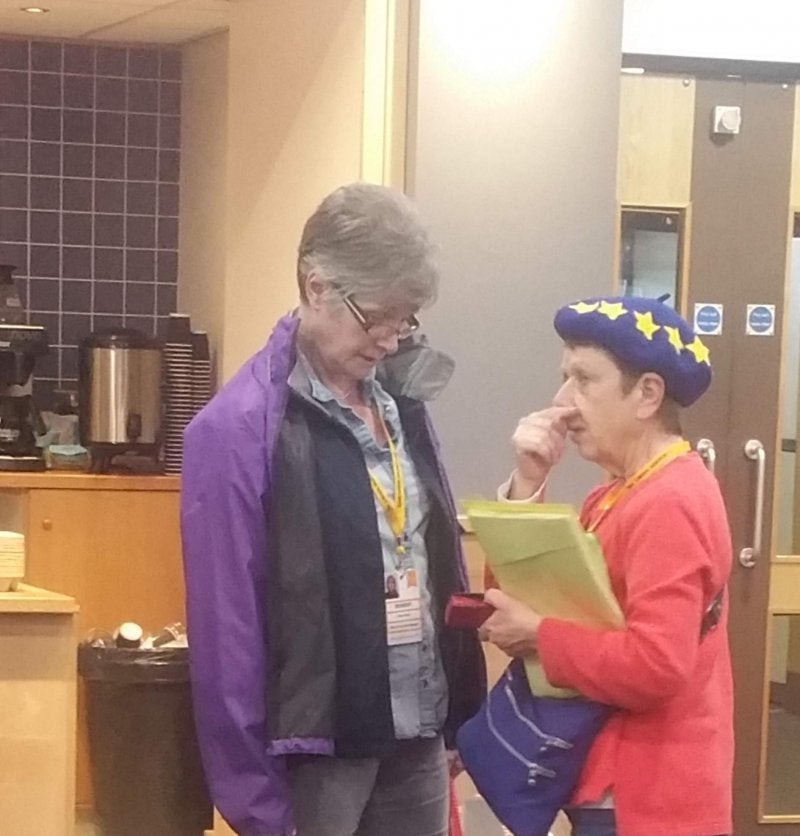 I’m not entirely clear whether there were a lot of these guys, or a small group I just happened to notice a lot because an EU flag beret is the sort of thing you’ll almost certainly be able to spot across a crowded conference hall, but either way I kept seeing them all weekend.

Vexingly, they were always women of a certain age. Do young women not love the EU? Do they not make the hats in men’s sizes? What?

Anyway.  If you want to show your support for Britain’s membership of the European Union while looking a bit like one of the mushrooms from Super Mario Bros 3, now you know how.

You can buy laminated pictures of Tim Farron for £4.25 a throw 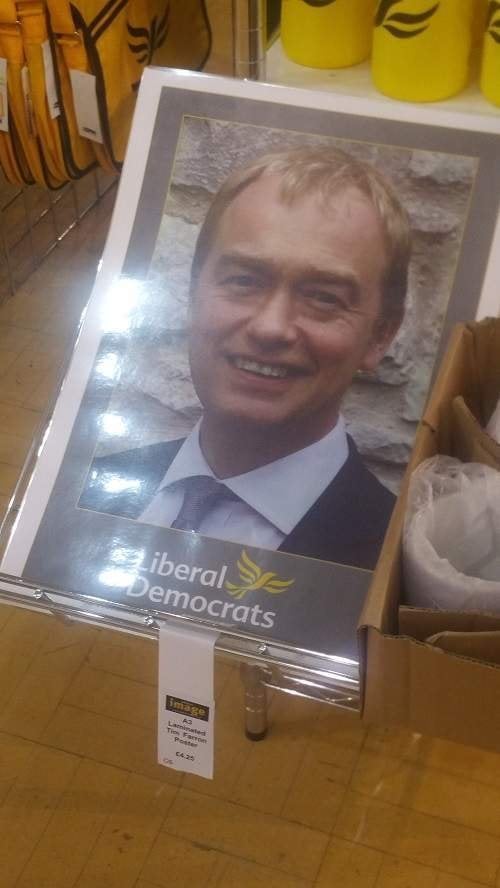 Something I would like to know is who exactly the market is for this particular product.

Something I would not like to know is why this product is laminated.

The reason I was at LibDem conference at all was because the Young Liberals had wanted someone who wasn’t a politician to join their panel about intergenerational inequality and, basically, shout at everyone about housing. This is how I spend most Saturday nights anyway, so I agreed.

The thing that stays with me about that discussion was something the new(ish) party leader Vince Cable said. I’m paraphrasing, but it was along the lines of: We need to explain to homeowners that house prices have to fall.

At the time, I thought perhaps this was a comment tailored for a young and angry audience – but he said something similar when taking questions from the party at large the next day. He also said that the party needed to take on the NIMBYs that oppose house-building.

All of which I’m quite in favour of, on the whole. Except…

… but his party night not let him

…at least some of those NIMBYs are members of his own party. One of them is the MP for Oxford West & Abingdon, Layla Moran, who was elected in June on a platform of protecting Oxford’s green belt from the housing development she says neighbouring Tory and Labour councils are threatening to build.

During our panel debate, Moran explained that she favoured meeting Oxford’s housing need by building in neighbouring Bicester (not, as it happens, a part of her own constituency). She also argued that building on the green belt should be the “last resort”, although since the city already has the most expensive housing in Britain relative to wages it’s not clear to me what the last resort might look like if not this.

At any rate: LibDem policy is set by the members, not the leadership. And Moran will be far from the only LibDem politician who wants to protect their patch from development. For those who favour housebuilding, Cable’s support is A Good Thing – but that doesn’t mean his party will follow him on the issue.

Why, I asked people in a panic whenever conversation palled, are you a LibDem? Sometimes, when people seemed particularly annoyed with the party around them, I’d instead ask: why are you still a LibDem?

One of the answers I was given stays with me, because I’d not considered it before. You might hate the leadership, the policies, the coalition. You might not know many LibDems back home. But twice a year you go off to a conference somewhere, and you spend four days with friends from all over the country who otherwise you would hardly ever see.

Leaving the party doesn’t just mean cutting up a membership card: it means abandoning those friends.

This, I suspect, goes some way to explain why, even when the party is very obviously in a hole, everyone in the Bournemouth International Centre this weekend was so bloody cheerful.

I’m a man on the cusp of middle age and I’m sitting here with freshers’ flu and no free drinks parties, how the hell is this fair.

The Brexit debate on Sunday morning was, I was assured, going to be the fight of the conference. I’m a big fan of both pointless political rows and the European Union so I went along.

The funny thing, though, was it was a remarkably difficult fight to understand. Both sides wanted Britain to remain in the European Union, of course (they’re LibDems; they have hats). But one faction wanted to commit the party to an “exit from Brext” referendum on the final terms of Brexit, while the other just wanted to stuff the whole thing. Okay.

It further transpired that actually both sides would probably accept another referendum (either the first or the third, argued former MP Julian Huppert, depending on how you count, but definitely not the second). The argument was really about the meaning of that referendum: if that was lost, too, would the LibDems accept it and back Brexit? Well, obviously not, but in which case what was the point of supporting a referendum? Why not just be clear that you oppose the whole thing as a mess?

Moreover, LibDem policy is meant to represent what a LibDem government would do. In the event of a LibDem majority – pause here for hollow laughter – it’s probably safe to assume that the mood of the British public towards Europe will have changed so radically that we could cancel Brexit without bothering with another referendum. So is LibDem policy a guide to the policy of a majority LibDem government? Or is it a guide to what it would fight for without said government? And since nobody outside the party is likely to read the thing does it actually matter?

Just as I was getting my head around this, someone requested that conference suspend standing orders, the chair said that would be a vote on whether to have a debate about this request, someone else said that standing orders had already been suspended, everyone began muttering, and my nose began to bleed.

In the event, after a long and exhausting debate that left everyone in a terrible mood, the LibDems voted overwhelmingly to keep policy pretty much the same as it had been before. Which, ironically, is a good description of the party’s position on Brexit.

The LibDems love a good singsong

“Oh you have to go to Glee Club,” people kept telling me. “You’ve not seen LibDem conference until you’ve been to Glee Club.”

I promise that whatever you’re imagining right now, the reality is worse.

It works like this. People rewrite the lyrics to popular songs to make them about British politics, and then a roomful of LibDems sing them like they’re hymns. Here’s a topical one about David Cameron and a pig, sung to the tune of English Country Garden:

Sadly I didn’t make it to glee club – I was back in London before the glittering night – but just so I didn’t feel left out a crowd of LibDems demonstrated the concept to me by singing several verses to the tune of American Pie outside a pub. And just for me. Lucky old me, eh!

Despite the lyric “Tony Blair should fuck off and die”, this, I’m told, actually dated to before Iraq, all the way back to talk of a Labour-LibDem pact in the mid-1990s, long before many of those singing were even involved in the party. The lyrics are printed in a book that expands every year, and you can buy your own copy. So it is that people can confidently sing along with satirical songs dating back to the 90s or beyond. Amazing scenes.

If you ever tweet anything nice about LibDem conference, they will start sending you membership forms

Apart from anything else you people give me the flu.