In 2014, the former Liberal Democrat minister Jeremy Browne challenged his party in an interview in the Times: “If you didn’t exist why would it be necessary to invent you?” That challenge has been picked up enthusiastically by Tim Farron, the former Lib Dem president, who is widely expected to become the next leader. As Mr Farron asks in this interview with the New Statesman, “Do you want the party that is second in the next coalition agreement to be some separatist or nationalist wrapped in a Union Jack or a Saltire? Or do you want the next party that is the junior party in that coalition to be sane, sensible, moderate and progressive?”

Asked by David Cameron in 2010 about her experience of coalition government, Angela Merkel said: “The little party always gets smashed!” And so it has proved for the Lib Dems. The party has been reduced to barely 2,000 councillors, a 20-year low. It was routed in the 2014 European elections, losing ten of its 11 MEPs. In Scotland, where it has 11 Westminster seats, the party is more loathed even than the Tories. On 4 March, the Lib Dems again fell to 5 per cent in a YouGov opinion poll, a repeat of their worst showing in 25 years.

And yet, in spite of all this, they remain in reasonable spirits. They profess to be proud of how they have moderated the excesses of the Conservatives in government, and are convinced that they will have a significant role to play at Westminster after an election that is expected to return another hung parliament. Constituency polling, both public and private, consistently shows that they are doing well in the seats they hold. They may perform better than expected even in Scotland, because of the popularity of their former leader Charles Kennedy and their long-standing strength in Orkney. 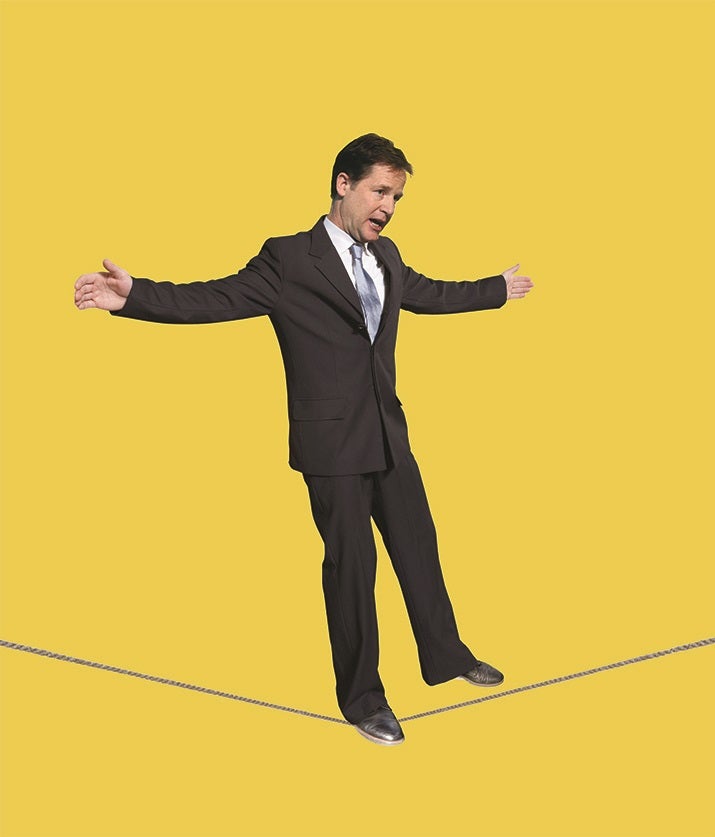 This magazine has been repeatedly disappointed by the Lib Dems. The party enabled the Conservatives to enact a programme of austerity – and at a far swifter pace than was necessary – that plunged the United Kingdom back into recession and ensured that the recovery from it was the slowest in a century. Its U-turn on tuition fees alienated a generation of young voters and turned the hapless Nick Clegg into a figure of fun. Its support for the Conservatives’ dogmatic and foolish reorganisation of the NHS is unforgivable. And it was part of a government that introduced the bedroom tax.

However, if the Lib Dems win as many as 30 seats in May that may yet be a good thing for Britain and the left, especially if Mr Farron emerges as leader. Their flaws are many, but they are and can be a progressive force. The party is an uneasy coalition of Gladstonian classical liberals and social democrats. Nonetheless, it has many sound policies and offers the strongest commitment to the preservation of civil liberties at Westminster.

In this way, the Liberal Democrats can serve as an antidote to the Conservative fetishisation of the security services as well as Labour’s statist instincts. Unlike the Scottish National Party or the UK Independence Party, both of which aspire to be the new third force in British politics, the Lib Dems aim neither to break up the UK nor to pull Britain out of the EU. As Mr Farron argues, against the nationalist insurgencies that might replace it, the Liberal presence at Westminster should be welcomed.

Religions are not abstract entities that have some Platonic essence: they are, as the historian Tom Holland has written, essentially “the spectrum of those at a given time who chose to interact with a corpus of traditions and texts, and emphasise what they chose to emphasise”. Our cover story this week is a report by Mehdi Hasan defending Islam (he is a committed believer) from its abuses by the murderous Islamic State. Isis and its followers are contemptuous of tradition – witness how they delighted in destroying ancient Assyrian and Akkadian artefacts at a museum in Mosul – and see themselves as stripping it away to get back to what they consider to be an unadorned relationship with the primal impulses of their faith.

The challenge to orthodox Islamic theology and jurisprudence is precisely that Islamic State jihadis are not relying on old interpretations to mediate the Quran, the sunna and the sira. Indeed, Islam is grappling with the same deconstruction of its traditions by those claiming to hark back to the wellsprings of the faith as the Catholic Church faced in the 16th century. The crisis is deep; and, most alarmingly, many young men and women born and brought up in Europe are attracted to this death cult.