Ed Miliband has made the need to dramatically increase the rate of housebuilding one of the key themes of his leadership and he’s returning to the subject today with the launch of Michael Lyons’s commission for Labour. At present, building is at its lowest level since the 1920s, with just 107,950 housing completions in the last year. Miliband’s aim is to nearly double this figure to 200,000 by 2020, but how will he do it? Here are the five main ideas that have emerged so far.

1. “Use it or lose it” powers to tackle land hoarding

At present, there are 523,700 homes with planning permission that have not been completed. One reason for this is the practice of land banking, with investment funds, historic landowners and developers sitting on vacant land and waiting for its value to go up.

Miliband will today highlight figures showing that the profits of the four biggest developers – Barratt, Berkeley, Persimmon and Taylor Wimpey – have risen by 557% since the coalition took office “even though homes have been built at their slowest rate witnessed in peacetime for almost a century”. The number of houses completed by these firms increased by just 4,067 in 2012 and the number of affordable homes built last year fell by 26%.

Miliband will seek to address this problem by giving local authorities the power to charge developers for sitting on land with planning permission or, if necessary, to purchase it themselves (through compulsory purchase orders). He will say today: “We will back home builders. But we will tell land hoarders with sites that have planning permission that they must use it or lose it.”

2. A new “right to grow” for councils

Miliband will aim to tackle what he calls “home blocker” councils by introducing a new “right to grow” for local authorities whose building plans are currently being stymied by neighbouring councils. He will deliver his speech in Stevenage, where the local authority has seen its plan to build 8,600 homes continually blocked by North Hertfordshire Council. Here’s the key extract:

“Stevenage is a great community – an example of how successful new towns can be. But for decades now it has been waiting to be completed and for decades it has been thwarted by home blocking councils on its borders. But plans to build almost 10,000 desperately-needed homes on the edge of this town have been blocked every single step of the way by North Hertfordshire Council, even though that would take the pressure off other areas in the county.

“There have been consultations galore, planning permission granted and lengthy appeals. The only winners have been lawyers, on whom Stevenage has had to spend more than £500,000 since 2001 on this issue alone.

“North Herts Council is a home blocking council. It is bad for its neighbours, bad for its own residents where the housing waiting list has got ever longer, and bad for those who wish to protect their market towns from over-development. This is a stick-in-the-mud council. But a Labour government will not let desperately needed housing be stuck in the mud of North Hertfordshire.”

He will add: “Of course it is right that local communities have a say about where housing goes. But councils cannot be allowed to frustrate continually the efforts of others councils to get homes built. So the next Labour government will unblock this planning process and unlock the potential to build tens of thousands of new homes where they are needed.” 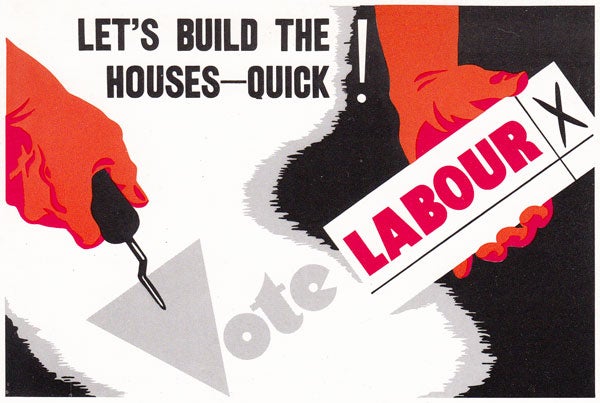 A Labour campaign poster from the 1945 election

Labour plans to help local authorities design and build new towns and garden cities by offering Treasury guarantees modelled on those currently used for Help to Buy and infrastructure projects. As Ed Balls said in his recent speech to the National Housebuilding Council, “George Osborne has shown himself willing to use the government’s balance sheet to guarantee some house building – but in particular demand through guaranteeing household mortgages. And yet we read that the New Towns which you heard about a year ago have stalled.

“The government is providing guarantees of up to £12bn for Help to Buy. He should now step up to the plate to back the supply of new houses in New Towns. Providing guarantees to Development Corporations could be essential to provide backing for a large-scale growth programme to provide confidence, reduce risk and give credibility to the development.”

If Miliband is to reach his target of 200,000 homes, he will not be able to do so without a major expansion of council housing. Labour has promised to “simplify rules surrounding the Housing Revenue Account to give local authorities more flexibility in how existing public funding is spent”.

As shadow London minister Sadiq Khan, who has taken a particular interest in the issue, suggested in my interview with him last week, this could include lifting the cap on council borrowing to allow local authorities to build more social housing (with the borrowing serviced by the income from planned rents). He told me: “That’s one of the things we’re exploring with Ed Balls…Labour councils in London are currently building twice as many houses as Conservative local authorities, three times as many as Liberal Democrt ones, but they’re frustrated that they can’t build more because of the Housing Revenue Account cap.”

The Chartered Institute of Housing estimates that raising the caps by £7bn could enable the construction of 60,000 homes over the next five years, creating 23,500 jobs and adding £5.6bn to the economy.

Other options include allowing local authorities to share services and to pool their borrowing limits (as proposed by Vince Cable), so councils who want to build more, but have reached their limits, are able to do so.

Influenced by the example of France, where more than half of new homes are constructed by their owners (and where 341,808 in total have been built in the last year), Miliband will call for a “self-build” revolution to reduce the dominance of the big four developers and to help expand supply.

The Lyons Commission will look at giving councils the right to stipulate that a portion of development land is sold directly to people who want to build themselves.

But will it be enough?

Miliband’s target of 200,000 homes a year by 2020 might seem ambitious but it’s still below the level the UK needs merely to meet need.

As a recent Policy Exchange report noted, the UK needs a minimum of 1.5 million new homes from 2015 to 2020, or 300,000 a year. Around 221,000 new households are expected to be formed each year over this period and there is a significant backlog.

Thus, even the eventual target spoken of in Labour circles – a million in five years – falls short. As the report said, “1 million homes over five years, around 200,000 homes in England, is actually a failure to keep up with predicted housing need, which is itself likely to be an underestimate of housing demand. Indeed, such language is unhelpful in many respects, as both need and demand are to some extent arbitrary. A young person living at home with their parents but who wants to leave might be seen as having a ‘demand’ or ‘need’ for housing, depending on how this is defined. They are not homeless, but they want to move out.”

But by focusing relentlessly on expanding supply, while the Tories focus on inflating prices through Help to Buy, Miliband has at least got his priorities right.