The Tories were unsurprisingly quick to go on the attack after the latest political donation figures showed that the trade unions were responsible for 77 per cent (£2.4m) of payments to Labour in quarter two. Conservative chairman Grant Shapps declared:

Despite Ed Miliband’s promise of change, these independent figures prove his Labour Party is still dominated by the trade unions. They choose the candidates, pick the leader and remain Labour’s biggest donors – providing three quarters of the Party’s money.

Until Ed Miliband stops taking his union paymasters’ cash, he will be too weak to stand up for hardworking people. Instead, he can only offer what the union barons want in return for their money – the same old Labour policy of more spending, more borrowing and more debt, exactly what got us into this mess in the first place.

And it’s hardworking people who would pay the price with higher mortgage rates and higher bills.

Why Boris Johnson may survive – for now

Thanks to Boris Johnson, we are now a nation of swingers

But the Labour machine has now swung into action, with the party revealing that the Tories received £1,042,970.93 in the last quarter from donors who attended private dinners with David Cameron and other senior Conservative ministers. Of this total, £694,370 was from donors in the financial sector, including investment banker James Lupton, and hedge fund managers David Harding, Michael Farmer and Neil Ostrer 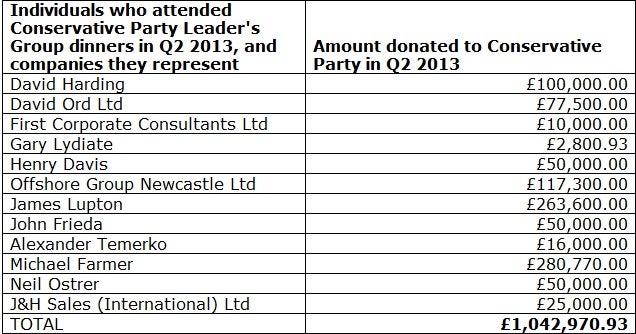 The Tories have raked in over £1 million from private dinners with David Cameron and senior Ministers in the last quarter. And more than two thirds of that comes from the City – the bankers and hedge fund bosses whose taxes David Cameron cut.

Hardworking families are seeing their living standards squeezed, with prices rising faster than wages. Meanwhile David Cameron shows how out of touch he is, standing up for the millionaires who fund his party.

It’s nearly two months since David Cameron promised to publish the results of Lord Gold’s inquiry into the Tories’ dinners for donors. We’re still waiting. It’s time for him to come clean.

Ed Miliband has called for a cap of £5,000 on all donations (including those from trade unions) but with no sign of a cross-party deal in sight, the concern in Labour remains that his union reforms will gift the Tories a significant funding advantage. Party officials expect around 10 per cent of the 2.7 million political levy payers to affiliate themselves to Labour, which would see the party’s income from this source fall from £8m to less than £1m.