In the feminist debate over sex work, it’s often said that we don’t listen enough to the voices of women who work as prostitutes. While that has started to change, thanks to a growing grassroots lobby movement, there is another group whose voices are even more rarely heard in mainstream debates.

The men who pay for sex. The punters.

In a way, that’s peculiar, because there’s an enormous database of men’s thoughts about prostitution. It’s called PunterNet, and it’s been around for more than a decade. It is like a Which? of women you can pay for sex: men give their thoughts on the location, the “friendliness” of the sex worker they choose, the prices they charge and the services on offer.

It was even attacked by Labour’s deputy leader Harriet Harman in 2009:

“There is now a website… where pimps put women on sale for sex and then men who’ve had sex with them put their comments online. It is ‘PunterNet’ and fuels the demand for prostitutes. It is truly degrading and puts women at risk.”

Now, it should be noted that the website itself is garlanded with warnings about reporting any potentially underage or trafficked women, so it at least gestures towards responsibility. And it offers sex workers a right of reply to bad reviews.

But still, some of the posts on it are fairly shocking in their callous lack of interest in the circumstances of the women involved (you can easily find plenty of reviews complaining of being “ripped off” by any obviously unhappy or distressed woman).

Now, The Invisible Men Project is gathering a selection of posts from Punternet to ask a simple question: never mind the debates about the ethics of sex workers themselves, what do you think of the men who pay them? As the site puts it: “Without seeking to prove, disprove or debate choice on the part of the women described, we invite you to consider: what do you think of his choice?” 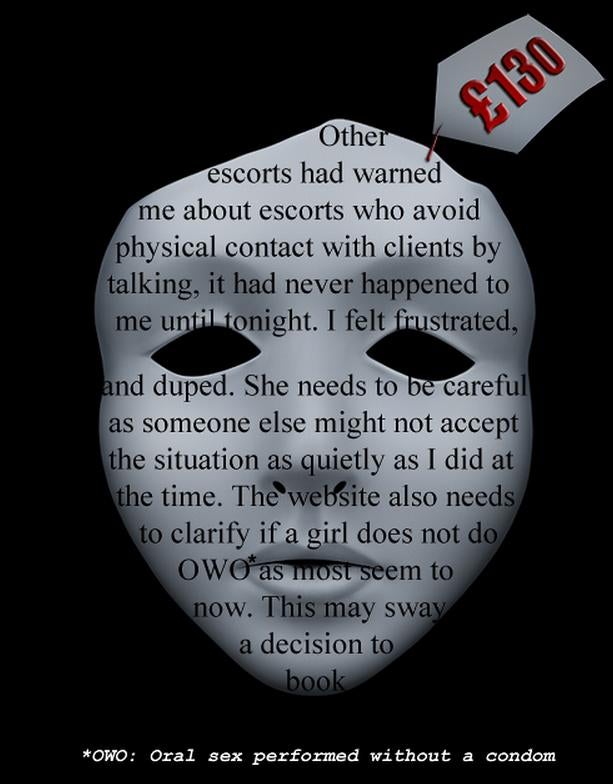 A second reviewer describes choking a woman during oral sex, while another says that he “found her ‘disinterest’ a real turn on”. “She kept herself propped up on her elbows with her back twisted to the right as if she were on guard against some possible dangerous act and needed to be able to escape quickly,” reports another, adding petulantly: “This defensive posturing prevented me from properly enjoying the experience of massaging her.”

The inevitable response to the Invisible Men Project will be that these opinions have been cherry-picked, and are not representative of what I imagine is probably now referred to as “the punting community”. While there is some truth in that – from what I can see, the majority of posts on Punternet are merely quietly depressing, rather than frankly outrageous – there is one thing to remember.

The chokers and the “idiots” and the men who are still happy to have sex with a tired, unhappy, defensive woman all exist. And if you are a sex worker, how do you know whether your next client will be one of them?