Trigger warning: graphic descriptions of rape, and pixellated images from the night in question.

It lasted for hours. The pictures circulated online show the unconscious teenage girl hung like a shot steer between two laughing young men, Trent Mays and Ma’lik Richmond, who were convicted this week of driving her from party to party, raping her, assaulting her, and filming themselves doing so. Videos from the night include an extended tape of a friend of the attackers in drunken spasms of joy about just how ‘dead’ the girl looked as she was handed around. “She’s deader than OJ’s wife!” he giggles to himself as his mates film him. It was sadistic young men like this with whom the mainstream media expressed immediate sympathy following the guilty verdict.

Here, there was no question that Mays and Richmond are guilty: there is enough film, photographic and text message evidence to make the case clear. The arguments in their defence, instead, revolve around the notion that these boys, beloved athletes in a town where football is everything, did nothing wrong when they assaulted their helpless victim. They are tragic heroes who were just having fun, like young men do, and the pictures prove it. Everyone looks so happy. High-profile rape cases have happened in American football towns many times before – remember the cheerleader who was forced to cheer for her rapist? – but Steubenville is different. The pictures make it different. What the Steubenville footage recalls most chillingly is the torture photographs from Abu Ghraib prison almost a decade earlier, showing American soldiers in Iraq smiling chummily around the prone bodies of political prisoners.

Steubenville is rape culture’s Abu Ghraib moment. It’s the moment when America and the world are being forced, despite ourselves, to confront the real human horror of the rapes and sexual assaults that take place in their thousands every day in our communities.

Susan Sontag observed of the Abu Ghraib atrocities that “the horror of what is shown in the photographs cannot be separated from the horror that the photographs were taken – with the perpetrators posing, gloating, over their helpless captives. If there is something comparable to what these pictures show it would be some of the photographs of black victims of lynching taken between the 1880’s and 1930’s, which show Americans grinning beneath the naked mutilated body of a black man or woman hanging behind them from a tree. The lynching photographs were souvenirs of a collective action whose participants felt perfectly justified in what they had done. So are the pictures from Abu Ghraib.”

The pictures from Steubenville don’t just show a girl being raped. They show that rape being condoned, encouraged, celebrated. What type of culture could possibly produce such pictures? Only one in which women’s autonomy and right to safety counts for so little that these rapists, and those who held the cameras, felt themselves ‘perfectly justified’. Only one in which rape and sexual humiliation of women and girls is so normalised that it does not register as a crime in the minds of the assailants. Only one in which victims are powerless, silenced, dismissed. It is impossible to imagine that in such a culture, assault and humiliation of this kind would not be routine – and indeed, the most conservative estimates suggest that ninety thousand women and ten thousand men are raped in the United States alone every year. That’s what makes the Steubenville case so very uncomfortable – and so important.

Here we have incontrovertible evidence of happy young people not only hurting and humiliating others, but taking pleasure in it, posing with their victims. The Abu Ghraib torture pictures were trophies. The Steubenville rape photos are trophies. They’re mementoes of what must have felt, at the time, like everyone was having the sort of fun they’d want to remember, the sort of fun they’d want to prove to themselves and others later. The Steubenville rapists had fun, and they broadcast that fun to the world. They were confident that nothing could touch them, so baffled by the idea of punishment that they wept like children in court.

Pictures don’t just record reality. They change it. They change us as we take them and consume them. It matters not just that we have photographic evidence of a girl being raped, but that someone took pictures of the assault happening to send to their friends as memories of a jolly night gone a bit hairy. The Ohio teenager who is now receiving death threats for reporting her rape is far from the only young woman to have her assault recorded for posterity. In the past five years, rapes and sexual assaults involving one or more attacker or involved bystander stepping back to pull out a smartphone have proliferated. What makes these men so sure of their inviolable right to stick their fingers and cocks into any part of any female they can hold down that they actually make and distribute images of each other doing so? Rape culture. That’s what rape culture is. The cultural acceptance of rape. 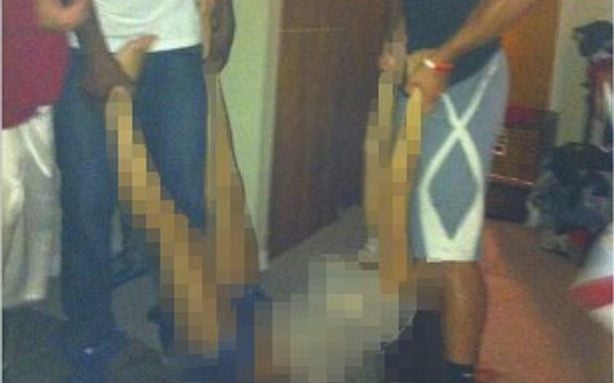 This image of “Jane Doe” was shared over social media.

The Steubenville rapists claim that, when they drove a passed-out girl from party to party, slinging her into and out-of cars like a deflated sex-dolly and sticking their fingers inside her, they didn’t know they were doing anything wrong. That’s plausible, although it’s no defence. It’s a plausible if, and only if, you have internalised the assumption that women are not real human beings, just bodies to be manipulated with or without consent, pieces of wet and willing meat there for you to use for your pleasure. There’s a word for what happens when one group of people sees another as less than human and insists on its right to hurt and humiliate them for fun. It’s an everyday word that is often misused to refer to something outside of ourselves. The word is ‘evil’.

This particular evil has been rotting at the fractious heart of Western culture for so long that it barely registers as abnormal, and the initial emotion when it is challenged is rage. Rage that anyone dare question the notion that men’s ‘bright futures’ matter more than women’s right not to be attacked and degraded. It’s an evil that believes that men work and play sports and make an impact on the world and women are there to get fucked. America has been raised on that belief, and like any dogma it can turn ugly when challenged. Jane Doe, whose real name was revealed on Fox news yesterday, has been receiving death threats, and so have her family. After the verdict was handed down, the internet lit up with ugly messages of slut-shaming and solidarity with her attackers: “Remember, kids, if you’re drunk/slutty at a party and embarrassed later, just say you got raped!” wrote @jimmyontheradio. Another, @zJosiah, said: “I feel bad for the two young guys, Mays and Richmond, they did what most people in their situation would have done.”

Yes, it is possible to feel a sick spasm of pity for these young men whose tears in the courtroom were described at such melodramatic length by major news outlets. It is possible to feel pity for those who do violent acts, who hurt and shame others simply because they know nobody’s going to stop them and it seems like fun. Young people can get carried away in times of war, and here I include what we must surely think of in these circumstances as a gender war, especially when they’re on the winning team – and these boys were used to winning. Young people get carried away. But not always. And that ‘not always’ is where pity stops like bile in the throat.

In every situation where atrocity is normalised, in every death-camp and gulag and apartheid city, there are those who refuse to participate. The soldier who ignores the kill order. The prison guard who walks away. The families who risk their safety to shelter refugees. The men and boys who see rape and violence occurring and have the courage to say ‘stop’.

We have sympathy for those who lack that sort of courage only because we worry, even the best of us worry, that there might be circumstances in which we, too, would overlook evil. That’s the question facing every man and not a few women in America right now as the enormity of rape culture begins to dawn. It’s a question of cowardice, and of character. Something is going on – the casual rape and abuse and dehumanisation of women and girls, and some men –  that’s so monstrous that to take its magnitude seriously would implicate a great many of us. The question is whether we have the courage to face it – this time.

Those attacking the Steubenville Jane Doe online, defending her rapists, lamenting the destruction of their ‘bright futures’, are cowards. They are cowards who are afraid of what will happen if systematic injustice is acknowledged, and human history is crawling with their kind. Right now that cowardice is being weaponised and used against women and girls, used to shame us into silence, to stop us from speaking out about rape culture as we have just begun to do in an organised fashion. So many of us wonder whether we would be brave enough to stand up in the face of evil. Whether we would allow it to continue or join in the rage. Well, this is the moment. This is our test. Anyone can be outspoken about Steubenville after the fact. The question is: who will stand up when the next Jane Doe is attacked, without expectation of thanks or acclaim, at risk of derision and ostracism or worse, and speak out about all the other Steubenvilles that are still taking place, and will continue to until enough people say ‘stop’?

Well, this is the moment. This is our test. Before another Jane Doe gets hurt, before more young rapists can tearfully claim they “didn’t know”, it’s on us all – men and boys and everyone who loves them – to stand and be counted.