At five minutes to eight last night, Eastern time, the internet imploded. Or at least, that corner of the internet that was attempting to access the live-stream for the promised “Rumble in the Air-Conditioned Auditorium” between Fox News’ patriarch Bill O’Reilly and the Daily Show‘s Jon Stewart. Under the pressure of “hundreds of thousands” of last-minute users trying to access the live feed (which cost $4.95, with some proceeds for charity), Nox Solutions, which was operating the stream, came under heavy fire from dissatisfied social media users. “Screw you NOX SOLUTIONS”, said one on the event’s Facebook page. “This is ridiculous this is PATHETIC – off to Reddit to fix, mock and hopefully find a solution,” said another.

The Wall Street Journal‘s live-blog of the event was caught in the blackout. The entry for 8:24 reads: “I apologize for this live blog not being able to cover this event so far. We have already contacted the organizers to ask what’s going on with their site, which appears to have crashed for lots of other users. Nobody has returned our message yet.”

I managed to find a feed eventually, through a slightly shady web-TV outfit based, as far as I could tell, out of the Ukraine, with a shaky video feed but a solid audio, which was better than a lot of people were doing. The showdown, when I finally got in to it, was a hell of a lot more fun than last Wednesday’s presidential debate between Barack Obama and Mitt Romney.

Bill O’Reilly is probably the most influential media figure on the right. His Fox News show has been top of the ratings for more than ten years now, while more bombastic anchors like Glenn Beck have come and gone. Meanwhile Stewart, despite vehemently denying his show’s political influence – “I’m just a comedian,” he likes to say in interviews, slightly disingenuously – is nonetheless without a doubt the most influential media figure on the left, with viewing figures similar to that of O’Reilly, and the Daily Show acts as a stalwart check on the excesses of Fox News. Both command audiences of between two and three million.

Stewart and O’Reilly have already crossed swords on the other’s shows several times, and these are always enjoyable conflicts. While there were a lot of lines played just for laughs – Stewart said the Fox News building had the Eye of Sauron on its roof, and raised himself up and down at various intervals on a platform lift behind his podium as part of a running joke about their height difference (Stewart is 5’7”, O’Reilly 6’4”, leading the former to call the latter a “yeti”). O’Reilly came with bizarre placards – one with the words “Iran: not frightened” as well as a cartoon picture of a bomb.

But despite this levity, much of the evening had a serious tone. The biggest applause of the evening came from a line of Stewart’s. “Why is it that if you take advantage of a tax break, you’re a smart businessman, but if you take advantage of something you need to not go hungry, you’re a moocher?” he demanded. When O’Reilly said that government was good at running things like the military only because it had a “tradition” of doing so, Stewart, leaning back and unsmiling, called it “the silliest thing you’ve said all evening.”

Stewart scored a crushing blow when the moderator asked who each of them would save, rather surreally, if “America was burning.” “Oprah,” answered O’Reilly. “She’s worth a hundred million.” Stewart raised an eyebrow, and said cuttingly: “well, I’d save my family. But listen, Oprah’s a great answer too.”

The Daily Show presenter was especially good at courting the online as well as the present audience. “Somebody better be live-tweeting this,” he said at one point. “I don’t care if Gerry and the Pacemakers attacked the embassy,” said O’Reilly a bit later, and in answer Stewart waved expansively at the cameras. “This is on the internet, Bill,” he said. “I don’t think that’s really the reference you want to be making.” “Alright then,” answered O’Reilly dryly but uncertainly. “I don’t care if… um, Little Wayne attacked the embassy.”

The most interesting thing really, of course, was what last night said about the debates it emulated: it highlighted the insipid, starchy care with which a Presidential candidate must conduct himself. Last night sparkled with all the ridiculousness and fire that was lacking last Wednesday, because the media pressure on a candidate not to make anything which can be interpreted as a gaffe. Romney’s perceived win on Wednesday was because he looked most like Jon Stewart and Bill O’Reilly did last night: like he was enjoying himself. Facts (arguably) be damned.

Obama looked professorial and staid by comparison, and in an age where the best lines are far more important than the best policies this was fatal. It is Jon Stewart who the President should be running debate-prep with, not John Kerry. 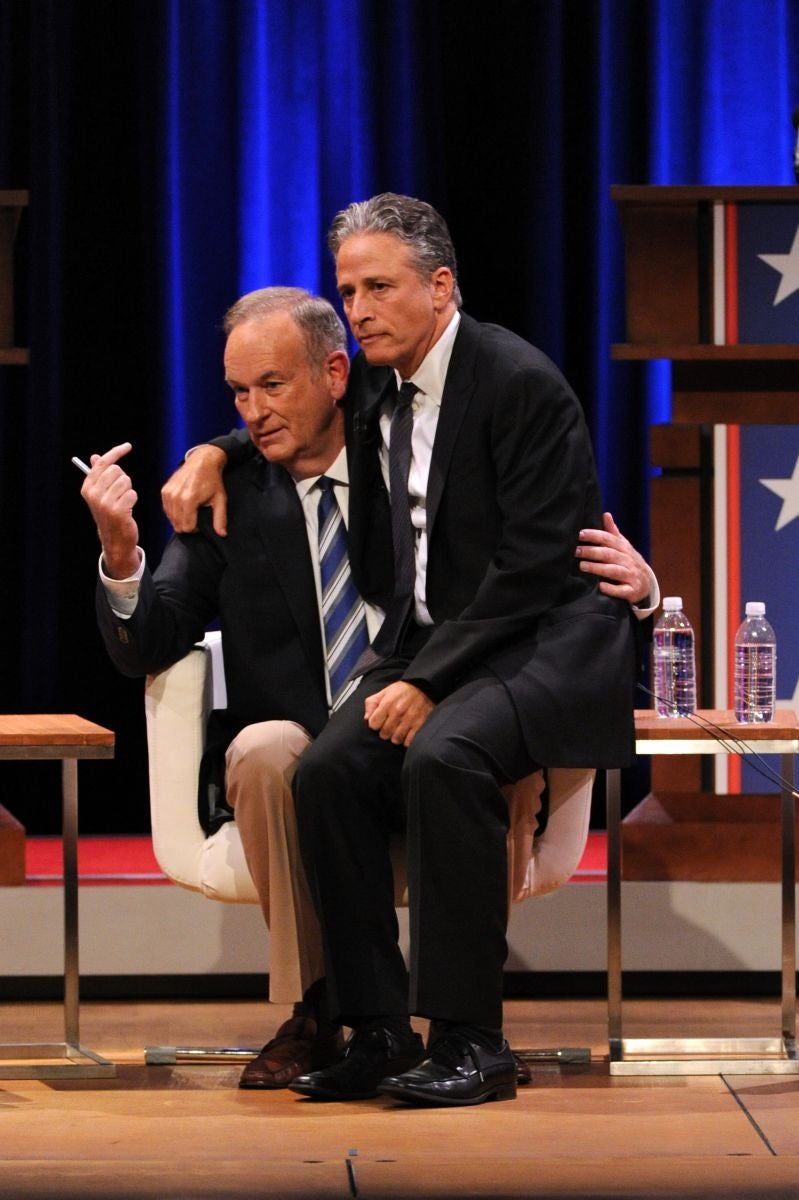