There are few boasts that Conservative politicians enjoy making more than “income inequality has fallen”. It suggests that austerity, far from widening the gap between the rich and the poor, has reduced it, and it casts the Tories as “the party of the many”.

But this is far from the full picture. Though inequality remains below its pre-crash levels, it has begun to rise once more. In 2018, the Gini coefficient, a scale on which 0 is absolute equality and 100 is pure inequality, rose from 31.4 to 32.5 (the largest increase since 2013) according to the Office for National Statistics. Owing to welfare cuts and higher pay at the top, the average income for the richest fifth in Britain increased by 4.7 per cent, while that of the poorest fifth fell by 1.6 per cent.

Were it not for the stagnation of average earnings, which has narrowed the gap between the middle and bottom, overall inequality would have increased since the crash. (Inequality predominantly surged during the 1980s, rising from 25.0 in 1979 to 37.0 by the end of the decade.) 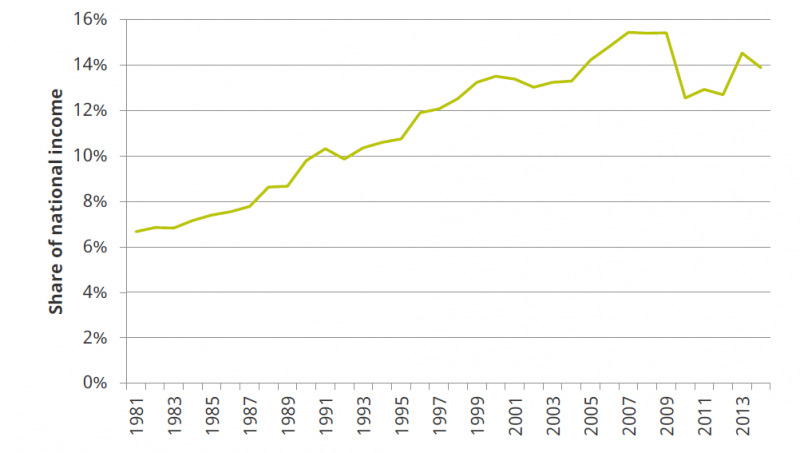 Over the same period, the fortunes of the top 1 per cent, as a new Institute for Fiscal Studies report charts, have continued to rise. The share of national income held by this group now stands at a near-record level of 14 per cent. While the median UK salary is £28,500, a pre-tax income of at least £120,000 is required to enter the top 1 per cent.

Though, as the free-market right are fond of noting, the top 1 per cent pay 27 per cent of all income tax, which reflects both their exorbitant earnings and the extent of low pay in Britain: most of those in poverty are now working, rather than unemployed, and 43 per cent of the adult population (including the retired) earn too little to pay income tax. Significantly, partnership and dividend income, which are taxed at lower rates than regular salaries, account for over a quarter of the total income of the top 1 per cent (dividends are taxed at a maximum rate of 38.1 per cent and capital gains at 20 per cent, compared to the top income tax rate of 45 per cent).

Inequality is more than merely an abstract concern. As works such as 2009’s The Spirit Level have shown, inequality is associated with a range of economic and social maladies, including financial instability, crime, obesity, drug abuse, social immobility and educational failure.

Were UK inequality merely static, it would be troubling enough. That it is rising once more suggests a grim era could yet become grimmer.