VAGINA. VAGINA VAGINA VAGINA VAGINA. Whether you did Latin at school or not, you all know what it means. VAGINAAAAAAA. Say it with us, folks. Shout it from your office cubicle, your freelancer’s Starbucks table, your library cubby hole (also a euphemism for VAGINA).

The word ‘VAGINA’ is seeing a resurgence. Perhaps because our VAGINAS, especially those of our American sisters are, much like Stalingrad, increasingly under siege (Stalingrad is another euphemism for VAGINA). State representative Lisa Brown hilariously offended some Republicans last week when she had the temerity to utter the word during a ridiculously euphemistic debate about female contraception and abortion. ‘I wouldn’t use it [VAGINA] in mixed company,’ said her fellow politician Mike Callton, as though us women never dare to speak of the things. In fact, the women we know talk about theirs a lot, whether in the context of a one night stand post-mortem (‘my VAGINA was out of control’) or medical ‘lady-problems’ (‘something’s rotten in the state of my VAGINA.’)

We did our own research into the lexical world of VAGINA, and this produced some interesting results. ‘Fanny’ is still going strong enough to keep it out of the popular names charts that it once dominated. ‘Flower’ definitely gets a shout out, thanks to the efforts of optimists everywhere and Georgia O’Keeffe. We encountered two Italian exchange students who told us that the standard slang term for down there in Italy is ‘potato’ – a visual we’re finding it slightly difficult to get our heads around. A schoolgirl, meanwhile, insisted that her mother referred to it as her ‘fairy’, which is just begging for years of psychoanalysis later in life when she realises that at the same age, she believed that a fairy took her teeth in exchange for money. Finally – the mystery of where those milk teeth disappear to is solved (and with it, the origins of the possibly mythological disease ‘VAGINA dentata’).

The fact that Republicans are trying to legislate something they are unwilling to even say adds extra layers of hilarity to VAGINAgate. The feminist backlash to the suggestion of transvaginal probes involved women inundating Senator Ryan McDoogle’s Facebook page with detailed information about their lady bits. ‘During my last period, I had to use extra large tampons during some chunky blood issues’, said one post. ‘Just a quick hello to let you know that I’m currently ovulating!’ said another. The same happened to Texas Governor Rick Perry, who since deleting the posts became the lucky recipient of oodles of hand-knitted and crocheted VAGINAS. Then there was the viral video, ‘Republicans, Get in my VAGINA.’ VAGINAS are back, and they mean business.

Feminists have long pondered the question of what one should call ones ladybits. From the Inga Muscio classic Cunt: A Declaration of Independence to Dr Catherine Blackledge’s The Story of V, to Caitlin Moran’s How to Be a Woman, women have been trying to wrestle their vaginas out of male hands and away from male terms which don’t belong to us for ages now. The fact that ‘VAGINA’ is back with a vengeance can only be good in the face of patronising advertising such as the below, from a well-known feminine hygiene brand that we don’t care to publicise here. They suggest a variety of terms, ranging from ‘mini’ to ‘twinkle’ to ‘hoo ha’, before uttering the immortal tagline ‘whatever you call it, make sure you love it.’ VOM. 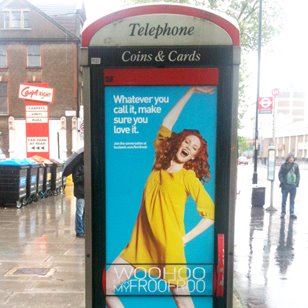 In a world conspicuously devoid of adverts for wiener cleaner, it’s a bit disconcerting to see ‘Woo hoo for my froo froo!’ posted on the side of telephone boxes throughout the country. Celebrating that you have a VAGINA: sure, why not? Celebrating because you got the right product to make your natural VAGINA less disgusting: not exactly the passive aggressive message we relish. The whole ‘froo froo’ shebang has led to an internet-wide speculation on how you should refer to your lady parts – with equally cutesy results.

Such terms are perhaps just about acceptable when you have a little girl with a tricycle injury and don’t want her uttering the C-bomb. But for grown women the advert has an infantalising effect. The potential for hilarity (pastrami curtains, anyone?) has been eschewed in favour of prudishness. Fundamentalist Christians are no better, as the online post ’51 Christian Friendly Terms For VAGINA’, which jokingly suggests such legends as ‘sin bucket’, ‘devil sponge’ and ‘neighbour of anus’, goes to show. And since the once hilarious ineedanotherwordforvagina.com opened itself (snort!) to submissions, it has lost much of its pizzazz to immature pranksters repeatedly suggesting ‘Nick Clegg.’

The problem with euphemising the term ‘VAGINA’ is that it takes serious discussion of them off to the menu. Suddenly they’re less ‘a la carte’ and more ‘all you can eat’. How on earth are we supposed to retain possession of them if we can’t even call them what they are? Which is why it is of utmost importance that, if you can bring yourself to do it, you stop referring to your ‘la-la’ and start using the proper anatomical terminology. We wouldn’t go so far as to suggest that you inundate the Facebook page of that ‘feminine hygiene product’ (read: vagina perfume) with ‘VULVA’ posts, but here’s the link and a labelled diagram of the general area.

Of course, the implication that you can’t really love your VAGINA unless you use a certain product is deeply impertinent. Half the population carry them around in their pants without freaking out, yet if VAGINAS were supposed to complement the saccharine, flower-gathering view of everyday women by smelling like a lavender patch, they would. But guess what, patriarchy? We’re not candy-sweet and we don’t come in washing-detergent flavours!

Until they finally realised that it annihilated everything good inside your flange, douching that made you smell detergent-like was an incredibly popular activity, promoted mostly by VAGINA-haters in the US. And considering the furore over Rep. Lisa Brown being banned from saying “vagina”, it’s no wonder America were at the forefront (pun intended) of fanny denial. Pussy polishers that claim to say woo woo to your frou frou are just the natural extension of douching, which should have died a death before we even knew they did more harm than good.

In light of this, it’s of utmost importance that you learn to call your VAGINA what it is, and furthermore, accept it in its natural state. VAGINAS are a wonderful arrangement of flaps capable of the most magnificent things, just as God, in Her infinite wisdom, intended. Once you do that, you’ll realise that anyone who says otherwise is most likely a DOUCHEBAG.