On 11 March, as Rishi Sunak delivered his first Budget as Chancellor – a mere 27 days after his appointment – he declared: “The story of this government has been the story of a national jobs miracle.” The socially undistanced Conservative MPs around him roared with approval.

For years, the UK’s record employment rate was the Conservative government’s proudest boast. Living standards remained below their 2008 level, GDP growth was mediocre and the budget deficit was not eliminated. But millions of new jobs were created.

This apparent triumph was never as impressive as it first appeared. Two-thirds of the growth in jobs was accounted for by self-employment, zero-hours contracts and agency work. As living standards fell or stagnated, more women, lone parents and older people entered the labour market in an attempt to preserve their spending power.

Yet the headline figures still provided the Conservatives with a potent narrative. In an audacious piece of political appropriation, in 2014 they claimed the mantle of “full employment” – a goal traditionally associated with centre-left governments. The memory of the 1980s and early 1990s – when Tory rule became synonymous with mass joblessness – had, they hoped, been banished.

But the story of this summer has been one of job destruction, not job creation. In the first half of this year the UK endured the worst recession of any G7 country (GDP fell by 22.1 per cent), and almost every day has brought further redundancies: 9,000 at Rolls-Royce, 7,000 at Marks & Spencer, 6,500 at Debenhams, 2,800 at Pret A Manger, and 1,500 at WHSmith. The total number of paid employees in the UK fell by 730,000 between March and July, the largest quarterly decline since 2009. 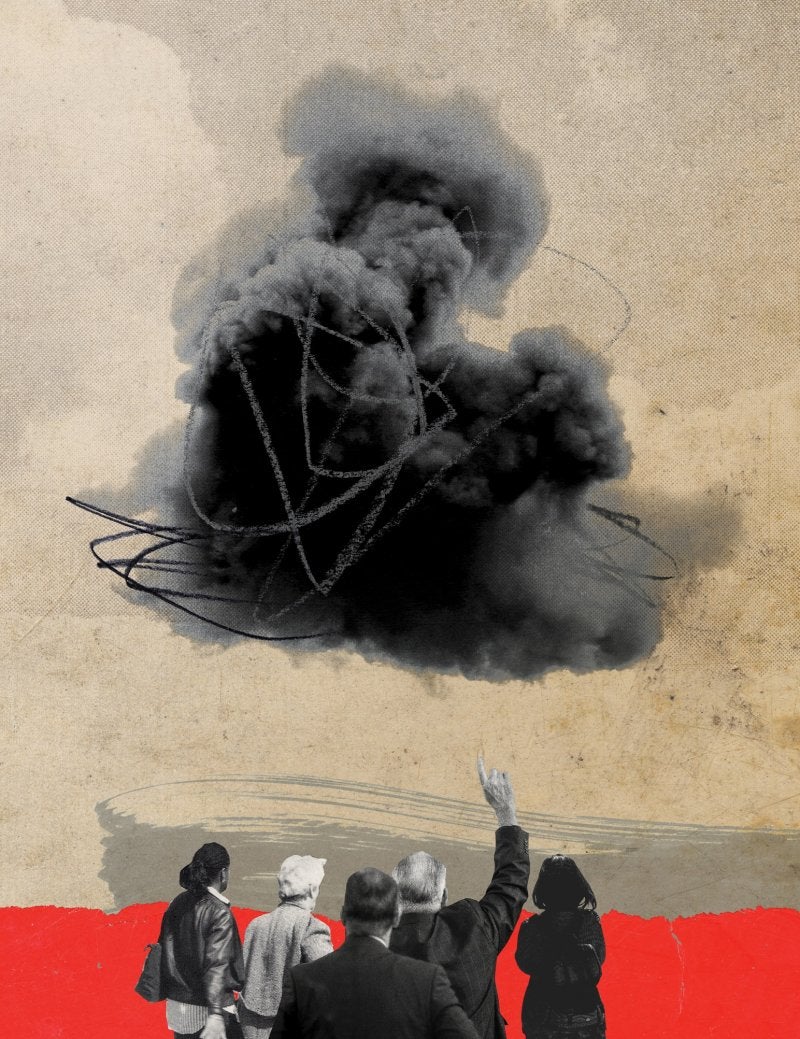 Yet as if reflecting a parallel universe, the unemployment rate has remained at a near-record low of 3.9 per cent. In the US, by contrast, the jobless rate rose to 14.7 per cent in April – the highest level since the Great Depression – and is currently 10.2 per cent. But Britain’s record is flattered by two factors: the first is an increase in people classed as economically inactive between April and June: 82,000 more are out of work but are not looking for work. The second is one of the most dramatic economic interventions in postwar history: the Job Retention Scheme.

The furlough scheme, as it has become known, was an enlightened act of statecraft. Faced with a lethal pandemic, and the need to place the economy in cryogenic suspension, the government undertook to pay 80 per cent of furloughed workers’ wages (up to a maximum of £2,500 a month). The speed and clarity with which Sunak announced the programme on 20 March contrasted with the late and haphazard lockdown presided over by Boris Johnson. Len McCluskey, the general secretary of Unite, was among the Conservatives’ unlikely cheerleaders. “Rishi Sunak’s wage support measures are a historic first for this country, but are bold and very much necessary,” he said.

In May, after a senior government source complained that “people are addicted to the scheme”, the Chancellor distanced himself from such briefings and extended the programme until October. Combined with the Eat Out to Help Out scheme, the policy helped make Sunak the UK’s most popular politician (a recent Ipsos Mori poll gave him a net approval rating of +47 compared to Johnson’s zero).

But the furlough programme – which has supported a total of 9.6 million jobs since its introduction – is now being unwound. Since 1 August, firms have had to pay their employees’ National Insurance and pension contributions – one cause of the tide of summer redundancies. Then, on 1 September, the government’s wage subsidy fell to 70 per cent (with employers required to pay the remaining 10 per cent). At the start of next month it will fall to 60 per cent, before the scheme is ended entirely on 31 October.

It is then that the four million workers that think tank the Resolution Foundation estimates are still reliant on the programme will be exposed to the vagaries of the market. As autumn approaches, the UK is once more facing mass unemployment. For now, like the cartoon character Wile E Coyote, the labour market is suspended in mid-air – the risk is that it will soon fall to earth.

The last time UK unemployment reached nearly 12 per cent was in 1984. Ronald Reagan was US president, Arthur Scargill and Margaret Thatcher were fighting for supremacy amid the miners’ strike, and Prince released Purple Rain. It is to this era that the Office for Budget Responsibility forecasts the UK will return, with joblessness peaking at 11.9 per cent in the final quarter of this year – more than three times its pre-crisis level. The Bank of England is more optimistic: it estimates that unemployment will peak at 7.5 per cent. But this would still be nearly double the current rate.

The risk is perhaps greatest for the 800,000 young people who have left school or university this year – the Resolution Foundation has estimated that youth unemployment could rise by 640,000 this year, taking the total above one million.

“A spell of unemployment when you’re young creates a permanent scar, not a temporary blemish,” Professor David Blanchflower, a former member of the Bank of England’s monetary policy committee, warned when we spoke. “A spell of unemployment when you’re 40 doesn’t appear to have had an effect when you’re 50, you get over it. The problem for the young is if they don’t get a foothold in the labour market, and make the transition from school to work, it permanently scars them and it hurts us – everyone else is hurt.”

When Sunak delivered his summer statement on 8 July, he declared: “I want every person in this House and in the country to know that I will never accept unemployment as an unavoidable outcome.” His words contrasted with those of former Conservative chancellor Norman Lamont, who in 1991 remarked that “rising unemployment” was “a price well worth paying” to reduce inflation.

But there was a marked disparity between Sunak’s rhetoric and the modesty of the fiscal measures he announced, such as the £1,000 Jobs Retention Bonus for each furloughed worker companies bring back. A recent survey by Lloyds Bank found that only 18 per cent of businesses with furloughed workers expect to retain all their staff. 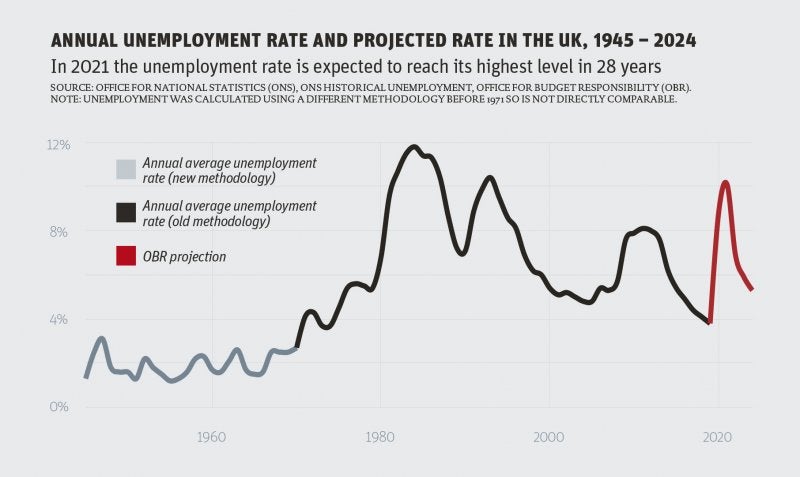 Elsewhere in Europe, countries including Germany, France and Italy have extended their versions of the furlough scheme until the end of this year or beyond. Not for the first time during the pandemic, the UK appears a troubling outlier.

After the 2008 financial crisis, Germany was the only G7 country not to suffer a fall in employment. This remarkable achievement was attributed to the Kurzarbeit (or “short work”) programme through which the government subsidises the wages of workers retained on a part-time basis. The scheme – which is available to companies at all times, not only during global crises – was limited to claims lasting a maximum of 12 months, but has now been extended by Angela Merkel’s government to 24 months. Employees who have been partially furloughed for seven months or more receive up to 80 per cent of lost earnings (or 87 per cent if they have children).

Why, then, is Sunak, who originally emulated the German model, now retreating? Economists cite two factors that are shaping the Chancellor’s approach. The first is the extent of government borrowing: the national debt has surpassed 100 per cent of GDP for the first time since 1963. Sunak, an instinctive fiscal conservative who argued in 2015 that “in normal times public spending should not exceed 37 per cent of GDP”, has made it his aim to “right the ship”. He intends to achieve this through tax rises on the wealthy and on companies – Treasury proposals include increasing corporation tax and capital gains tax – but also by curbing state spending.

While the first factor reflects the household economics of Margaret Thatcher and George Osborne, the second is based on the Austrian economist Joseph Schumpeter’s idea of “creative destruction”, which “continuously revolutionises the economic structure from within, incessantly destroying the old one, incessantly creating a new one”. As Carys Roberts, executive director of the Institute for Public Policy Research (IPPR), told me: “The argument is that we can’t just freeze the [pre-Covid-19] economy and preserve it as it was, that we have to plunge forward into the new economy and embrace creative destruction. It’s a very neoliberal approach: for a really strong economy we need to unleash the market.” 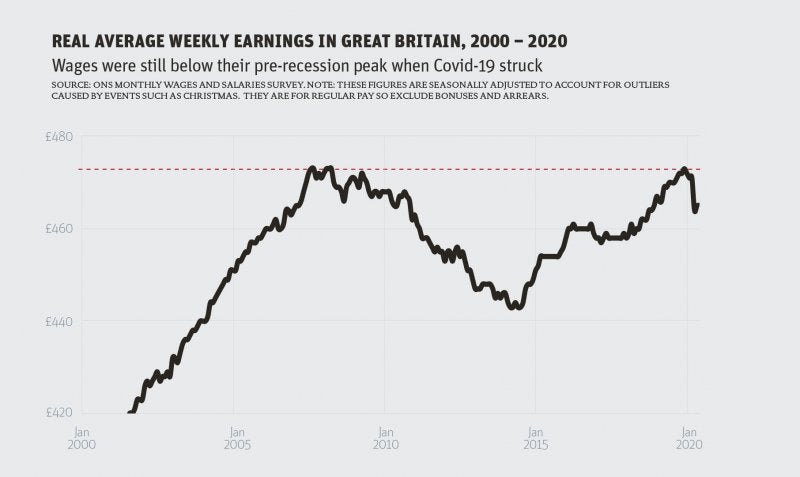 Both halves of this intellectual logic are flawed. Though the UK’s borrowing has rarely been higher it has also rarely been cheaper. Such is the demand for British debt from investors that this summer the government has sold bonds at negative interest rates (in other words, investors are paying the government to take their money). The National Institute of Economic and Social Research has estimated that extending the furlough scheme until the middle of next year would likely pay for itself by reducing the number of redundancies (which increase benefit claims and reduce tax revenue).

Economists are divided on whether the furlough scheme should simply be extended but most agree that a wage subsidy programme – whether focused on part-time work or the hardest-hit sectors – is essential. Without such intervention, the IPPR has estimated, “up to two million jobs could be lost, not because business owners are not working hard or smart enough, but because of continuing social distancing measures.”

Torsten Bell, the chief executive of the Resolution Foundation, warned against overestimating the capacity of the UK’s flexible labour market, or “creative destruction”, to generate new jobs.

“Retail and restaurant activity is going to reallocate, to some extent, from city centres to local residential high streets,” he told me. “Some of that will happen but we shouldn’t be gung-ho about how painful this is for people along the way. From a human perspective it really matters whether unemployment hits 8 per cent or 10 per cent now; that’s a lot of lives.”

In an economy, as the New York Times columnist Paul Krugman likes to remark, “my spending is your income and your spending is my income.” For this reason, a rise in unemployment has negative knock-on effects. This is particularly true in the UK, where benefit payments as a share of previous earnings are among the lowest in the OECD (even after temporary increases). A spike in joblessness would help thwart the UK’s recovery.

Faced with the imminent end of the furlough scheme, the government is urging people to return to their offices in order to help sustain adjacent cafés, bars and restaurants. But combined with the reopening of schools, increased mobility will heighten the risk of a second wave – the greatest possible anti-stimulus. In these circumstances, the unconditional end of the furlough scheme appears reckless.

Sunak has insisted that while “many more” people will lose their jobs, “nobody will be left without hope and opportunity.” In the long run, he implies, the storm will pass. But as JM Keynes observed, “in the long run we are all dead.”

The government has already presided over one avoidable human tragedy. Had the lockdown been imposed one week earlier, epidemiologists estimate, tens of thousands of lives could have been saved. Now, as the threat of mass unemployment draws nearer, the risk is that the government is once more sleepwalking into catastrophe.

This article appears in the 02 Sep 2020 issue of the New Statesman, Britain isn't working