I don’t remember when exactly I learned to feel comfortable around strangers. Perhaps it is something gleaned from the kindnesses shown to me by so many. But last month I found that instinct being called upon afresh when a Hong Kong refugee arrived in my living room early one morning, straight from Heathrow.

As I was going to bed the previous night, a WhatsApp message had jumped into view: “My friend in London needs place to stay,” it read, followed by a row of face-palm emojis. The text was sent by a young artist-waitress I’d met during a year working in Hong Kong. She wanted to know if the unnamed man could crash on my sofa for a night – maybe more – while she searched for others to support him during his asylum application process.

There were numerous reasons why I wasn’t sure I could say yes. Not least that social distancing during Covid-19 has meant that any visit, even by close friends, adds a certain weight to the chest. Yet there were also many more factors which meant I knew I couldn’t say no.

The UK is home to only 1 per cent of the world’s 29.6 million refugees, with Germany and France both receiving over twice the annual number of applications. But seeking asylum in the UK through government decision-making alone has become increasingly fraught: in the year to June 2020, the proportion of appeals against asylum decisions allowed by the courts reached its highest point in a decade.

Just this summer, the rising numbers of refugees taking dinghies across the English Channel (a result of fewer lorries crossing during the pandemic, rather than an overall increase) was met with fresh anti-migration outrage. “Invading migrants” was how 23 Conservative MPs and two peers described the situation, in a letter urging ministers to impose tougher border controls. The Daily Mail referred to an anonymous “influx”.

[see also: Labour won’t win by turning its back on refugees]

The faceless aliens invoked by right-wing politicians and media couldn’t be further, however, from the dignified and brave individuals I’ve been privileged enough to meet over the years.

They include the Syrian English literature graduate (with interrupted life-dreams and a love of the novel Adam Bede), whom I encountered in Turkey’s Gaziantep. The 13-year-old from Afghanistan, with large brown eyes, who was sleeping rough in the camps on the Calais border. And perhaps, to some extent, they also include my own grandfather, whose Jewish mother fled to Britain from Romania in the 1920s when he was three years old.

During Hong Kong’s pro-democracy protests last year, I witnessed the fear many felt at the prospect of a crackdown by the Chinese government, as well as the overwhelming idealism with which many fought to defend their freedoms in the tear-gassed streets. Marches, anthems, umbrellas, bricks, catapults and political campaigning were all called upon to help in the struggle – and included, on one particularly memorable night, the formation of a vast human-chain overlooking the city, singing and shining lights far out into the darkened sky.

All this meant that when Timothy – as he introduced himself – arrived on my doorstep, I knew I didn’t want to let down Hong Kongers’ spirit of solidarity.

Dressed in a faded red T-shirt and baggy black sweatpants, he looked much younger than his 26 years, and something about the way his black hair flopped over his forehead reassured me I had no need to be afraid. Although that still didn’t remove the feelings of rising awkwardness.

“Would you like a banana? Or a boiled egg?” I asked tentatively, searching for ways to overcome the feelings of vulnerability that had swept in alongside his two bulging suitcases. (Vulnerable for him because he was now reliant on the protection of a foreign nation; vulnerable for me because I felt so ill-equipped to help provide it.). “An egg”, he said, and a banana, and a cup of tea.

He promptly crashed out on the sofa; a red bundle of mystery, snoring while I worked. When he awoke, there were calls to be made in Cantonese to family and to advisers, as well as possessions to be checked and rearranged: clothes, books on Chinese law, a photo of his grandfather, six boxes of Covid-19 face-masks, and a projector – so he could one day “show people the protests’ story”.

And then, finally, over a chicken tikka-masala dinner, he told me why he’d come. After the 2014 protests in Hong Kong demanding more transparent elections, relations between the territory and the central Chinese government remained tense. The sense of unrest found expression at sporting events and football matches, where some fans would boo when China’s national anthem was played.

A keen football enthusiast, Timothy was interviewed by Hong Kong’s i-cable news channel in early 2019 about his opposition to a proposed new law to criminalise insults against the anthem. Then that summer, things quickly escalated: wider unrest spread across the city in response to a government plan to allow extraditions to the mainland, and Timothy’s interview made him a target of abuse for supporters of the Chinese government. 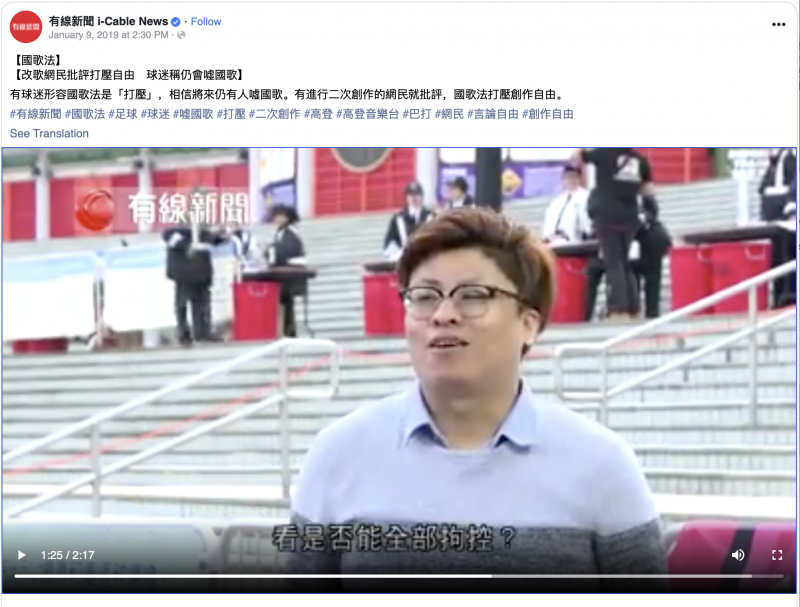 His photo was taken in the street and his phone number shared on HKLeaks, a website created for the purpose of “doxxing” anti-government protesters by publishing their personal details. After that, insults started flying around the internet, accusing him of anti-China terrorist activity, and were picked up by Chinese state media. Increased attention from the authorities soon followed, including, ultimately, detention by the police for alleged bomb-making (something he vehemently denies).

The accusations concerned him greatly, but he didn’t think initially he’d have to leave his homeland. That changed this May, however, when the new National Security Law was announced by China. Under the new measures, anyone found guilty of subversion, sedition, terrorism or foreign collusion could be imprisoned for life – the crackdown the protesters long feared had finally arrived. Hundreds of activists, journalists and lawmakers have already been arrested under its widely-interpreted terms after it was passed at the end of June, and Timothy no longer felt safe, fearing extradition to the mainland, where he “can’t trust the legal system”.

Nor is it just Hong Kongers who are worried. The law has been condemned by governments and human rights groups across the world. The US has revoked the territory’s special status, including removing the trading and travel privileges it enjoyed over mainland China. In the UK, the government has denounced the law as a breach of its 1997 handover pact with China.

Britain has also extended the length of time, from six months to five years, that British National Overseas (BNO) passport-holders from Hong Kong can live and work visa-free in the UK. After that point, the three million BNOs should be able to seek settled status, followed by citizenship.

Yet the process of seeking refuge in the UK is still far from straightforward. While high-profile individuals, such as activist Nathan Law or former British consulate worker Simon Cheng, can perhaps expect to claim asylum with relative ease, the less visible Timothys of the movement face a harder task.

Having been born in Hong Kong before its handover from Britain to China in 1997, Timothy could have qualified for a BNO passport (including the new, upgraded visa-status that will become active in January). But his parents never registered him, not expecting that he’d have any reason to flee. This, he says, means he must now pursue the asylum route instead and take his chances. He cannot even acquire an Application Registration card – which would allow him to learn how to drive, get a credit card, and learn English for free – because his report centre is apparently closed due to Covid-19.

Now safe in a home in southern England, Timothy is doing everything he can to give himself the chance of a future without fear. But that doesn’t mean he is free from nightmares.

The night he stayed on my sofa, he woke me from the next room with screams in his sleep. Was it concern over what might happen if he is forced to return to Hong Kong, I wondered? Or all the countless unknowns that lie ahead if he stays in the UK?

He had no recollection of any such discomfort when I enquired the following morning – and has since seemed to be making the most of his situation; visiting the football stadiums he’s loved his whole life and meeting up with others who’ve also fled Hong Kong. Yet I cannot believe his hidden night-time fears and uncertainties have gone away entirely.

They certainly have not for me. I may feel good for having offered someone in need a place to stay for the night. But I am also riddled with doubts about whether I could or should do more; about what will happen to him and countless others like him, not just from Hong Kong but countries across the world; and about the way I put faith in my government to worry about and take care of these things for me – but that it seems so reluctant to do so.

I knew, when I waved goodbye at the doorstep, that the thread of new connection was made up of little more than broken snippets of the English language and a common faith in human goodness. And I knew it was soon likely to be stretched entirely away again; transferred into the hands of unknown bureaucrats.

But I was also grateful that it had briefly existed, however thin and flawed; that I’d said “yes”; and that my home and this country had, at least for one night, been a place of welcome at a time when so much feels dangerously unstable.

“Thx for take care me in the first day I arrive to UK [laughing-sideways emoji],” he has texted since. “My pleasure,” I replied.