The origins of what has come to be adopted as the US’s national landscape painting lie not in natural beauty but in wounded pride. In 1829 Captain Basil Hall, an English traveller and veteran of the Napoleonic Wars, published Travels in North America in the Years 1827 and 1828. The snooty observations it contained – on American life, manners, government and topography – caused a transatlantic furore. Hall’s disobliging comments about the young nation included the suggestions that Americans were spittoon-using parvenus obsessed with money, and that not only were they rough around the edges but their political and cultural institutions were inferior to those of Europe. To add insult to injury, someone who hosted Captain Hall and his wife during their trip recalled that Mrs Hall also “indulged herself in certain criticisms upon the American ladies”.

Those Americans were not a people subject to the cultural cringe or willing to be patronised by a scion of the Old World, and Hall’s book prompted numerous outraged responses in the press and even in books: the sense of hurt continued to sting for a decade. One of Hall’s criticisms, however, bore fruit. “Where the fine arts are not steadily cultivated,” he had observed, “there cannot possibly be much hearty  admiration of the beauties of nature.” This affront to American sensibility was seen as a challenge and one painter in particular took it up.

Ironically, the artist was English-born. Thomas Cole (1801-48) came from Lancashire and moved to the US with his family in 1818. As a naturalised citizen he was instrumental in founding the Hudson River School, a group of landscape painters who took the river valley and its scenes – boatmen and hunters, waterfalls and weather – as their theme, and who formed the nation’s first indigenous school of repute.

In 1836 Cole published his “Essay on American Scenery”, which was, in part, a riposte to Hall. In it he lauded his adopted land, pointing out that its landscapes offered not just the sublime but also the picturesque and the beautiful – three themes that had been an important part of artistic discourse in Europe since the mid-18th century. What’s more, he said, American landscapes were all the better for not being burdened by associations with ancient civilisations. “You see no ruined tower to tell of outrage,” he wrote, “no gorgeous temple to speak of ostentation; but freedom’s offspring – peace, security and happiness dwell there, the spirits of the scene.” As he hit his stride his prose turned bright purple: “And in looking over the yet uncultivated scene, the mind’s eye may see far into futurity – mighty deeds shall be done in the now pathless wilderness; and poets yet unborn shall sanctify the soil.” One in the eye for the Old World. 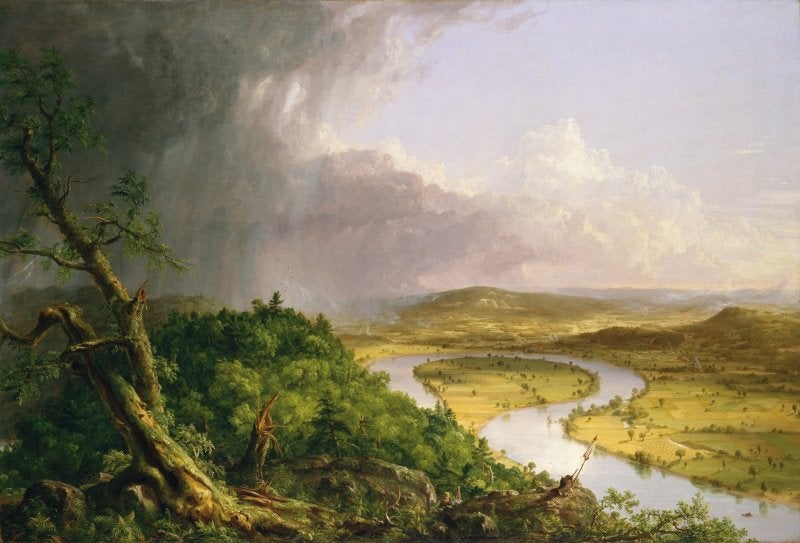 Lands of innocence and experience: The Oxbow, painted by Thomas Cole in 1836

That same year Cole gave a painted rejoinder to Hall too, ponderously titled View from Mount Holyoke, Northampton, Massachusetts, after a Thunderstorm, but better known as The Oxbow, and now in the Met in New York City. Mount Holyoke was a popular 19th-century tourist destination, some  145km west of Boston, overlooking the Connecticut river, that offered long-reaching views of the New England landscape (even Hall admired its vistas, despite the ginger-beer seller and fake hermit who could be found at the peak). Cole, however, treated it as both a literal and an allegorical place.

He came to the painting in the middle of working on his epic Course of Empire series, which showed the rise, peak and fall of a classical civilisation. His patron, the dry goods plutocrat Luman Reed, saw that work on the five paintings was wearing Cole down and suggested he try something else. Indeed, Cole had previously confessed in his diary that “my mind has been occupied with so many cares & anxieties, sickness of my Mother & Father etc, & so many interruptions that it has not been in proper tone for pursuing my profession”. He felt he was being sidelined by younger painters and that “my best days are passing away without being able to apply talents I possess so entirely to my art as I should wish”.

Cole had made sketches of the view in 1833 and for his painting he conflated a broader panorama and then, on a canvas nearly six feet wide, divided it diagonally in two. In one portion he showed wild nature – a storm tail passing overhead, leaving broken tree trunks and twisted foliage in its wake. In the other portion, beyond the glistening oxbow bend of the river, he showed an American Arcadia, all neatly tended fields, careful husbandry, peace and prosperity. Here is the futurity he spoke of and here, too, the idea of “manifest destiny” made real: Americans could and should tame the wilderness and shepherd it to civilisation.

Cole himself perhaps felt some ambiguity about the relentless recasting of the American landscape. The hill in the background bears logging scars that form the shapes of Hebrew words: one reads “Noah”, the other “Shaddai” – the Almighty. What is not altogether clear in this Eden is whether God is looking down approvingly on man’s work. There may be a boat and a barge on the river and farms on the plain, but there is only one human to be seen; it is a self- portrait of Cole at his easel, almost lost in the foreground undergrowth, as he fixes this moment of national transition in paint.

Cole has painted a series of contrasts: past and future, wild and temperate, innocence and experience, the sublime and the beautiful. There is a sense, too, that he knew how precariously balanced all these  elements were. In his Course of Empire paintings he showed what fate had in store for an overreaching civilisation.

The painting met with great acclaim when it was exhibited and he pocketed a very welcome $500 for his trouble. What it proved, however, was that American artists could depict their own land in ways unbeholden to the European tradition. Intriguingly, X-rays reveal that beneath the paint of The Oxbow lies the outline of a quite different picture, one containing ranks of classical buildings. In making a distinctively American art, Cole quite literally overpainted all traces of the Old World. Basil Hall, meanwhile, suffered mental illness in later life and was confined to an asylum in Plymouth, dying eight years after The Oxbow appeared.