Very little is known about Albrecht Altdorfer (1480-1538), the painter of St George and the Dragon, a small and deeply enigmatic picture dating from 1510. The sparse biographical information available shows that he came from Regensburg, a city on the Danube in Bavaria, and was tied to its government and institutions for most of his adult life. However, he left no letter or treatise containing anything of his thoughts on art. His paintings, drawings and etchings are rare and his patrons largely unknown. Nor is there much evidence of how his strange pictures – almost all exterior scenes, some with biblical subjects, some pagan, and some altogether empty of people – were judged by his contemporaries. This historical silence is frustrating, not least because he was the first Western artist since antiquity to paint independent landscapes.

Altdorfer probably trained as a painter with his father, a minor artist, before becoming a manuscript illustrator. Landscapes had long appeared in the backgrounds of subject pictures, such as paintings of the Virgin and Child, where they showed the difference between the heavenly and earthly realms. They appeared more frequently, however, as marginalia in the illuminated books of the Middle Ages, where draughtsmen could let their imaginations off the leash. Altdorfer’s familiarity with this old tradition is given credence by the tiny size of the St George – it is just 11 inches high – as well as its miniaturist technique and that it is painted on parchment stuck on board.

Among his older contemporaries, both Leonardo da Vinci and Albrecht Dürer made detailed studies from nature; Da Vinci as a way of understanding the interconnectedness of the world and Dürer (whose work Altdorfer certainly knew, and possibly the man too) as a way of understanding art. For Dürer, “art is embedded in nature and he who can extract it, has it”. Altdorfer’s landscapes, full of mountains and cliffs, colour-saturated and cloud-filled skies, roads and bridges, castles and churches, and always trees, don’t fit either credo. Rarely topographical, they are views of the imagination fashioned from stylised details. 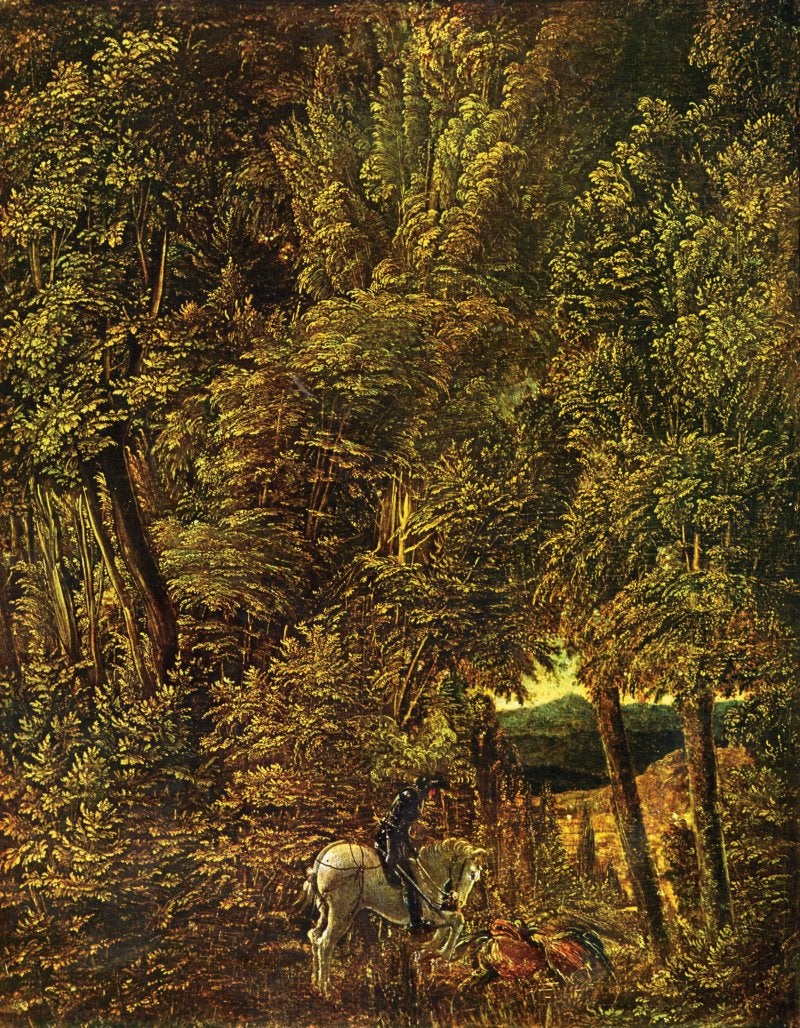 Perhaps his most famous painting is The Battle of Alexander at Issus of 1528. It was made for William IV, Duke of Bavaria and the commission was so important Altdorfer turned down the mayorship of Regensburg in order to work on it. The picture gives a bird’s-eye view of a melee in which hundreds of tiny figures battle it out by a craggy coastline under an apocalyptic sky. During the Napoleonic Wars it was taken by French troops and hung in the Emperor’s bathroom, and when the poet and philosopher Friedrich Schlegel saw it in Paris in 1804 he asked: “Should I call it a landscape, or a historical painting, or a battle piece?” The same can be asked of the St George.

This ambiguity is sometimes reflected in the title the picture is given: it is often referred to as Forest Scene with St George or Countryside with St George. It is unsurprising since the saint and his adversary – a composite winged, toad creature – are almost incidental, just three inches high and comprehensively overwhelmed by an extraordinary explosion of foliage. The real battle in the painting is for space: St George is being muscled out of his most heroic moment by a profusion of leaves. Indeed, the only thing constraining the trees is the picture frame itself.

Forest scenes were a favourite topic for Altdorfer – he made drawings showing a satyr family, a wild family, and witches all set in woods, but in none are the trees as manic as here. For the painter, and for the humanists and poets who are thought to have been his audience, these sinisterly bosky scenes touched something in the psyche. Germany’s forests, a realm of myth and legend, occupied a blood and soil place in the Teutonic imagination. Unimaginably old, they had swallowed the legions of the Roman general Varus in AD 9 and were the home of dark deeds, both human and supernatural.

In St George the forest has stopped being a setting and has become the subject. Altdorfer lost himself in pattern making, drawing the boughs with a calligraphic flourish that is more Chinese than European. The flickering greenery verges on the abstract and Altdorfer gives that brief glimpse of a distant horizon to try to tame this sprouting mass with a sense of reality.

Perhaps Altdorfer crammed so much into the picture because the rest of his life was filled with civic duties. He served on Regensburg’s city council for more than 20 years and became the city’s superintendent of architecture, while also managing the operation of a local religious cult devoted to the Virgin. His duties left him respected and rich, the owner of several houses and vineyards – he left an inventory 20 pages long.

When he died he was buried in the cloister of Regensburg’s Augustinian church, and during excavations in 1840 a fragment of his tomb was found. The partial inscription on it reads: “Honourable and wise Herr Albrecht Altdorfer, architect.” A kinder fate would have left a fragment recalling: “Honourable and wise Herr Albrecht Altdorfer, father of landscape painting.”

This article appears in the 06 May 2020 issue of the New Statesman, Remaking Britain