Alan Reynolds, the painter of this picture, Legend in August, was in fact two completely different artists. During the 1950s he was a pastoralist belonging firmly in the English landscape tradition; from around 1960 on he was an uncompromising abstract artist firmly in the European modernist tradition. It was as if he had gone to bed as Samuel Palmer and woken up as Piet Mondrian.

Reynolds (1926-2014) is now a largely forgotten figure, indeed he suffered the protracted indignity of watching himself being overtaken by obscurity for most of his working life. In the 1950s, however, he was one of Britain’s most innovative and exciting young painters, feted by galleries and by patrons eager to buy his striking watercolours and his less frequent oils. He was seen as an artist who was taking landscape painting in a new direction. By marrying the familiar bucolic with rigorous design and pared-down and simplified shapes, he was crafting a modern idiom for an ancient and much-loved genre and keeping it comprehensible but not entirely comfortable.

Reynolds had appeared seemingly out of nowhere. In 1952, as an unknown art student still at the Royal College of Art, he held his first one-man show at the Redfern, one of London’s more prestigious contemporary galleries. This sudden emergence was all the more surprising in that he was neither a metropolitan nor an outlandish figure such as Francis Bacon or Lucian Freud, but a countryman whose father worked as a stable hand at a Newmarket stud farm. What’s more, Reynolds left school at 14 and soon joined the army where, as an infantryman in the Suffolk Regiment, he saw active service. But it was when he was posted to Hanover at the war’s end that he first encountered European modern art and Paul Klee in particular.

This Continental influence took time to emerge. For the critics of the 1950s, Reynolds’ landscapes made him a late neo-romantic, putting him among a group of older artists – including Paul Nash, Graham Sutherland, John Craxton and sometimes Henry Moore – who were inspired by the emotional and mystical vision of nature perfected by Samuel Palmer in the early 19th century. There are affinities; like them Reynolds was not interested in topography or conventional vistas, but unlike them he had an almost obsessive concern with the structure of nature in a way that was much closer to the work of Cézanne. He didn’t go for dramatic landscapes but concentrated instead on small, intimate works that took as their starting point the undemonstrative scenery of Suffolk and Kent. As with Legend in August (from the mid-1950s and in a private collection) he filled them with strong plant silhouettes – reeds, teasels and thistles – and sometimes buildings (as here, half hidden in the middle ground), but almost never people. 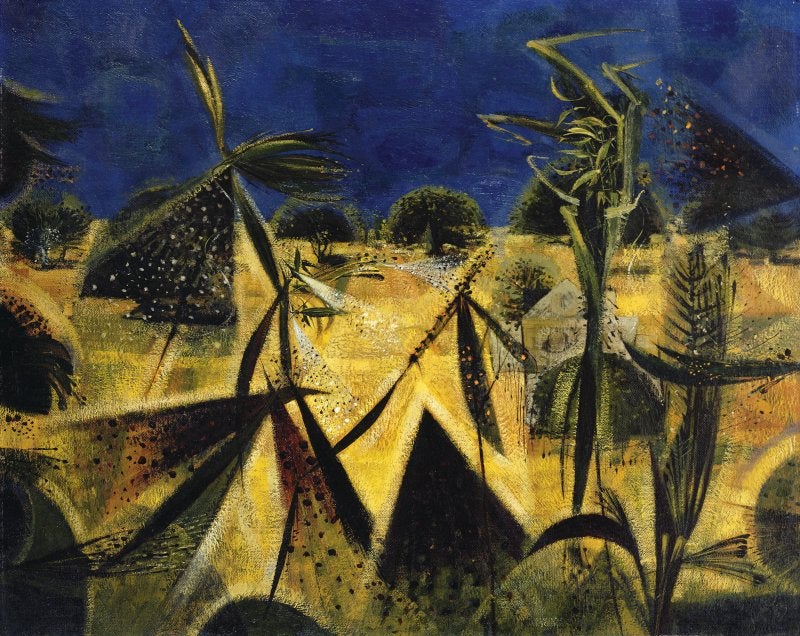 This fixation with design harks back to calligraphic Chinese and Japanese landscape paintings, as does his preference for watercolour and a restricted, low-toned palette: the Quink-blue sky here is unusual for him. Even at their most fecund, however, his landscapes nevertheless contain all the elements that were later to fascinate him. Legend in August may be a sun-soaked cornfield fringed with hedgerow weeds but it also shows the germination of his minimalism, formalism and abstraction. Even the title has a non-specific, catch-all air to it. It is not just this painting; most of his works of the 1950s are similar, as he moved compositional elements around to make the world fit the way he wanted it to. As early as 1953 Reynolds described his art as “a problem of solving equations” – not exactly a wafty “hello trees, hello sky” approach. By the end of the decade these rearrangements had become a bit much for him and, fearing he was simply repeating himself, he destroyed a large number of works. As he put it decades later: “I was after something else. I had something ticking away inside me.”

Reynolds was not the first British artist to turn from figurative work to abstraction. Ben Nicholson had made the leap in the early 1930s, inspired by visits to Paris and the studios of Hans Arp, Constantin Brancusi and Mondrian; Victor Pasmore did something similar in the early 1950s, though his early experiments with an American abstract expressionist manner were short-lived: “You can do about a dozen of those brush-stroke pictures,” he said, “and that’s about it.”

Reynolds did not try his hand at brush-stroke pictures but something more austere, and he found he could do any number of them. Initially his abstracts had some of the curves and earthen colours of his landscape paintings, but gradually he purified them into grids, geometrical shapes and pure white. He spent many years making only Nicholsonian white relief pictures. Nature, he had always believed, was not art in itself but, when organised, could be. So he took those beguiling plant forms and tidied them up, freezing them solid – what had been living things became geological.

Britain in the 1960s had little taste for this foreign, stripped down aesthetic and his studies in balance and equilibrium fared none too well outside dedicated modernists. In freeing his forms from the boundaries of sky and earth he had, for many critics, also lost their appeal. Reynolds insisted that his work was “still concerned with poetry and it remains influenced by nature and my surroundings – for me it could not be otherwise”, but few people were convinced.

Reynolds refused to return to his earlier manner and stayed resolutely on the path of abstraction, even if it meant he had to take up art teaching, at the Central School of Arts and Crafts, and then St Martin’s in London, for his main income. In 1982 – when Reynolds was still working, and had some 30 years to live – a piece in the Times about his latest exhibition was titled: “The abstract integrity of a painter once popular.” The assessment was cruel but true.