Like so many of the big-name artists of the US in the 20th-century, Andy Warhol was only just an American. His parents had arrived as immigrants from Austria-Hungary to settle in industrial Pittsburgh, where he was born Andrew Warhola in 1928. This newcomer’s experience was shared by, among others, Mark Rothko – Markus Rothkowitz – who came from the Russian empire; Arshile Gorky who was born in the Ottoman empire; Willem de Kooning, who arrived in the US as a stowaway on a boat from the Netherlands; and Robert Rauschenberg, whose father was German-Cherokee.

This first-generation story is the very stuff on which the nation was built; Warhol’s Americanness seemed, however, to be ordained by the fates. Just as his own appearance and art helped define the image of the late-20th-century US, so coincidence tied him to some of its key cultural-historical moments. On 4 August 1962 the exhibition of Warhol’s first Campbell’s soup can paintings at the Ferus Gallery in Los Angeles – his debut outing as a pop artist – came to the end of its resoundingly unsuccessful run: the following day Marilyn Monroe was found dead. On 3 June 1968, Valerie Solanas, a disgruntled radical feminist and Warhol acolyte, shot him three times in the stomach: the following day Bobby Kennedy was assassinated. Even in failure and trauma, Warhol kept celebrity company.

That Warhol was a celebrity artist has never been in doubt, from the moment he came to prominence in the 1960s. What has been less clear since his death in 1987 is whether he was more celebrity that artist. The art market has made up its mind: he is one of a handful of artists to have sold two works above the defining $100m-mark (Eight Elvises of 1963, which made exactly $100m in 2008, and Silver Car Crash (Double Disaster), also of 1963, which made $105m in 2013). For the past decade he has been consistently one of the two most remunerative artists by pictures sold; the other is Picasso. Meanwhile, Pittsburgh’s Andy Warhol Museum, which holds his vast archive and a hugely valuable collection of his pictures, is the largest single-artist museum in the US. 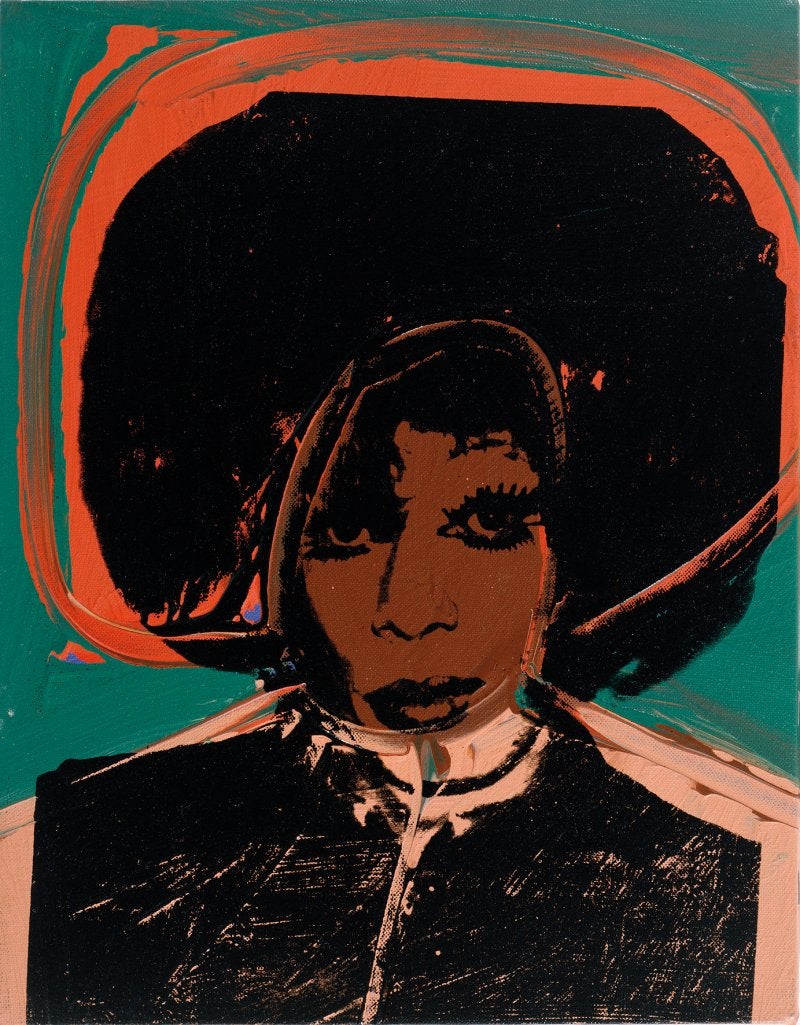 Helen/Harry Morales from the Ladies and Gentlemen series (1975)

Warhol’s commercial clout has been matched by critical validation too, not least from his latest biographer, Blake Gopnik, who, in his dauntingly detailed Warhol: A Life as Art, makes a series of extraordinary claims. Warhol, he says, has not only “overtaken Picasso as the most important and influential artist of the 20th century”, but now occupies “the top peak of Parnassus, beside Michelangelo and Rembrandt”. Such hyperbole is risible but is born from a sense of Warhol’s sheer heft as a cultural figure.

What Warhol did with his art was indeed important. Those soup cans and Brillo boxes, Coca-Cola bottles and dollar bill silkscreens of the early 1960s were, at the time, a novel response to the US’s new consumer potency. This Walmart art forced viewers to notice the commercial culture of the world around them – its advertising techniques and branding, its ubiquity, its sameness. Warhol disliked the term “pop art” and preferred “commonism”, a reference to the ordinariness of his topics.

The items he put centre stage were staples of American life. Not that the far-from-flush Warholas ate Campbell’s soups: Julia, Andy’s mother, apparently always made her own from scratch (though she did make metal flowers cut from tins and sold them to supplement her husband’s meagre income as a coal miner).

The pictures were also a response to abstract expressionism, the style of Jackson Pollock, Rothko, et al, that dominated American art. If ab-ex pictures were subjectless – all about the emotions evoked by paint and how it was applied – then Warhol put the subject matter back into art, however archly quotidian. As a teenager his art teacher noted the “childlike directness” of his work and it was a trait he never lost. The clear-eyed commercialism of his technique was of a piece too: he turned to screenprinting because it was a quick and efficient way of producing images and the more he produced, the more he could sell. 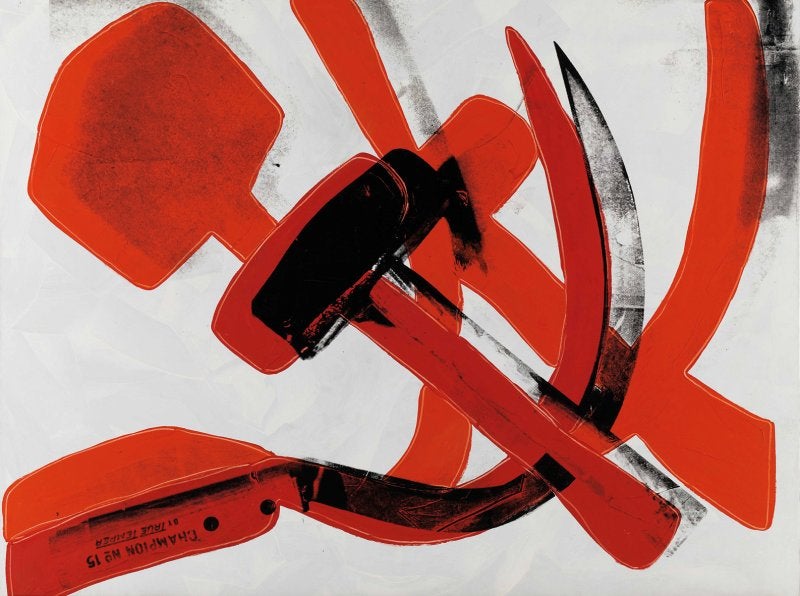 In all this, however, Warhol was not quite the pioneer his supporters have made him out to be. John Everett Millais’ Bubbles (1886) had been co-opted to sell Pears soap. Toulouse-Lautrec was experimenting with art as advertising by the late 19th century. With his urinal of 1917, Marcel Duchamp confronted a bewildered public with an everyday object that he designated as art. Roy Lichtenstein’s first experiments with the Ben Day dot commercial printing process started in 1961. And celebrity portraits are as old as art itself.

What Warhol did, however, was combine all these pre-existing strands into one historical moment. It looks unremarkable now – not least because Warhol has made it so familiar – but in the 1960s and 1970s, with its admixture of his personality cult, the Velvet Underground and the frisson of the counterculture coterie that hung about his studio-cum-club The Factory, it was revelatory. Warhols were the last word in knowing chic.

However, we now view him with the benefit of more than 30 years of hindsight and, as Tate Modern’s new retrospective brings home, it is hard to recapture the original thrill and purpose of Andy Warhol. He has become a historical figure, the compère of glamorous modernity at its brief apogee. His place and time have shrunk to a seedy-glitzy instant in New York history.

Death comes to the fore in the 1960s with a series of works either treating mortality directly – such as his multiple-image screenprints taken from news photographs of the aftermath of a road crash or a woman’s suicide, her body midair as she leaps from a tower-block window – or indirectly, in an octet of the grieving Jackie O. These pictures have the scale of medieval altarpieces de-picting the crucifixion or Mary, Mater Dolorosa, with the body of Christ. It is another coincidence that they pre-date Warhol’s own death-in-life: after the Solanas shooting he was briefly declared clinically dead. One of the most striking images in the whole exhibition is not in fact by Warhol, but a photograph of his puckered and scarred post-surgery torso taken by Richard Avedon.

One of the results of the shooting was that Warhol understandably became edgy and nervous in company – though that didn’t stop him going out as a voyeuristic observer of New York nightlife (Richard Burton likened him to “a horror film gentleman”). Another was that it put up his prices. This was no small matter to Warhol, who said that the addition of a blank black canvas alongside the car-crash screenprints was so that he could ask for more money as a result. 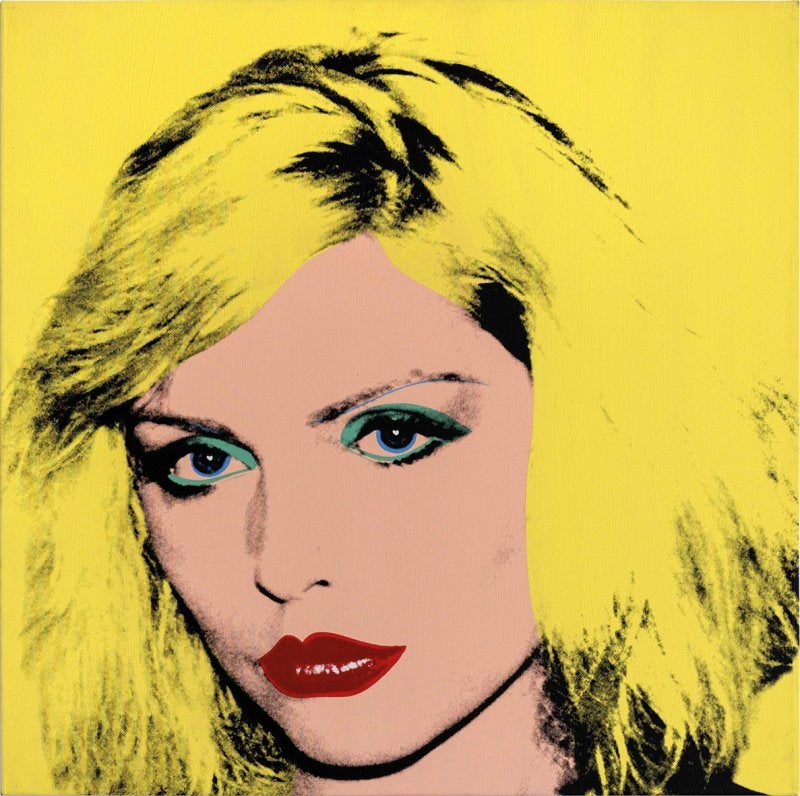 The shooting put the seal on his own celebrity too. He surrounded himself with demimondaines: the gay men, transvestites, drag queens and transgender figures he depicted in 1975 in a fascinating series of images called “Ladies and Gentlemen” (about which the Tate gets in a terrible tangle in its attempts to gender the subjects correctly, though ahistorically). But he had only to step into Studio 54 to be equally at home in a different crowd.

Warhol’s haul of fame was wide: in the exhibition Mick Jagger and Debbie Harry sit near Mao and Lenin. Alive or dead didn’t matter, nor did animate or inanimate: the Statue of Liberty, the most famous American celebrity of all, is there too; as is his reworking of Leonardo da Vinci’s Last Supper – a celebrity painting, and the hammer and sickle – a celebrity symbol. And of course there is a self-portrait in one of the spiky silver “fright wigs” he adopted after first wearing a brown toupée to cover his thinning pate (three of the wigs are shown in a vitrine, like splayed stuffed rodents).

The portraits, however, are at heart dull: there’s no technical progression in them and they’re not really portraits. They are Warhols: images of famous people (and, for the money, plenty of not-so-famous people) who keenly connived in being part of his brand, standard photographic headshots of them worked over and inked in fluorescent colours. The pictures have nothing to do with personality. There is no psychology to be discerned. They are all surface and sheen. This, of course, is partly what Warhol intended – fame as another undifferentiated American commodity – though that doesn’t make them visually rewarding. It is an irony of the exhibition that you don’t really need to see the pictures in the flesh at all. Reproductions differ only in the matter of scale. When Warhol rejected the ab-ex generation’s fascination with paint and threw in his lot with printing, he went too far. The painted surface rewards through the texture and movement of pigments, but by working in keeping with his desire that “everybody should be like a machine”, his picture surfaces are inert. By the end of the exhibition that uniform lack of tactility has palled.

So it leaves Warhol a figure of fascination: globally famous but insecure about his looks, his body, even his life; an impresario of people whose most important relationship was nevertheless with his mother, who lived with him for 20 years, always hoping he’d find a nice girl to marry. As an artist, though, now that his historical moment has passed, he stands a long, long way short of the peak of Gopnik’s Parnassus.