In May 2019 workmen started to dig up Kalandeberg square, not far from St Bavo’s  Cathedral in the Belgian city of Ghent. There was, however, no trouble with a water main or gas pipe; what the excavators were after was a missing piece of one of the world’s greatest artworks, the Ghent Altarpiece.

The altarpiece, 11ft high by 15ft wide and comprising 24 paintings, was commissioned from Hubert van Eyck in the 1420s but was largely unfinished at his death in 1426. The work was taken up by his younger brother Jan, who was, according to a now lost inscription on the frame, “second best in the art” (Hubert was “greater than anyone”).

No painting by Hubert remains to verify the claim but Jan van Eyck’s work on the altarpiece, completed in 1432, redefined art and became instantly famous. In the guise of showing the adoration of the mystic lamb, a simulacrum of Christ himself, he created a series of firsts in art: the first realistic interior, the first genuine landscape, the first proper cityscape, the first tangible nudes, the first lifelike Renaissance portraits. He took oil paint to unprecedented levels of sophistication – with glazes and transparent layers giving depth and undreamed of effects of light – to match his preternatural powers of observation. Vasari praised him; Dürer made a pilgrimage to Ghent just to see the painting.

To appreciate Van Eyck’s prowess fully it is necessary to get up close to the picture and see how he applied a miniaturist’s skill (he may have started his career as an illustrator of manuscripts) to large panels. When the altarpiece is in situ, behind glass, this is impossible to do. Since 2012, however, the picture has been undergoing a complex restoration. And while the bulk of the panels remain in the cathedral, eight of them are currently on show in “Van Eyck: An Optical Revolution” at the MSK, Ghent’s fine arts museum, alongside 12 of his other works – more than half his surviving output. It is a quite staggering and genuinely once-in-a-lifetime exhibition. 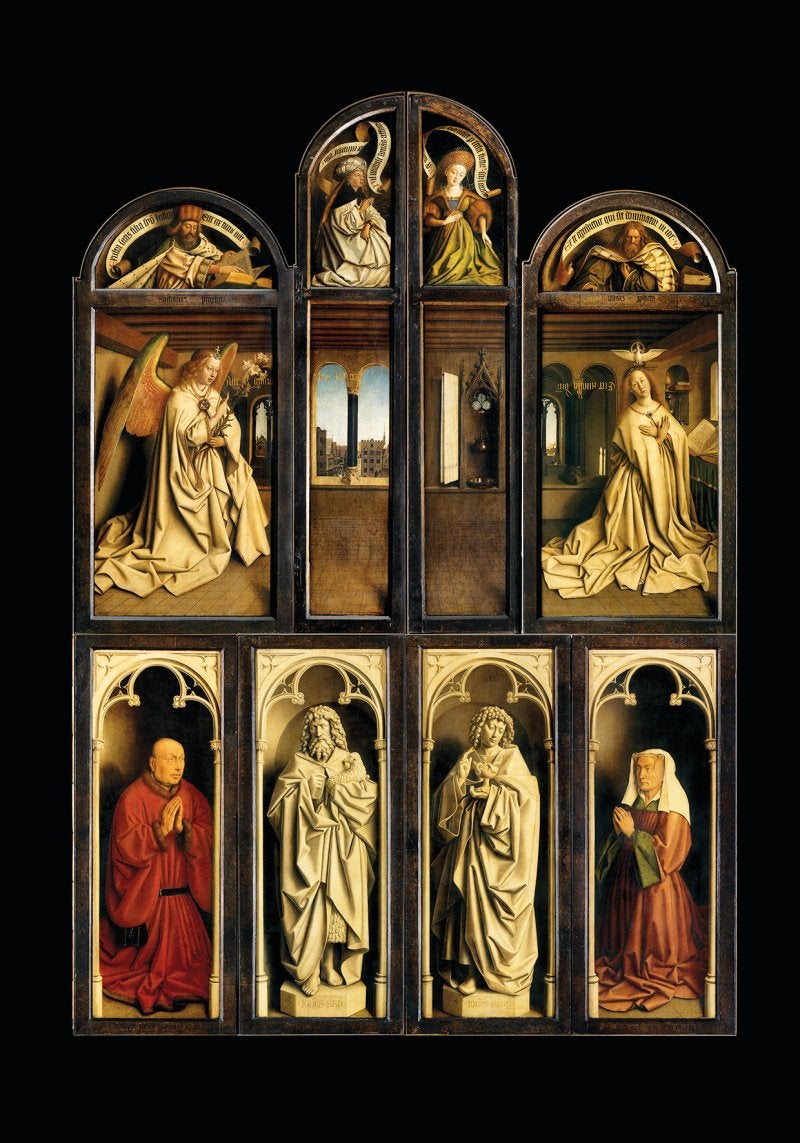 This latest restoration is far from the first time the altarpiece has been disassembled. The price for being the most famous painting in the world was that it also became the most stolen: during its long history it has been the victim of 13 different crimes. The first of its many indignities came in 1566 during Ghent’s “Great Iconoclasm”, when a Calvinist mob broke into the cathedral to destroy the picture only to find it missing: the clerics had secretly winched it panel by panel into the bell tower. When it came down again it was kept hidden in the town hall for 18 years until its return to the cathedral.

In 1781 the Holy Roman Emperor Joseph II visited Ghent and took exception to the naked depiction of Adam and Eve, who were consequently removed to spare the imperial eyes. In 1794 French revolutionary troops stole the central Mystic Lamb panel and took it to Paris, where it remained, in the Louvre, until after the battle of Waterloo. The side panels were then promptly pawned by the bankrupt diocese for the equivalent of £240 and, when they went unredeemed, were bought by an English collector, Edward Solly, for £4,000. He in turn sold them on to the King of Prussia. While in Berlin the panels were sliced in half so both sides could be shown simultaneously. Back in Ghent, the remaining panels narrowly survived a fire in 1822, though one was split from side to side.

A copy of the panel showing the Just Judges, stolen in 1934

During the First World War the altarpiece was dismantled and bricked into the walls of two Ghent houses to hide it from the Germans, who were shown a letter claiming the picture had been transported to England. In 1942, however, Hitler got his hands on it, and it ended the war hidden in the Altaussee salt mines, rigged with explosives against advancing Allied troops. Even the panels’ return to Ghent was eventful: the plane carrying them was hit by a storm of such severity that it had to make an emergency landing on a small rural airfield. Only then did they make it back to St Bavo’s.

Or rather, all but one of the panels did. The bottom left segment showing the Just Judges on one side and John the Baptist on the other was missing. It had been stolen one night in 1934 when thieves broke into the cathedral, bundled out the picture and left a note saying “Taken from Germany by the Treaty of Versailles”, a reference to the restoration of artworks as part of the postwar settlement. A witness, coincidentally busy robbing a nearby cheese shop at the time, saw two men carrying it off under a sheet. The thieves then sawed the panel in half, depositing John the Baptist in the left- luggage department of Ghent station as a sign of good faith while seeking a ransom of one million Belgian francs for the Just Judges side of the panel (which supposedly contains a Van Eyck self portrait). 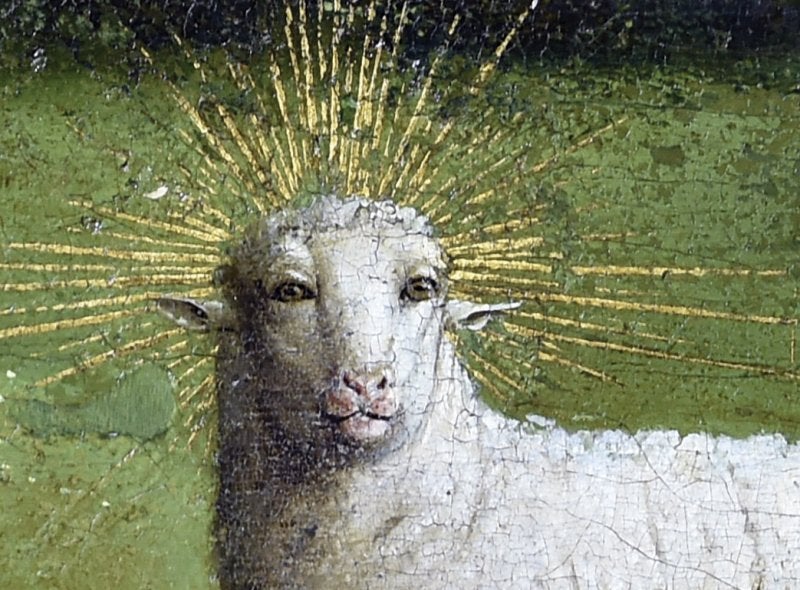 A post-restoration detail of the face of the mystic lamb, which has revealed humanoid features to stress that Van Eyck meant the lamb to be both symbol and Christ in one

Police inquiries focused on a stockbroker named Arsène Goedertier who was a volunteer at the cathedral, but he died before confessing (copies of the 12 ransom notes were discovered in his house plus an unsent 13th). The panel has never been found; theories as to its whereabouts have circulated ever since, including it being hidden under Kalandeberg square. When the cobbles were dug up last year, nothing was there but dirt.

Such though is the brilliance of the remaining panels, let alone the other peerless Van Eyck masterworks in the exhibition, that it almost doesn’t matter. Almost.

“Van Eyck: An Optical Revolution” runs at the MSK, Ghent until 30 April

This article appears in the 12 Feb 2020 issue of the New Statesman, Power without purpose