Sister Theresa Aletheia Noble likes to remind her thousands of social media followers that they are going to die.

The 36-year-old nun gets up every morning between 5 and 5:30am and heads to her convent’s chapel to meditate. After reflecting on the gospel for half an hour, she joins the 60 sisters she lives with in Morning Prayer, attends mass, and then eats breakfast. During the day, she fits in nearly two hours of personal prayer around her job in the convent’s publishing house, where she works as an editor (though the nuns in her order were initially only expected to slot in an hour of prayer, it was increased by half an hour after a sister asked for personal prayer time to be shortened).

“Got this in the mail today,” she Snapchatted on 20 December, holding up a gold coin emblazoned with a skull and the words “memento mori”. This summer, Sister Theresa purchased a ceramic skull to sit on her desk to remind her of these words, which translated from Latin roughly mean “remember that you will die”. It is a reminder her social media followers have received throughout the summer. 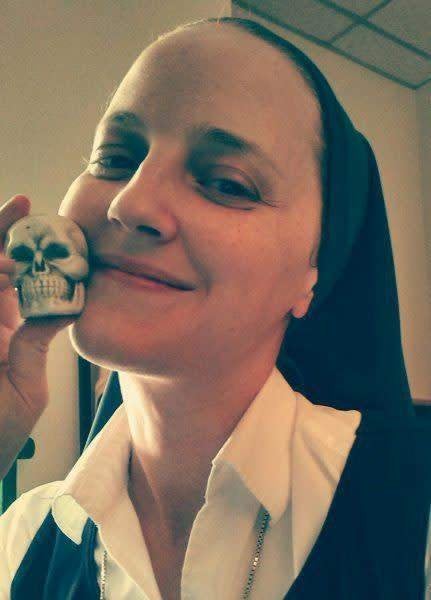 When we think of Snapchat, we tend not to think of nuns. Most behaviour on the disappearing-image app is distinctly unholy, as teenagers use the tool to flirt, gossip, and show off. Nuns are so underrepresented on the app that when it came to creating her Bitmoji (a cartoon avatar for Snapchat users), Sister Theresa struggled. There was no habit or veil, so the nun settled for a hijab.

Yet Sister Theresa is not the only Snapchatting nun. She is a Daughter of St Paul, an international group of Catholic nuns who use the media to spread the word of God (also known as #MediaNuns). “Our founder believed that if St Paul were alive today, he would be on Twitter and Facebook,” explains Sister Theresa, “because he was writing letters to churches and he was getting on boats to communicate to his flock. So if he were alive today he’d be doing the same thing.”

Sister Jennifer Tecla Hyatt  is a 45-year-old nun with a fondness for Snapchat filters. “Humour is a good medicine in life,” she says. “I wanted to give a lot of presentations to youth and I want to be able to speak their language… I like to stay connected so that I can be able to communicate better with the youth in that way.” 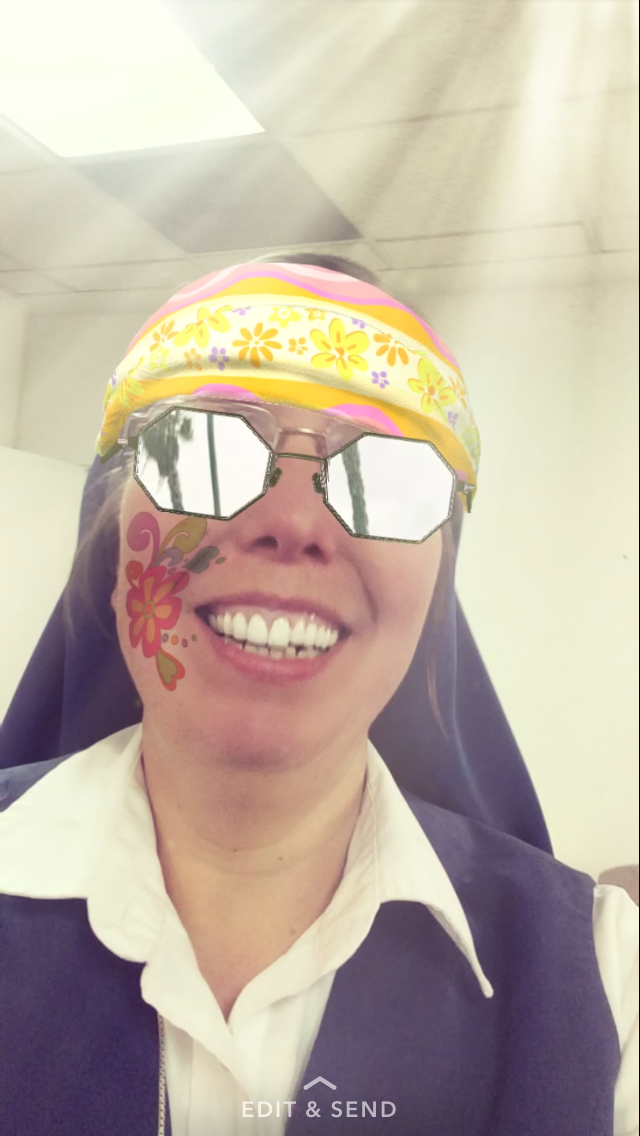 Selfies are usually condemned as vain or silly, but nuns like Sisters Theresa and Jennifer find they can help to humanise religious life. “It makes it more personable,” explains Sister Jennifer, “Although I’m still developing the skill of doing it properly, especially when it comes to taking group selfies.” 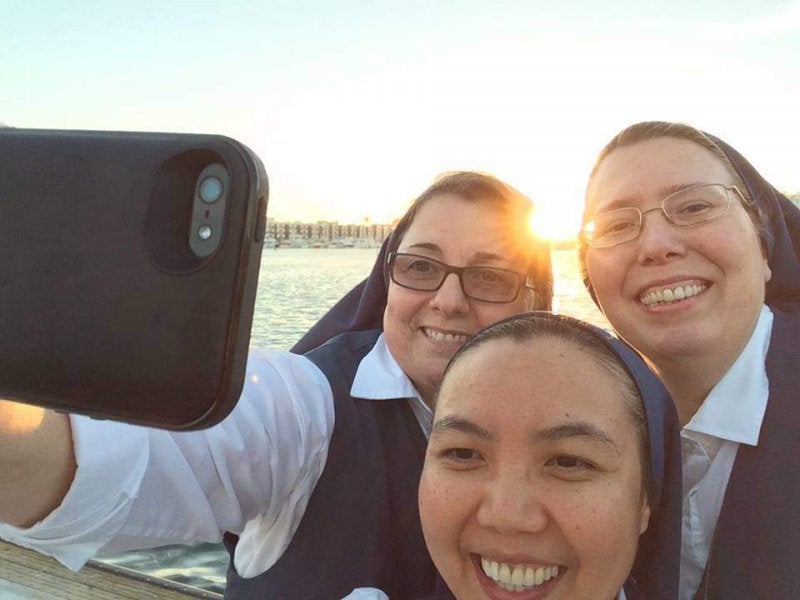 Sister Jennifer with her fellow nuns

The Daughters of St Paul don’t just use Snapchat; Sisters Theresa and Jennifer both have active Facebook, Twitter, and Instagram profiles. In August, Sister Theresa went viral on Twitter, gaining nearly 5,000 retweets and 20,000 likes. “Nunchucks are neither related to nuns, nor something you chuck,” the Merriam-Webster dictionary had written on the site. “Speak for yourself,” was Sister Theresa’s viral retort.

“Our founder said to spread the gospel using media, he didn’t just say to speak explicitly about Jesus all the time,” explains Sister Theresa. Still, she didn’t waste the opportunity. After gaining new followers thanks to the funny tweet, she typed out an important message. “Hello, new followers!” she began, “I’m 100% Catholic so chances are I will offend you soon. Jesus ♥s you.” She ended the tweet: “Remember you’re going to die. ☠”

I’m 100% Catholic so chances are I will offend you soon.

Though Sister Theresa likes to remind people of death (“it’s kind of like a call to philosophise”), what is the general purpose of a social media nun? Remarkably few Daughters of St Paul use their posts to proselytize, and many posts are simply about daily life.

“There are a lot of false ideas about cloistered nuns and one way of showing that actually we are really quite normal is being on social media,” says Sister Catherine Wybourne, a 63-year-old Benedictine nun who has over 18,000 followers on her Twitter account @digitalnun. For Sister Catherine, the internet is a great way to speak with distressed people looking for help.

“Lots of people wouldn’t walk into a church or knock on the door of presbyter or vicarage or something like that, and they certainly wouldn’t ring the front door bell of a convent or a monastery,” she says. “What we’re trying to do is to welcome people online in exactly the same way we would welcome them into a monastery itself.” On Twitter, people can approach Sister Catherine easily, and she runs a 24/7 email prayer line. “I would say we get 20 or 30 prayer requests a day,” she says. “Quite often, they’re long and complicated. People go on sometimes because they know that it’s safe, we’re not going to talk about anything to anybody.” 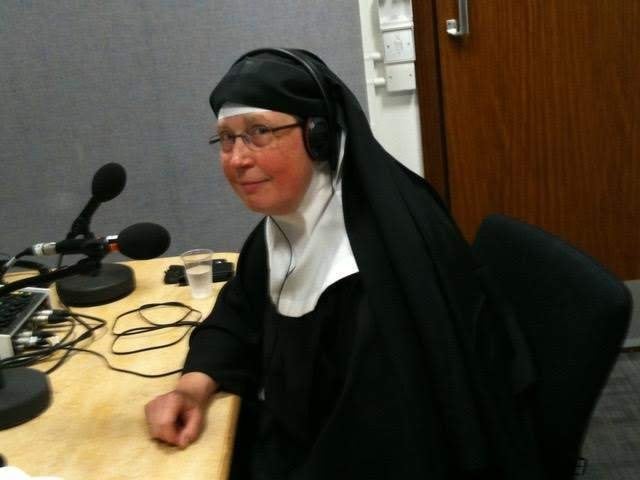 Yet even holy women aren’t immune from the internet’s dark side. Last year, Sister Catherine’s website was hacked and in the past her pictures have been stolen and edited “unsuitably”. The nun also occasionally has to block trolls. “The worst thing I find is social media has become a lot more aggressive in recent years,” she explains. “It slightly worries me that people will react to headlines or the first paragraph of something, without taking the trouble to read to the end of an article.” Receiving abuse online can be particularly difficult, she laughs, because “nuns are of course never meant to get angry”.

Sister Theresa used to cry at the negative comments she received, but she now also uses the block button when necessary. “People have very extreme reactions to me and it often has nothing to do with me, it’s what I represent.”

In July 2016, Pope Francis announced that nuns should tweet less. “Even with our mission, social media and the internet can be a time-sucker, it can just be a way to waste time,” concedes Sister Theresa, who is careful to ensure her posts stay on track. Still, Sisters Theresa, Jennifer, and Catherine believe there is value in posts that might outwardly seem frivolous – which explains Brother Duncan.

Brother Duncan is a dead dog who dictates his memoirs to Twitter from the safe confines of heaven. “He tweets from beyond the grave,” Sister Catherine laughs, explaining that Duncan was the monastery’s dog who has now been succeeded by Brother Dyfrig.

A Tweet from Beyond: Today is the first anniversary of my entry into Beyond. :) #superdog

Recently Brother Dyfrig – a Basset Fauve de Bretagne – managed to steal a milk jug off the table while the nuns were busy in the library, a crime he went on to share on social media. “I was just looking at the dog one day and thinking if you could only speak what could you say to me?” explains Sister Catherine, of the social media accounts. 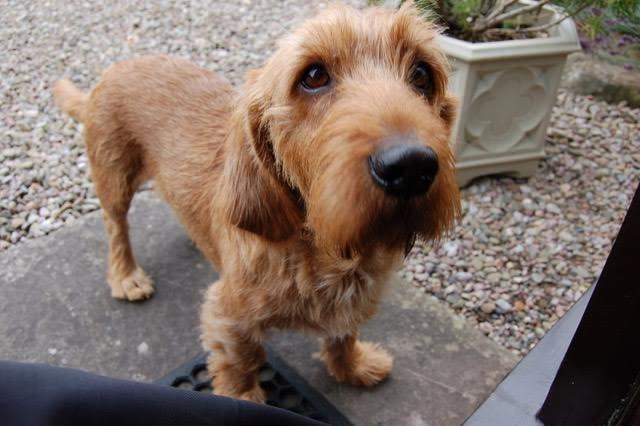 It is this type of fun that most social media nuns believe is imperative to their job (“they just remind people that we are human beings in the habit” says Sister Catherine). But what is immediately striking to a new social media follower isn’t how fun these nuns are. What is most unusual is how genuine they act online.

Sister Jennifer, the Snapchat filter-loving nun, admits that she was a “party animal” in her youth before she took her vows. When her old friends began to call her a “Jesus freak”, she says she asked God to help her explain religion to others. “I was drawn particularly to [the Daughters of St Paul] because we use the media to evangelise. St Paul was all about meeting the people where they are, and using the most effective means.”

In the past, Sister Jennifer took to creating Snapchat stories of her daily religious reflections. “When I was doing that, I noticed that I was getting more views each day. There are people out there thirsting for that. Snapchat is all about sharing the moment… so people stop and ponder in that way.” She explains that in the past, older nuns used to do “propaganda”, which meant knocking on peoples doors and talking to them, leaving behind bookmarks emblazoned with spiritual words. “This is what social media is now,” she says. 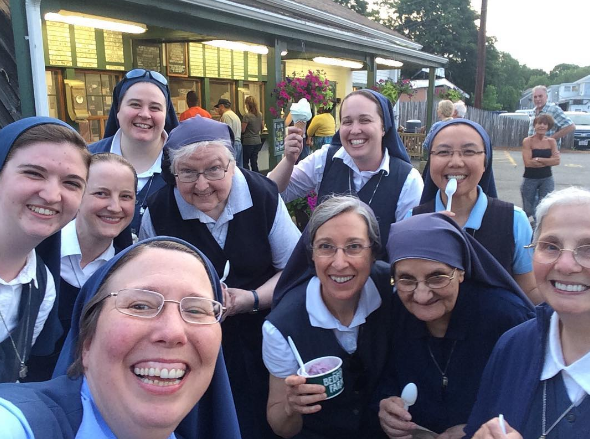 Sister Jennifer and her fellow nuns

When I ask Sister Theresa if she ever worries about seeming like a try-hard attempting to get “down with the kids” online, she is confused. It is easy to see how social media nuns could act like the cringiest brands, using the latest hashtags and slang to relate to teenagers and attempt to lure them towards religious life. But media nuns aren’t like this at all. “I think our sisters are just real,” Sister Theresa explains. “There’s very little facade in what we’re doing, or ulterior motives or anything like that. We’re just being real about our faiths and sharing it in a real way.” It is a technique that seems to work, as media nuns now have hundreds of thousands of followers between them.

“I think genuine honesty really resonates with young people,” she adds. “On social media there can be a lot of fakeness, a lot of masks, so I think people respond well to people just being themselves.”