WASHINGTON DC – Foreign policy was not a top issue for voters during the midterm elections on Tuesday (8 November), which were instead dominated by concerns about rising inflation, abortion rights, education and even the future of US democracy. Yet the outcome could have significant consequences for American policy on critical global issues, including long-term military and economic support for Ukraine.

The results at the time of writing suggest that while the night was not as disastrous for the Democrats as some had predicted, the Republicans are on course to take back the House, meaning at least two years of divided government and a chamber that is bitterly opposed to President Joe Biden’s agenda. Kevin McCarthy, the House Republican leader, has already warned that if his party wins there will not be a “blank cheque” for Ukraine. “I think people are gonna be sitting in a recession and they’re not going to write a blank cheque to Ukraine,” McCarthy said on 18 October. “They just won’t do it.”

At the time, other senior Republicans were quick to walk back his comments. Mike McCaul and Mike Rogers, who are likely to chair the new House foreign affairs and armed services committees in a Republican-controlled house, have insisted that there is strong bipartisan will to maintain the current level of support for Ukraine. The Senate Republican leader, Mitch McConnell, said that Ukraine should be given even greater assistance, claiming that McCarthy’s words had been taken out of context and that he was simply calling for more scrutiny of the aid packages.

However, there is growing scepticism on the far-right wing of the party about the importance of supporting Ukraine. “Under Republicans, not another penny will go to Ukraine,” promised the Republican congresswoman Marjorie Taylor Greene during a campaign rally. “Our country comes first.” She was re-elected on Tuesday. Fox News anchor Tucker Carlson, who hosts the country’s most-watched cable news show, has repeatedly questioned the US approach to the war and denigrated Volodymyr Zelensky’s government. JD Vance, the Hillbilly Elegy author who won the senate race in Ohio in the midterms, has previously called for the US to cut off aid for Ukraine. 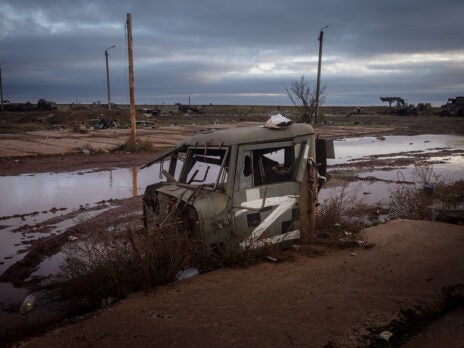 The re-emergence of Donald Trump, who held a series of rallies ahead of the midterms and could announce his 2024 presidential run next week (he has teased a “very big announcement” for 15 November), will only fuel calls for an “America first” approach to foreign policy and could jeopardise long-term support for Ukraine. It was Trump, after all, who delayed almost $400m in military aid to Ukraine in 2019, resulting in his first impeachment.

Then there are the endless investigations that we can expect the new Republican-controlled House to hold over the next two years, and the brinkmanship over the federal debt ceiling. None of this means that support for Ukraine will be cut in the near term. In fact, Democrats are likely to rush through additional funding in the coming months while they still have control of both Houses of Congress. But the longer-term prospects are more uncertain. A divided and increasingly polarised America that is turning inwards will be less able to focus on critical foreign policy challenges. That should worry Ukraine’s supporters, and other countries who depend on US security guarantees too.

[See also: How will the Ukraine war end?]