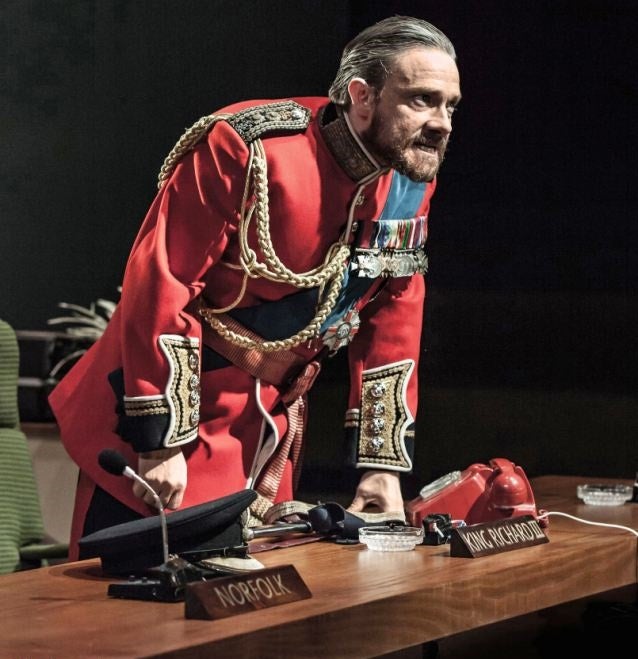 Martin Freeman has just started his three-month run as Shakespeare’s Richard III on the West End. So new is the show that the reviews for what happens on the stage aren’t even in yet, although the verdict on the audience has already been pronounced. “Martin Freeman fans ‘ruin’ Richard III”, says the Telegraph, while the Mail wonders: “Are overexcited Hobbit fans ruining Martin Freeman’s Richard III for Shakespeare purists?”. The crime? Clapping and cheering during Freeman’s first scene, in a flagrant breach of “theatre etiquette”.

All the reports quote theatre blogger Claire Dikecoglu, who at the bottom of her review of the production defended her decision not to participate in a standing ovation, saying that she felt “irritated at the audience when one or two interrupted the flow of the play early on to clap and cheer after Martin’s first scene”. It’s her personal opinion – she was the one actually in the audience, after all – but that one line has been appropriated to bolster the argument that “real” or “seasoned” theatregoers are having their experience ruined by young upstarts who don’t know the rules, and that this is a terrible travesty. It’s clap-shaming, pure and simple – trying to make people feel bad and unwelcome for expressing their enthusiasm at a performance that they have paid to see, just like anybody else – and it has to stop.

Let’s look at this notion of “theatre etiquette”. There is no such thing: there’s no Debrett’s for theatregoers. The idea that theatre is best enjoyed in total darkness and absolute silence is a relatively recent one – back when Richard III was first performed, Shakespeare’s audiences heckled the actors and one another, had fights, consumed food and drink, and generally had a rowdy good time. Even in the late nineteenth century, when plays by Oscar Wilde were being premiered in London, opening nights in particular were where society luminaries came to exchange gossip and elicit scandal, and where the hoi polloi came to laugh uproariously in the pit. Wilde even showed appreciation for his vocal audience in a speech after the first night of Lady Windermere’s Fan, saying:

I congratulate you on the great success of your performance, which persuades me that you think almost as highly of the play as I do myself.”

Today, at a time when wages are squeezed and most people aren’t feeling particularly flush, theatre audiences are still growing. Attendance figures (pdf) for the main London theatres in 2013 were up by 4 per cent on the previous year. The Society of London Theatre, which compiles the data, attributed this in part to the number of big names who appeared on the West End last year:

The star-studded Michael Grandage Company Season pulled in the crowds at the Noël Coward, Helen Mirren proved a big draw playing the Queen in The Audience at the Gielgud, and Adrian Lester’s Othello vied with Rory Kinnear’s Iago in front of packed houses at the National Theatre.”

It’s a very simple strategy: if you can cast someone with a pre-existing fanbase from film or TV work in a play, the potential audience for your play increases. We see this over and over again nowadays, particularly with Shakespeare. As my colleague Helen Lewis noted last year, “doing a Shakespeare” has become something of a rite of passage for a certain type of male actor:

This new “golden age” of Shakespeare is also a golden age of thirty­something and early fortysomething actors “doing a hero” alongside their more commercial work, in a kind of mid-career seriousness test.

Last year we had David Tennant as Richard II, Jude Law as Henry V, and Tom Hiddleston as Coriolanus. Now it’s the turn of the Sherlock boys: Freeman is currently Richard III, and next year those of us lucky enough to score tickets will be treated to Benedict Cumberbatch’s Hamlet. It’s part of a mutually beneficial arrangement: the actors get to remind us that they are serious thesps, and the producers get big audiences, some of whom are already pre-disposed to adore whatever their hero does.

For better or worse, it’s a brilliantly successful model. And as well as funding productions, it’s helping theatres to appeal to those who wouldn’t otherwise be bothered by yet another production of Henry V: young people. Ticketmaster’s annual “State of Play” report (pdf) found that the 16-19 age group are more likely to attend the theatre than any other group, although people 25-44 still make up the majority of audiences. If, as I strongly suspect, what is meant by “theatre etiquette” is actually “what we, the rich people who can afford to go to the theatre regularly, have always done”, then that’s changing too. Dressing casually is now considered acceptable by a majority of theatregoers, and a substantial portion of those surveyed admitted to whispering, “laughing when not intended” and checking their phones. All of this is good – people are having fun and providing more money to spend on exciting productions. As playwright and screenwriter Christopher Hampton told the Evening Standard:

Attracting first-time theatregoers is the holy grail as far as we are all concerned. We want them to come as much as possible.

“I am all for people having a good time in the theatre and if they want to express themselves like that, I don’t see any harm in it.”

The biggest barrier to going to the theatre is still the cost. To become a “seasoned theatregoer”, of the kind who object to the cheering and clapping, you have to be well-off, because going to the theatre regularly enough to learn its “etiquette” is a luxury that not everyone can afford. Making people feel bad for their enforced inexperience is a way of saying that you don’t think they should be there at all. It’s a way of resisting the democratisation of culture, of saying that “this is only for people like me – young, fidgety people like you aren’t welcome here”. It’s snobbery, pure and simple: assuming that someone who likes Martin Freeman for his performances as Bilbo Baggins and John Watson couldn’t possibly also appreciate his Richard III.

Of course, when we pay for tickets to see a play, it’s because we want to see it and, ideally, hear it too. Practical considerations, like silencing mobile phones and abstaining from loud arguments with family members mid-soliloquy, are there for this very good reason. This is precisely why theatres and venues provide friendly reminders before the curtain goes up. Too often, though, it’s other audience members who take it too far: a friend of mine reported an angry altercation at last year’s Proms, where he was loudly reprimanded by someone a few seats along for silently looking up something about the concert on his smartphone 20 minutes before the performance was due to start. At that point, it’s not a matter of consideration anymore – it’s become a way of policing who should and shouldn’t be allowed in the audience at all.