By happy coincidence (well, not quite – more on that later), the three big Shakespeare productions showing in London this winter all explore the same subject: leadership. At the Noël Coward Theatre, Jude Law is Henry V – dashing, with a hint of darkness; in the vast expanse of the Barbican, David Tennant is a fey, fragile Richard II; while at the tiny Donmar Warehouse, Tom Hiddleston’s Cori­olanus is too unyielding to turn from soldier to politician.

All three are fine stage actors but they are also “stars”: the A-lister, the telly favourite and the young pretender, fresh from playing Loki in the Avengers film. (It is entirely unsurprising, although still exciting, that Benedict Cumberbatch will be giving us his Hamlet in 2014.) This new “golden age” of Shakespeare is also a golden age of thirty­something and early fortysomething actors “doing a hero” alongside their more commercial work, in a kind of mid-career seriousness test.

Of the trio, Tennant has what seems like the most difficult job: Richard II is a fatally weak figurehead, and after John of Gaunt’s famous speech – “this precious stone set in a silver sea . . . is now leased out, I die pronouncing it, like to a tenement or pelting farm” – the audience is likely to agree with his cousin Bolingbroke that it is in the best interests of the realm for the king to go.

How do you create sympathy for a character such as this, one who would call his dying uncle “a lunatic lean-witted fool” to his face? One who responds to his offstage death with this brusqueness:

The ripest fruit first falls, and so doth he;

His time is spent, our pilgrimage must be.

So much for that. Now for our

Tennant plays this casual cruelty like a spoiled child – reminding us that being a king is very like being a toddler and it’s not good for anyone never to be told “no”.

The costume design helps, too, by creating a feeling that Richard’s character is out of place in his own time: this spoiled child lives in a world of tough men. Nigel Lindsay’s bullet-headed Bolingbroke is – like almost all the other male characters – clad in chain mail, while Tennant wafts round the stage in a series of flowing gowns, waving his long arms expressively and wearing elbow-length hair extensions that look like they were harvested from Neil in The Young Ones. 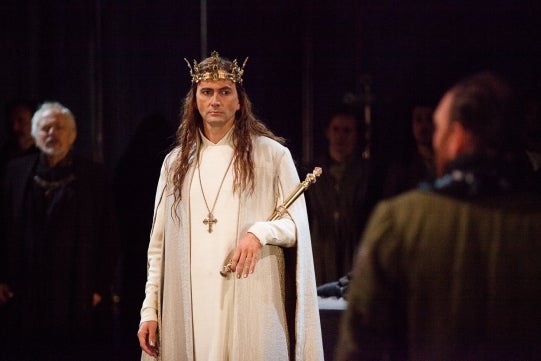 After Bolingbroke takes his crown, Richard achieves a different type of nobility in accepting his fate, and Tennant does this exquisitely. The metaphorical wobbly lip has always been his strength: from Blackpool to Doctor Who to Recovery, he’s probably made British television viewers cry more than any other actor working today.

Jude Law, by contrast, has a much more straightforward job. The roistering Prince Hal of Henry IV Parts I and II has already faded into memory, and Falstaff’s offstage death will make little sense to the 30 per cent of ticket buyers whom the director, Michael Grand­age, claims are first-timers to the theatre. (Would it be a heresy too far to suggest that the scene be shaved when the play is done as a stand-alone piece?)

There’s nothing wrong with this production: the whitewashed set is elegant, the costumes gesture to the period without looking ridiculous to modern eyes (Law’s slim-fit trousers have just a whisper of codpiece about them). The performances are uniformly well-judged, with Ron Cook’s swaggering Pistol and Jessie Buckley’s unexpectedly funny Katherine particular highlights.

And yet: it all left me strangely cold. If Tennant’s Richard II is a man out of his time, then perhaps Henry V is a man out of ours. There is no discussion about why the king, already ruler of one country, is desperate to acquire another. (Also, the French king seems like a decent sort, albeit with a striking resemblance to Top Gear’s James May.) 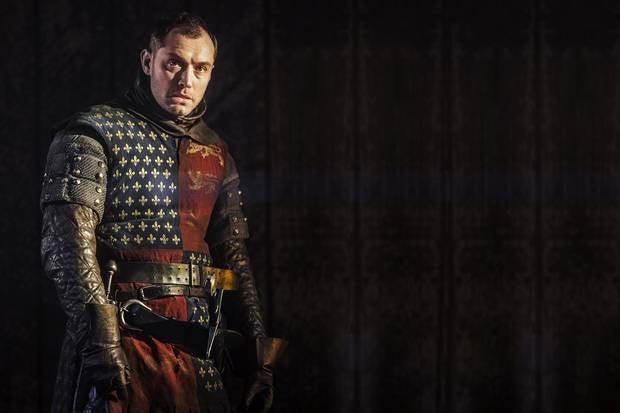 So, why is King Henry leading thousands of men to risk their lives so that he can move his tennis court a few miles closer to Paris? It’s all founded on an unquestioning patriotism that might seem quaint to an audience that remembers the invasions of Iraq and Afghanistan (or even Nicholas Hytner’s 2003 National Theatre production of the play, which referenced them explicitly). In the end, my sympathies are more with the “cowardly” Pistol and his friends, grumbling their way over to France and hoping only to do some light looting and stay out of trouble.

Tom Hiddleston’s Coriolanus prefers to be in the thick of it. Early on, he acquires his name by clambering up a ladder centre stage to storm the gates of Corioles. His soldiers mourn his noble folly in taking on a whole town on his own; midway through their eulogies, he emerges, smeared in blood and undeniably victorious. (This later allows him to take a shower on stage, causing much excited giggling from the row behind me. Your correspondent is A Serious Critic, however, and definitely did not fan herself with her programme.)

The tragedy of Caius Martius Coriolanus – and this play is a tragedy, not a history – is that the same stubborn pride that makes him a war hero prevents him from succeeding as a politician. Back in Rome, he cannot win over the plebs, nor the tribunes who represent them, and ends up cast out of the city as a traitor. So, he teams up with his old enemies, the Volsci, who agree to follow Coriolanus because their commander, Aufidius, has been having sexy dreams about him – and frankly who can blame him:

Ahem. You get the idea.

Unfortunately for Coriolanus, when he is poised at the gates of Rome, a visit from his mother, wife and son convinces him not to sack the city. The Volsci are unimpressed with this newfound softness and in an obscene echo of the shower scene, they hang him from his feet on a meat hook in the centre of the stage and slit his stomach open. He drips blood, gently twirling as rose petals fall from the ceiling. 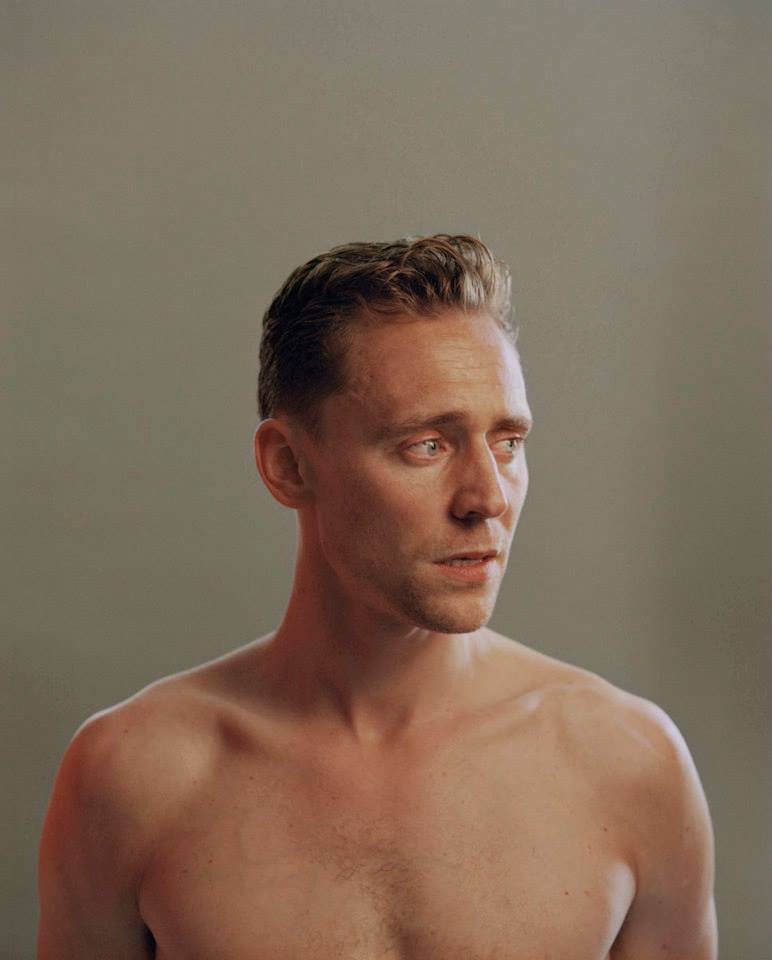 It’s my guess that very few theatregoers (even ones as luvvie-loving as the Donmar crowd, who seemed to be very excited about “the woman from Borgen” being in it) will be familiar with the story of Coriolanus, and that has the happy effect of making the play more enjoyable, not less. Forced to concentrate on the verse to follow the plot, you find that the language shines. Purists may not like all the bells and whistles, but none seemed gratuitous – except, perhaps, the endless moving of chairs around the stage, which made it feel occasionally like a polka in Ikea.

Talking of the stage, that white square should get its own credit in the programme: at various points it was smeared with graffiti, showered with fireworks, covered in blood, water and petals. Hiddleston and Hadley Fraser’s Aufidius had a sword fight that degenerated into grisly-looking hand-to-hand combat, all thumbs and windpipes. (“There was a lot of proper acting,” said my boyfriend approvingly on the way home. “They were really out of breath.”)

All three of these plays are sold out, or close to it, for their full runs; and deservedly so. We are at a lucky moment when there are actors around who can charm us as a floppy-haired Timelord or a helmet-helmed Norse god and also do justice to 16th-century verse. But if you can beg, borrow or plunder a ticket to one of these plays, let it be Coriolanus. The weak leader and the strong one are interesting in their own ways; but it is the leader who is both, each at the wrong moment, who seems the most real.