As January limps along in that endless way it does, to the point where at times the calendar seems to be going backwards (“Not the 12th again…”) it is important to do what one can to alleviate the boredom and despair. To this end I bought a thermometer the other day. “A house thermometer?” asked the man at Robert Dyas suspiciously. I refrained from sarcasm or any display of wit. “All our thermometers are on the first floor,” he said, which saddened me, as I had not planned on climbing any stairs at Robert Dyas that day, “apart from these,” and he pointed at an absolutely darling KitchenCraft® thermometer that goes from -40 degrees Celsius and Fahrenheit all the way up to 50°C and 120°F. I’m not expecting to take it to either the North Pole or Death Valley (I will – I hope – never experience such extremes), but it’s nice to know it can cope with them, in the same way that car speedometers go up to 140mph.

It tells me what I already know, but to a greater degree of precision. I have been very scared of using the heating lately, having unpaid bills and no desire to get cut off, so I have been measuring my stoicism – my inner Yorkshireman, so to speak – with a certain kind of pride. My bedroom today achieved an impressive 14°C or 57.5°F, and I like to think that makes me hard, although it took me another two hours to summon up the courage to get out of bed. One interesting side-effect – and I am using the word “interesting” very loosely indeed here – is that up until now I had become, like most people in this country, if not most people my age, perfectly acclimatised to the Celsius system. But KitchenCraft® has, as is still common practice, put the Fahrenheit alongside it, and, at a stroke, the years have fallen away and I have started thinking exclusively in Fahrenheit. Fourteen degrees Celsius? What even is that? I have also started wearing mustard-coloured trousers and wish we could have the referendum again so I could vote Brexit this time.

[See also: I start the year as I don’t mean to continue, sipping venerable condiments]

But what most impresses me about the KitchenCraft® thermometer is its price. It is a piece of white plastic a little under half a cubit long (these old-time measurements seem to come naturally now), and a thin strip of red-dyed mineral spirits in the… ah, dear Lord, you all know what a thermometer looks like. But what gets me is they charge £4.99 for it. I am not accusing Robert Dyas of an outrageous pricing system: I am looking, instead, at the people at KitchenCraft®. They are, of course, within their rights to charge whatever the market will bear, but if it costs more than 10p – or, to put it another way, two shillings – to make each one I will be somewhat surprised. Still, I love it, and like Mary’s little lamb, it follows me everywhere I go.

Reading to my son, I realise you can get away with murder in children’s books 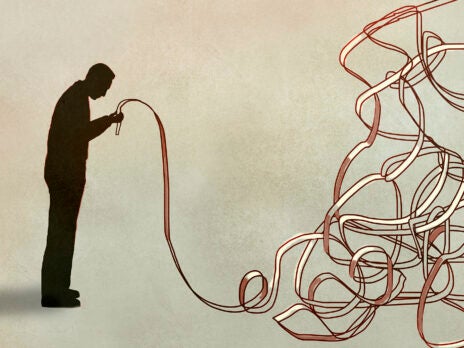 The other big change in the Hove-l is that, after a mere five months, I have a functioning kitchen window again. Did I ever mention it was broken in the first place? It basically fell out of its frame during a September gale and since then has been replaced by a rectangular piece of plywood that was never great fun in the first place, but which got more and more depressing as the months went by.

[See also: In my post-festive season loneliness, I wonder if I have gone feral]

After blocking the light and the view, which are by some margin the best things about my kitchen, the plywood made things worse and worse because it cut off all air circulation. This meant, along with the cold temperatures outside, a good deal of condensation built up whether one was cooking or not. If you did cook, the condensation got so bad the ceiling started dripping. The plywood went mouldy. So did many other things. My packet of Maldon salt reverted to a kind of slush; my pappardelle turned green. I thought about cooking it just to see what ergotism felt like but after googling the effects I decided against it. Call me old-fashioned, in imperial measurements if you will, but if I want to get off my face I think I’d rather not have gangrene too, nor psychosis.

Even my oven glove started developing a kind of fungal growth. The kitchen cupboard is now spotted with mould; as is a corner of the kitchen behind the gas hob. Knowing that this is not something for which I am responsible is a kind of comfort, but it doesn’t make it any less disgusting, and I wonder whether this is why I have been wheezy for the last month despite having more or less stopped smoking since Christmas. I can go without smoking for days on end now, and this is without using any willpower whatsoever. In fact, smoking is what involves fortitude and perseverance: I have to go down two flights of stairs to smoke, then up two flights of stairs to get back inside, and if it’s freezing or raining outside it just doesn’t seem worth the candle.

So it is all change here. I did an awful lot of tidying up before the glaziers came in. Only an eccentric would actually call the place “tidy” but it’s in better shape than it has been for a while. Onwards and upwards, and see you next week, or in a se’ennight.