When the novelist Yaa Gyasi was 15 years old, she worked as a waitress in a retirement home. Throughout her school days and during her university summers, she would serve food to the residents and more often than not their adult children, too. Over Zoom from her home in Brooklyn, New York, she tells me she had a particular fascination with these relationships, where the child cared for their parent, noticing that many seemed uncomfortable with the role reversal. “I’m interested in the idea of stepping into an expected role that you don’t necessarily want,” she says.

In Gyasi’s second novel, Transcendent Kingdom, Gifty, a 28-year-old neuroscience graduate at Stanford, is forced to look after her clinically depressed mother after she moves into Gifty’s apartment. Her mother is static and silent, turned away from Gifty at all times, confined to the apartment’s only bed. Gifty avoids her, spending long days in the university lab, dosing mice with cocaine and diet drinks to understand the brain chemistry of addiction. Gifty’s scientific career contrasts with her religious upbringing – the child of Ghanaian immigrants in Huntsville, Alabama, she was raised as a devout Christian, mostly by her mother.

Transcendent Kingdom jumps back and forth between Gifty’s present life as a scientist and caregiver, and the moments from her past that drove her towards it. It charts her parents’ move to the United States, her father’s struggle to adjust to American life and his subsequent abandonment of the family, and her youth spent at an all-white church. Her interest in studying addiction is motivated by the death of her brother, Nana, who overdosed on opioids. Trauma, for Gifty, comes at her from all angles – inflicted by her mother, her father, her brother and the prejudice of her community.

Like Gifty, Gyasi grew up in Huntsville (a racially diverse city, but a highly segregated one), but was born in Ghana and moved to the US at the age of two. She lived in Tennessee, Illinois and Ohio, before her family settled in Huntsville when she was nine. Gyasi spent most of her childhood and young adulthood trying to understand her own identity and would often imagine alternative realities: “what if we’d stayed in Ghana?”, “what if I never ended up in Huntsville?” In 2016, when her debut novel, Homegoing, was published, Gyasi wrote a piece for the New York Times asking, “What does it mean to be black in America?” 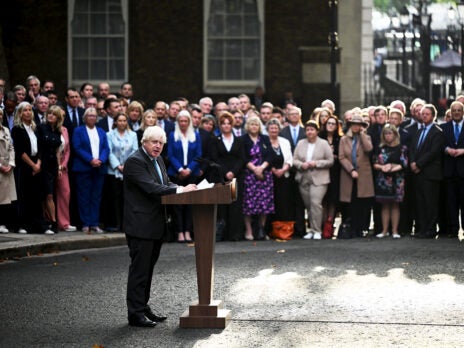 “There is no either or when it comes to identity,” she says now. “It can be multiple, and even beyond multiplicity, it can be mutable.”

Transcendent Kingdom has already enjoyed enormous success in the US (it was an immediate New York Times bestseller and featured on countless “best of 2020” lists). The structural opposite of Transcendent Kingdom, Homegoing covers 200 years of history, starting with a mother in 18th-century Ghana whose two daughters follow different paths: one is sold into slavery, the other married off to a wealthy white colonist. Each of the novel’s 14 chapters is told from a different character’s perspective on either side of this family tree.

While these are wildly different novels, similarities bind them. “I think a lot about families and inherited trauma,” Gyasi says. “Those things that ache, that are out of your control and inescapable. That constraint of only being able to handle things in ways that you can, given the childhood that you had.” Inherited trauma – handed down through successive generations – is one of Gyasi’s “obsessions” and plays a major role in each book.

[see also: “Why can I not let go of the comforts of life?” Sam Byers on what personal liberation really looks like]

Racial identity is another fundamental part of Gyasi’s writing, although it is treated with subtlety. Racism is not explicitly mentioned until the latter half of Transcendent Kingdom, but Gifty’s family’s alienation is ever present. “Gifty is isolated on so many levels,” Gyasi tells me, “The isolation of being hyper-visible without having any careful attention or affection reflected back to you.”

After the Black Lives Matter protests of summer 2020 Gyasi has been working to reframe her own anger and despair over the way black people are treated in the US. “In tandem with all the rage and the grief was a deep pride in all of the black people who continue, despite America’s continued amnesia, to make sure that we are heard and to do as much as possible to try to create a system that is fair,” she says. “And so that element of pride is one that I’m trying to hold on to and remember. I can’t – nor should I – live my life with the kind of hope or intention that the people around me will suddenly get it, that white people will suddenly do the right thing.”

In the past few months, in the wake of these protests, a discussion has intensified about the whiteness of publishing: 94 per cent of English-speaking authors published annually are white. On Twitter, prominent writers discussed the comparatively small advances awarded to black authors compared to their less commercially successful white counterparts. When Homegoing was bought by Gyasi’s American publisher, Knopf, in 2015, it made headlines – Gyasi had allegedly landed a seven-figure deal (a rarity for any debut, regardless of the author’s age at the time – 25 – and race).

“I think sometimes you can be used as an example of progress or how much better things are getting,” she says. “What this has brought home to me is that you can hide behind the black authors on your list without doing anything to change who’s in the room in your publishing house. When I go into Knopf and I’m not the only black person that I see at the publishing house, I think that would be a sign of a change.”

As Joe Biden’s administration begins in earnest, does she feel hopeful about change? “I feel that it is unwise to attach your hopes or optimism to a presidential candidate,” she says. “While I’m certainly glad to have Biden as the next president if my options are Biden and Trump, I don’t see this as a fix for the problems that ail this country – to do the things that need to be done in order to create a more equitable society.”

“I shouldn’t even say more equitable,” she corrects herself. “An equitable society period.”

Those who experience trauma like Gifty’s might hope to reach a place where they “find closure” and resolve everything that has happened in their pasts. “That place is kind of a fantasy,” Gyasi says. Instead Transcendent Kingdom offers an alternative.

“I wanted Gifty to relinquish her need to have structure around this narrative of her life,” Gyasi tells me. To accept the reality of humanity and get to that other place, which is reachable.”

Near the end of the novel Gifty begins to understand that risk is an inevitable part of living. She realises that her brother was not at fault for his addiction, but merely unlucky to have been one of the few for whose fear of risk is chemically lower. This is something any of us could discover in ourselves, unless we abstain from pleasure altogether.

“Perhaps it would be simple if we weren’t humans,” Gifty says, “the only animal in the world that is willing to try something new, fun, pointless, dangerous, thrilling, stupid – even if we might die in the trying.”