The author, who was born in Bury St Edmunds in 1979 and studied for a PhD in creative writing at the University of East Anglia before settling in east London four years ago, feels this limitation in his own life. He has started questioning why he has so easily subscribed to the mainstream option. “Why am I not more radical? Why can I not let go of the comforts of life? Why do I cling to these things in the same way as everyone else?” But the alternative would be far more difficult: our “hyper-capitalist” society “outright punishes” anyone who attempts to live differently. Even within comparatively left-wing circles, those who devote their lives to environmental activism, for example, are mocked and often excluded from future work. Only a particular, privileged type of English eccentric is accepted as a deviation from the norm – “but you can’t be eccentric on the bus,” Byers said. “The truth is, the vast majority of us choose what’s easiest.”

Everyone has a small part of them, Byers said, that wants to be liberated. In his latest novel, Come Join Our Disease (Faber & Faber), he explores this notion, asking: how free do we really want to be? And what does that freedom look like? At the start of the book, Maya is homeless in contemporary London. She is picked up by officials and offered a “second chance”: a tech firm called Green will sponsor her – give her a job, find her a flat – so long as she agrees to document her “journey” on Instagram, boosting the brand’s philanthropic credentials.

David Miliband: “Only brilliant people win from the centre left” 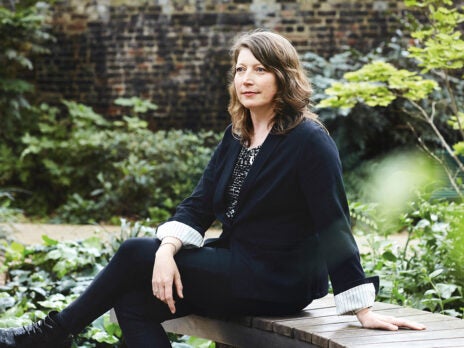 The philosophical case for not wearing make-up

In accepting the offer, Maya loses her freedom; it may come as no surprise that Maya does not stay in her new job very long. Byers has worked in community care and with vulnerable adults for 20 years, and alongside writing currently works part-time for a charity. He wanted to probe the easy choice Maya’s “new start” seems to offer. Moving from a community, “a space where you’re very much in control”, to “a bedsit with no further access to support, moved away from all the people who made you feel safe, having to suddenly sort out the bills, find a job – it’s not as simple as just, ‘Oh that’s great now, that person’s life is sorted out’”, he said.

Byers’s first novel, 2013’s Idiopathy, satirised cultural myopia with caustic humour. Perfidious Albion (2018) cynically followed the rise of a far-right political party in a small town in Brexit Britain. Much of his work has been called “dystopian” but, Byers asserted, Come Join Our Disease is “more of a journey inwards than a journey into an imagined society or world. Where Maya ends up really is our underbelly that we don’t want to recognise.”

After leaving her job, Maya “reclaims” her narrative by taking control of the Instagram account on which she was meant to record her “journey” to “meaning and purpose”. Her diet distorted by the detoxing encouraged by her workplace, she binge-eats, then posts pictures of herself feeling ill. Later she uploads images of her own faeces, unwittingly beginning a social movement opposing wellness and celebrating filth and debauchery.

“I was really interested in the idea of death and decay and putrefaction as forces that stand in necessary opposition and balance to the forces of beauty, happiness and joy,” Byers said. “It’s interesting that we’ve become more and more fixated on individual wellness as we know that the planet around us is decaying. I feel like it’s an unconscious bulwark against what is now this massive collective experience of decay.”

While today this bulwark manifests itself through our obsession with selfies, exercise regimes and “being aglow”, Byers noted that a spiritual interest in decay has for centuries been part of Tantric traditions in India and Tibet. Iconography exists of deities consuming bodies and carrying bones in order to symbolise the duelling forces of life. There is a tradition of people living in charnel grounds, covering themselves in the ash of burned bodies. These people have too remained on the periphery of society.

Throughout the book it is unclear whether Maya is well or ill. Much of what she does – feasting obnoxiously, defecating without getting up – seems disgusting. But it is, Byers said, a matter of circumstance. “Dirt is matter in the wrong place; nothing is inherently dirty. Hair is beautiful in one context and not very nice if it’s in your food. You could say the same about consumption: it can be made to look virtuous and aspirational in one context and ugly and gratuitous in another.”

“We literally and metaphorically never live in our own shit. It’s not just that we go to the toilet and flush it and it goes somewhere else; we throw stuff away and someone takes it away for us and it magically disappears from our life. But what if we lived with all our detritus? What if we lived with all our packaging, rotten food, everything we conveniently get rid of? And what if we also had to live with the consequences of our behaviour, our actions?”

[See also: “There is no either or when it comes to identity”: Yaa Gyasi on publishing’s race problem and human recklessness]