“First there is no Jane Austen and then it’s raining Jane Austen.” When a flurry of cinematic adaptations saw Austenmania hit Hollywood in 1995, even the filmmakers themselves seemed at a loss to say why: Doug McGrath, the director of Emma, speaking to the New Yorker in the same year, observed the phenomenon in this stark, almost divine, binary. In the beginning, there was no Austen. And then, there was.

When Ang Lee’s Sense and Sensibility opened in 1995, it was the first English-language Austen adaptation with a period setting to appear in cinemas for over 50 years. In the same year, we saw a cinematic release for 1995’s Persuasion, Emma take $56m at the US box office reimagined as Clueless, and Colin Firth revitalise Mr Darcy as a modern heartthrob in the BBC’s Pride and Prejudice television series. 1995 was also the year in which both McGrath’s film Emma and a BBC television adaptation of the same novel went into production.

Audiences devoured these new takes on old stories with relish. The BBC’s Pride and Prejudice miniseries attracted 11m viewers per episode, while its VHS, released midway through the series, sold 12,000 copies in just two days. (By the end of October, this figure stood at 100,000: the BBC reportedly had to abandon other projects to reissue it in time for Christmas.)

The Jane Austen House at Chawton in Hampshire saw visitor numbers rise by 250 per cent in October, and saw 57,000 people pass through their doors in 1995. Sales of the original novels were up by 40 per cent at Penguin. In December 1995, the New York Times gasped, “There are even a series of devotional World Wide Web pages”.

Journalists were stunned, variously labeling the rush of popularity “Austenmania”, “Austenfever”, “Austenitis” and “Darcymania”. In a January 1996 article, Vanity Fair labelled Austen “the hottest writer in showbusiness”, she was compared to Quentin Tarantino, and came tenth in Entertainment Weekly’s 1995 “Entertainers of the Year” list.

In perhaps the truest stamp of popular approval, Martin Amis wrote a sneering column in the New Yorker titled “Jane’s World”, in which he praised the author but condemned the world’s “bad taste”, and declared romcoms like Four Weddings and a Funeral “Jane Austen, in a vile new outfit.” In the words of Mary Brennan, in a special for MSNBC, Austen had been “dead for 179 years, an unfortunate condition which has done her career nothing but good”. 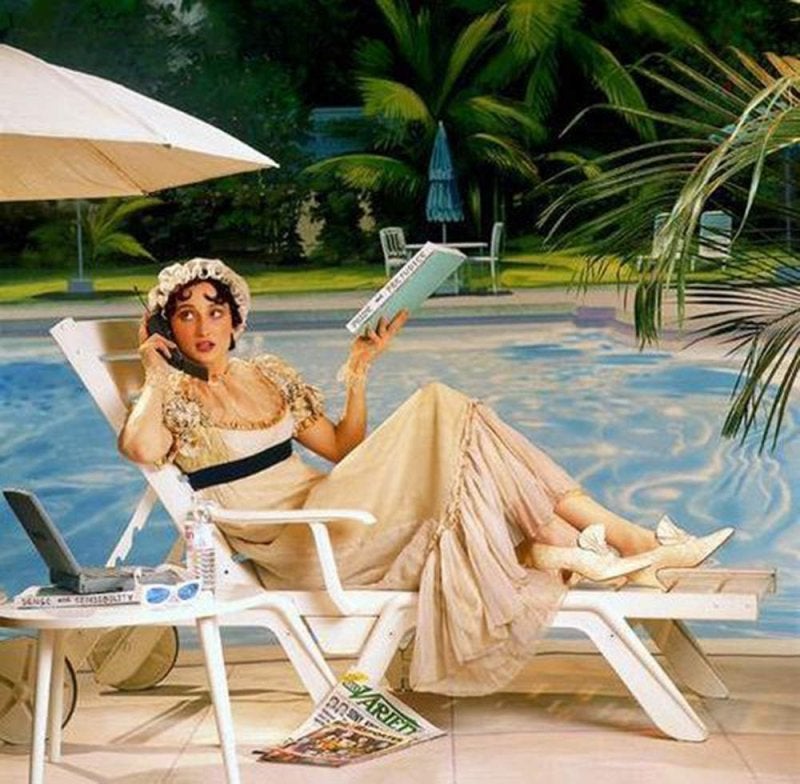 An Entertainment Weekly image of Austen as Hollywood’s hottest scriptwriter.

More conservative critics at the time pointed towards modern society’s failings as the reason behind Austen’s resurgence. Newsweek wrote that her popularity lay in “nostalgia for a more decorous and polite age”, a glimpse of a more secure world in “an age of marriage meltdown”. The New York Times noted, “It is no accident that her novels’ finely detailed accounts of moral and social education should inspire such interest at a time when conservative criticism of American culture is increasingly concerned with failures in those areas”, concluding, “we gaze upon Austen’s world with… envy”.

But conservatives of every decade seems to think that the lastest is the least morally secure, heralding a new era of social decline, and not all flock to Austen. Nostalgia alone cannot account for the suddenness of the Austen revival.

Andrew Higson, in his book Film England, writes that Austen adaptations were able to piggyback onto to two major trends of the nineties: Anglo-Hollywood costume drama production, and the continued rise of the romcom. Films incorporating one or more of these trends, like A Room With a View (1985), Enchanted April (1991), Howards End (1992), The Age of Innocence (1993), Remains of the Day (1993) and Little Women (1994) had done surprisingly well at the box office, so Austen adaptations were a likely success.

It’s unsurprising, then, that like Amis, the film’s promotors were keen to draw a link between Austen and current British romcoms. Aided by the casting of Hugh Grant, the poster for Sense and Sensibility included the Daily Mail quote, “The paciest, wittiest, most entertaining romantic comedy since Four Weddings and a Funeral.” Opposite it sits the Independent on Sunday comment, “Thompson’s best performance since Howards End”: distributers knew that the key to this film’s success lay in its mass appeal as both a contemporary romcom and a traditional period drama.

Exactly why these two genres of film were so popular is another question in itself, but it seems likely that, as Justine Ashby notes, films made by and aimed at women “finally found a place in mainstream British cinema in the 1990s”. While the majority of the Austen adaptations of the mid-nineties were directed by men, they of course shared a female author writing about female experience, and often women were at the heart of the adaption process, like Emma Thompson as scriptwriter and Lindsay Doran as producer on Sense and Sensiblity, and Amy Heckerling as screenwriter and director and Twink Caplan as producer on Clueless.

As Lindsay Doran noted at the time, filmmakers interested in period romantic dramas didn’t believe they were a feasible prospect until the 1990s demonstrated that they were commercially viable: “The idea of investigating romance – does it kill young girls or make them better? – is intriguing to a lot of us. And then The Age of Innocence actually got made. That made it acceptable. Everybody said, ‘Wow! You can get that cast and that director for that?’”

Austen adaptations offered a delicious combination of all these Nineties tastes, with an added dash of English cultural heritage added into the mix. And once Austen’s power of audiences has been revealed, it has continued to evolve and reflect changing times, from the turn of the century classic Bridget Jones’s Diary and a more pouty, windswept mid-noughties Pride and Prejudice, to vlog-style webseries The Lizzie Bennet Diares and a Pride and Prejudice and Zombies adaptation due to satisfy a thirst for women in “badass” action roles. That Austen will continue to influence popular culture 20 years on from her mid-Nineties revival, and almost 200 years after her death, is universally acknowledged.

Topics in this article : Jane Austen