“What kind of books did she write?” asks Armistead Maupin.

If my mum knew that not only was I interviewing her favourite writer, but that – within that interview – he was interviewing me about her, I know exactly what she’d do. She had a special cackle for such occasions. She’d throw her head back and let rip.

In this pleasantly surreal turn of events, I tell Maupin that my mum – a novelist – wrote “chick lit”, although I find that term derogatory, and using it in relation to my dead mother’s canon feels almost sacrilegious (not that she would’ve given a shit). He says he feels similarly degraded when he’s accused of writing “soaps”.

I tell him that the proudest moment in my mum’s career was seeing her books displayed alphabetically next to his, in a Barnes & Noble in Manhattan. Again, Maupin can relate.

“I know that feeling,” he says, “I used to be happy that, alphabetically, I was next to Somerset Maugham.”

In his signature plaid shirt and braces, and with a bushy white moustache, Maupin probably counts – in gay scene terms – as a polar bear. He’s at ease, practically lying down on the plush, Covent Garden Hotel sofa. I’m hunched forward, nervous to be in the presence of my hero’s hero.

Forty-one years after the publication of Tales of the City, the first in a series of novels that chronicles queer life in San Francisco, a ten episode adaptation by Netflix is set to launch on 7 June. And – with a cast including Laura Linney, Ellen Page and Olympia Dukakis – it’s no small deal.

“I feel very blessed that I’m getting to have this thrill at my age,” says Maupin, who acted as executive producer of the show, “I’m 75 and I thought I would long ago be done with this adventure. Mostly because I’m so lazy.”

Laziness is a hard quality to grasp in a prolific author, but self-deprecation in hugely successful people is always welcome. Even though Maupin somehow manages to be (deservedly) big headed at the same time, saying that the offer from Netflix didn’t exactly come as a surprise as he’s, “enough of an egotist to think the best of myself.”

Later, in a Q&A after a screening of Tales of the City, Maupin elaborates on the strangeness of handing his character over to a team of writers. Even when all seven of them are LGBTQ.

“It was difficult at the beginning,” he says, “And when I heard it was going to be an all-queer writing room I thought – democratically – well maybe we should have one straight person.”

The lack of heterosexual involvement in the show, of course, became a non-issue for Maupin when he realised that he was the original all-queer writing team. And having – temporarily at least – passed on the Tales of the City baton, he talks about his amazement at the quality of work coming out of the writers’ room.

“I didn’t step in much,” he says, “I just stood by with wonder at what they were doing.” 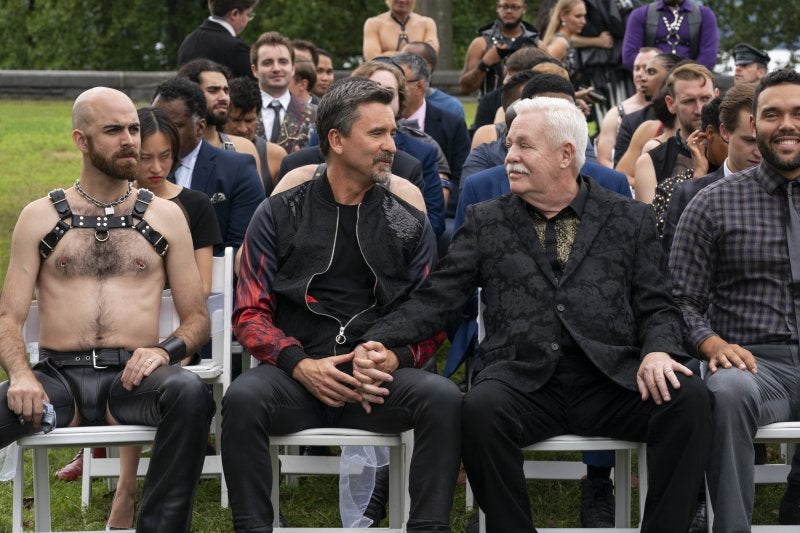 A still from Tales of the City Credit: Netflix.

Back in the hotel, I ask Maupin about one of the most prominent themes in Tales – the idea of choosing your own family.

“My family, bless ‘em, continued to profess their love for me after I came out,” he says, “and they continued to vote and campaign for Jesse Helms, the biggest homophobe in the US senate.”

Maupin’s upbringing was conservative, even by “North Carolina in the 50s and 60s” standards. His parents – although not strictly religious Episcopalians (he says they’d hate to hear him say that…) – never quite came to terms with their son not only being a gay man, but a very well-known one. Although he quotes his father as saying, “Well if my son’s gonna be a faggot, at least he’s a famous one.”

“I don’t think he meant that,” says Maupin, “it was a good line. He had a way of using humour to get past the things he didn’t like.”

In a similar vein, having read his son’s work for the first time, Maupin’s father said, “Your mother and I read Tales of the City today; moving to Zanzibar tomorrow.”

I ask Maupin if he thinks his own wry humour comes from his dad – a trial lawyer who he describes as a “big ham” who “loved an audience.” Ironically perhaps, he thinks it does. It’s interesting that as much as some distance themselves from parents with whom they have little in common, nothing can override that combination of nature and nurture that leaves their best and worst traits in its wake. Essentially, Maupin believes he’s funny because his homophobic dad was.

Maupin’s mother had less of a sense of humour about her son’s coming out, which, by the way, was conducted via a letter from one of his characters – Michael “Mouse” Tolliver – in Tales of the City. Mouse’s coming out to his parents was Maupin’s own. The author was 32 at the time, and his mother was dying of cancer.

“I’m happy that you’re happy, darling,” she said, according to Maupin, “But I don’t want this to hurt your career.” To which he replied, “Mummy, this is my career.”

Lacking the full acceptance of his parents, Maupin began to look for familial support elsewhere. “And I found it in marvellous places,” he says, “Christopher Isherwood was a huge inspiration to me and I became his friend.”

Maupin says it would be presumptuous of him to consider Isherwood – who was 40 years his senior – his mentor (again with the self-deprecation).

“But he was definitely a wise friend,” says Maupin, “Sort of a grandfather figure, really.”

Maupin was a regular at dinner parties held by Isherwood and the older author’s partner, artist Don Bachardy, at their house in Santa Monica.

“Every generation was represented around the table,” says Maupin, “So there was a sense of queer genealogy – that you were linked with people in the past who had been like you.”

At these gatherings, which sound a hell of a lot like something from Maupin’s novels, Isherwood would tell affectionate stories about E M Forster and W Somerset Maugham – both of whom he knew. In Isherwood’s circle of literary queers, old and young, Maupin found his family.

Meanwhile he was warned – Maupin tells me – by his father that the “extra stress” placed on his mother through her son coming out as gay could kill her. At which point I can’t help thinking about my own mum’s death from cancer and how – when she was ill – she kissed my girlfriend on the cheek and told her she loved her. There’s nothing, as a gay person, quite like talking to older queer people, to make you feel the face slap of your own privilege.

Then again, for a 75-year-old white man, Maupin seems pretty well aware of his privilege. Particularly when it comes to the representation of trans people in his writing. Maupin is often credited with the creation – in Anna Madrigal – of the first ever sympathetic depiction of a trans woman in fiction. For those who aren’t familiar with the Tales series, the narrative centres around a house, 28 Barbary Lane, converted into apartments. The landlady, Mrs Madrigal, acts a kind of surrogate mother for all the younger people, an assortment of outcasts and misfits, who live there. A sympathetic landlady, nowadays, is probably a more shocking thing than a sympathetic trans woman but – in the 70s – having a central character who was trans was revolutionary.

Tales of the City began as a serialisation in the San Francisco Chronicle. Initially, it’s clear that Mrs Madrigal has a secret. This turns out to be her gender identity, something that made Maupin’s editors “apoplectic”.

“They said you cannot reveal that secret for at least a year, or we’ll lose our readers.”

But this delaying of Mrs Madrigal’s coming out, according to Maupin, turned out to be a blessing in disguise. It gave him time to develop her as a character and get his readers on her side. So, by the time she came out as trans, “It wasn’t that big a deal.”

I can’t help lowering the tone by asking one of the greatest living queer writers about hook-up culture. Tales of the City is packed full of as many saunas and one-night stands as you’d expect from a series about queer people in the age of sexual liberation. I ask Maupin what he thinks of the digitisation of so much of that side of the LGBTQ experience, in the form of apps and online dating. He looks sheepishly at the Netflix PR guy in the room with us, and asks him if he should tell me his clearly very rehearsed line on this subject. We both urge him to go for it.

God I wish my mum was alive to hear this.

Tales of the City is available on Netflix now.