What makes a great sculpture? I mean that literally, materially. Until a century ago, when Marcel Duchamp placed a ready-made urinal in an exhibition in New York and blew apart the notion of what a 3D work of art can be, sculptors had equated quality of materials with the loftiness of their art form. From Michelangelo and Donatello to Rodin and Degas, a reference to “sculpture” itself was inherent in work carved in Carrara marble or cast in bronze, tracing a direct lineage back to the ancient Greeks.

Since Duchamp’s Dadaist disruption, sculptors have tended to fall into two camps: those who fetishise the sleek and flawless, and those who embrace scrap, detritus, offcuts, household paint, objets trouvés, the everyday, in pursuit of their art. For every monumental Henry Moore figure there’s a Jean Tinguely scrap sculpture; for every glossy Jeff Koons “inflatable”, a Joseph Beuys felt and animal fat vitrine.

The worship of gloss and glitz reached its zenith in 2007 with YBA Damien Hirst’s diamond skull – valued at £50m – and his multimillion-pound sale at Sotheby’s in London the next year, for which he churned out more than 200 spin paintings, animals in formaldehyde, cases of butterflies and crystals for high-roller collectors. The preview opened the day of the collapse of Lehman Brothers and presaged the global financial crisis. It couldn’t have been a more symbolic climax to pre-recession decadence and a bloated and hyper-commodified art scene.

Two exhibitions that recently opened in London show two artists born around the same time who embody the opposite of this approach. Both in their own way challenge the genre of sculpture in their choice of inexpensive, base materials, while showing a healthy lack of reverence for their work itself: in the case of Phyllida Barlow, grappling with it, destroying it, pushing it to its limits and relying on chance; for Franz West, slopping paint around haphazardly, incorporating objects at random, blurring the boundaries between sculpture and furniture.

While their choice of materials may seem born out of convenience and economy, they are deeply personal; central to their interior lives, while reflecting their external reality. For West, it was the materials of the school art room, the family home, local businesses: papier mâché, polyester, wire, old furniture, paint colours associated with offices, urinals, dentists. For Barlow it’s the brutal vocabulary of the street, the looming cranes of the building site: labourer’s plaster, cement, polystyrene, tarpaulin, cheap timber, metal struts and bright utilitarian spray paint.

Born in Vienna in 1947, West started producing art there in the 1970s and was active until his death in 2012. He inhabited a space both inside and outside the art establishment, and perhaps of local society, too. A native Austrian with a dentist mother and coal merchant father, he was nevertheless from a non-observant Jewish background, growing up in the immediate aftermath of Nazism in filthy, bombed-out Vienna.

Tate Modern’s retrospective, Franz West, shows his sculpture divided into several phases. The first is the passtücke, small portable works intended to be picked up and interacted with. Mostly painted white with a chalky finish, they are made from materials as diverse as papier mâché, plaster and chewing gum. Some, such as Untitled (1974), incorporate a radio, others coil like pretzels or protrude like mad implements. The viewer is encouraged to take replica passtücke into curtained-off booths to interact with them absurdly. This art is egalitarian, literally accessible. As in many of his acerbic, pervy sketches and collages, West parodies the Viennese actionists, his artistic predecessors, and their earnest, visceral “happenings”. 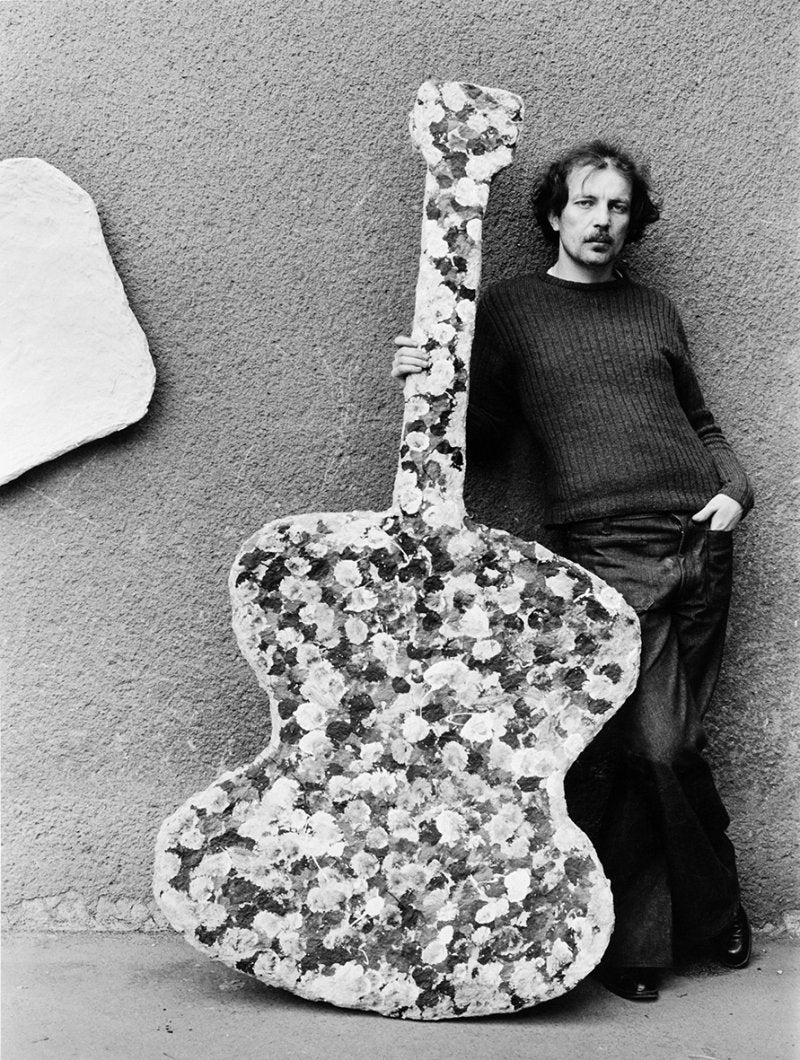 It’s in his next phase, the “Legitimate” sculptures (not to be touched) starting in the mid-1980s, that West fully embraces papier mâché, a “low”, childish, lumpy pulp looked down upon by everyone from the minimalists to those working in the tradition of Duchamp. He seems to revel in this, happily cocking a snook (or indeed a cock) at the establishment, while his messy proliferations sprout at random. Here he bursts into vivid colour too: a hospital arsenic green and a dental putty pink; sherbet yellow and orange. The paint is cheap acrylic – often mixes rejected by other artists. Sometimes West would slosh it on to his work absent-mindedly while on the telephone.

Abstract works from this period are displayed mock-reverently on breeze block and MDF plinths designed by Sarah Lucas. (West had a long tradition of collaborations; Lucas has also made dividing walls out of grey cement, a striking backdrop to the work.) Some pieces are playfully sexual, like two called Untitled (1984): one mustard yellow with a thin, hosepipe penis; one puce pink with ping-pong-bat breasts. In a line of skewed, spindly works the paint-daubed Deutscher Humor (1987) has a broomstick stuck up its papier-mâché bum, a send-up of Germans and their perceived stick-up-arse mirthlessness. Another series, the Labstücke, incorporates empty booze bottles: West had consumed the contents and they had to be woozily subsumed into his art.

It’s in his furniture pieces that West most successfully fuses his use of the everyday object with an interest in psychoanalysis and the unconscious. Early in his career he’d taken his mother’s surname and some of his first work he called Mutter Kunst (art to please one’s mother). Here, in his harnessing of familial furniture he cultivates an air of idleness and leisure, but also inserts something menacing and punitive into the family home with cold metal edges, prison-like bars and thin newspaper for cushions.

In the institutional green Eo Ipso (1987) he deconstructs and elongates his mother’s old washing machine to create three chairs, positioned absurdly far from each other. Untitled (1990) combines a wiry, skeletal “love seat” with a bulging, dun-brown papier mâché picture behind. It seems monstrous and rotten – as if all West’s childhood books and papers have been chewed up and spewed out on to a canvas. The leaden, Etruscan-inspired Zitat (1985) is West’s childhood bed covered in layers and layers of silver foil: an obliterated and distorted memory.

All the furniture pieces were jokily functional and intended for use, but West flipped the artist/viewer relationship on its head by elevating them on pedestals, making the viewer a conspicuous part of the work. It’s a far cry from “no sitting” signs. For the Documenta contemporary art show in Kassel in 1992, West created Auditorium, a series of 72 metal couches covered in Persian rugs that provided a meeting place within the exhibition – as well as becoming an interactive sculpture. It’s the most explicit reference to Freud’s consulting room and, though it seems a bit squeezed into the space here, makes a great impact.

West’s later sculptural work is characterised by larger outdoor pieces in vivid monochrome – baby blue, flesh pink, apple green – like blown-up kids’ squiggles. They provide a humorous alternative to pompous, monumental public art. They are sausage-like, scatological, phallic or intestinal (like Rrose/Drama, 2001), or doughnutty orifices to be lounged on (Cool Book, 2007). Some retain West’s cheap kindergarten materials, such as the blobby pink polystyrene Epiphanie an Stühlen (2011), like a huge germ cell, but most are lacquered aluminium or resin, the joins always showing. What they share is a childlike mischief and an utter disregard for the sanctity of sculpture. When West died, one of his loopy pink phalluses was erected over his grave instead of a headstone – an appropriately eccentric, defiant last testament. 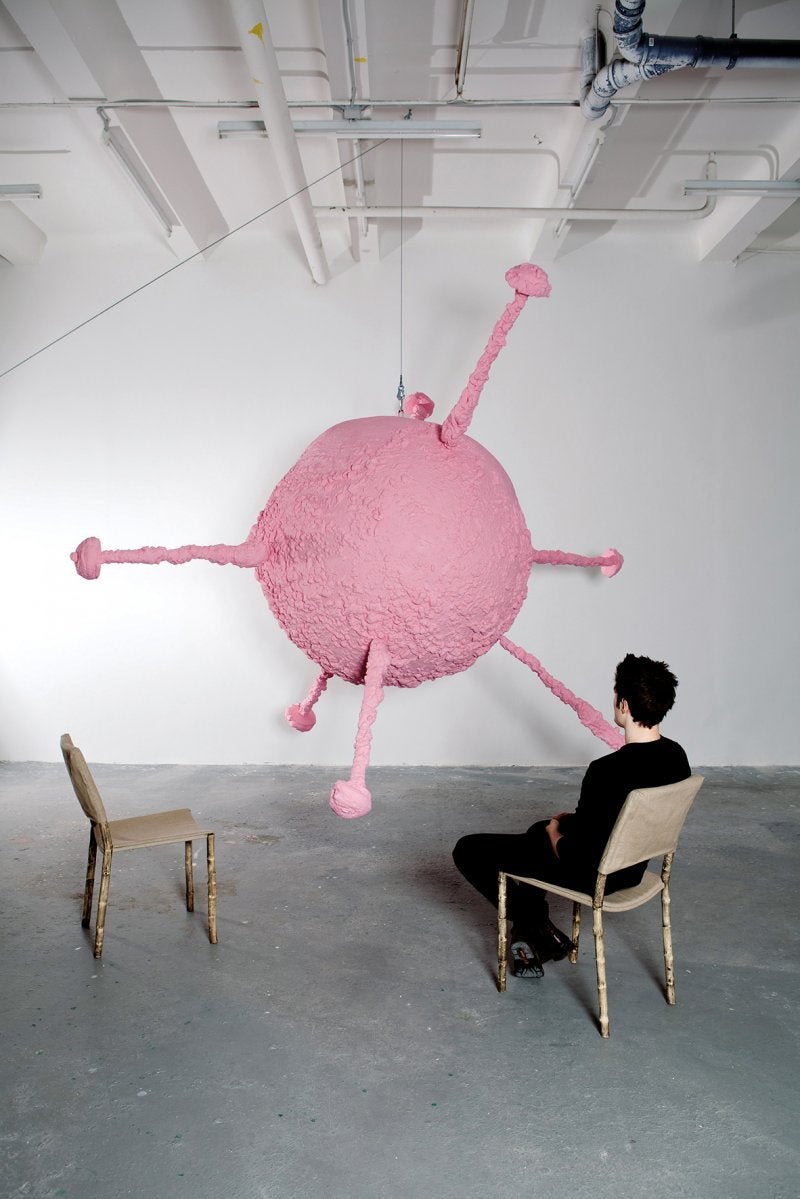 Epiphanie an Stühlen (2011) by Franz West

Phyllida Barlow, born in 1944, came to prominence around the time West became ill, although she had taught for many years, principally at the Slade. In 2014 she filled the Duveen Galleries of Tate Britain with one of her colossal flotsam assemblages; in 2017 she represented Britain at the Venice Biennale and crammed the pavilion with her signature gigantic, bulging forms made of workaday materials – perhaps not for nothing, Barlow’s ascendance coincided with the era of austerity after the financial crash. Her work often has a sense of instability, overrunning the spaces it appears in. If it sometimes intimidates, like West’s work it’s also rich in humour and absurdity.

For Cul-de-sac at the RA, Barlow has caused a roadblock: you can’t see through to the second gallery from one direction because there’s a great grey column obstructing the way, and instead of exiting the gallery you reach an impasse and have to come back. This way you get a fresh perspective on the huge work and the view suddenly makes sense. And, fittingly, this is the stuff of the street, of roadworks, construction and the scrapyard. The work is unsettling as well as uplifting. Built to fill the full height of the Duveen Galleries, Barlow’s sculpture draws the eye upwards while her base materials keep you grounded. In the first gallery billowing tarpaulins or banners protrude from concrete piles (Untitled: Canvasracks, 2018-19): painted red, green, orange and yellow, they seem vibrant and celebratory like giant shrouded figures processing in a ring. 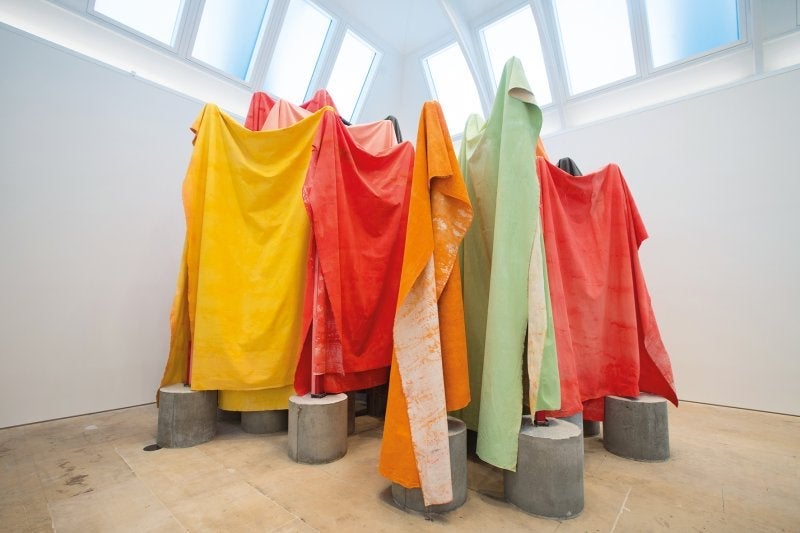 Opposite is a towering wood and concrete arch (Untitled: Lintelshadow, 2018-19) rising from what could be concrete foundations or, equally, bomb defences. The whole thing seems precarious: spindly wooden struts appear to bear a block of solid concrete that has risen up from its base, an inverted shadow, but is in fact polystyrene. There are punkish dots of bright spray paint – Barlow favours those used by workmen: pink, yellow, red (but not blue). On the walls are clumpy masses of painted plaster, pocked like porous rock and, in the next room, more delicate whorls of metal, plaster and scrim: they resemble balls of kinetic energy or dark matter. In the same room a slanted platform of weathered pallets stuck through with wooden posts like old river moorings (Untitled: Shadowplatform) continues the sense of debris hurtling through space, but also has the delicacy of a silver birch forest.

The third room is dominated by a triptych of wooden structures bearing huge white monoliths (Untitled: Blocksonstilts). They’re half War of the Worlds tripods, half medieval trebuchets. The timber seems scavenged and is daubed with spots of paint, bound with scrim and plaster. The blocks still have instructions scrawled on them as if they too are scrap – yet there is a striking contrast between Barlow’s apparent irreverence for them and the fact they are lifted up and exalted like holy relics or precious cargo. A religious motif seems hard to deny in the vast arch that abuts the false exit (Untitled: Scrimtripod). Rendered in steel beams and swathed in hessian, it nevertheless suggests a canopy for a wedding or sacred ritual. 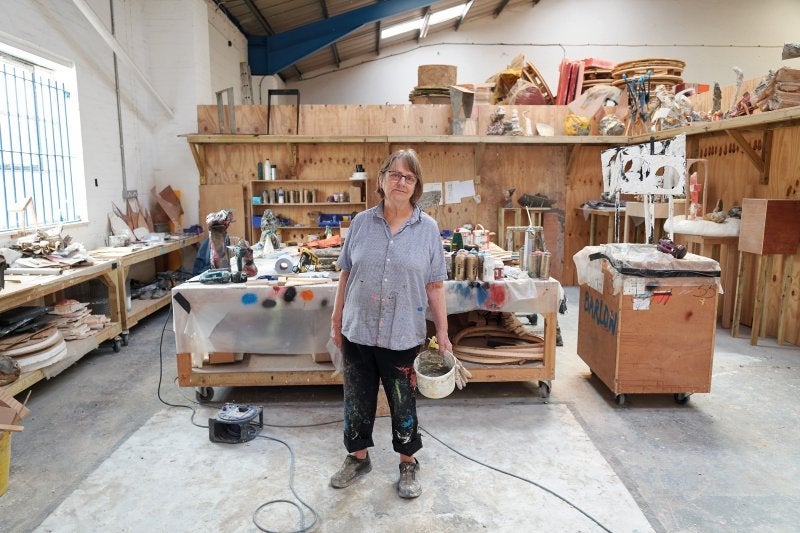 Phyllida Barlow in her studio

At the other side of the room, what looks like the fin of a bombshell bisects a gnarled grey pillar, creating a rudimentary cross (Untitled: Post). These wrecks and ruins, all the mess of human existence, are a world away from shiny, hi-spec Koons, work Barlow terms the “made-easy object”. Barlow’s work isn’t easy, either in the making or viewing – and yet something bursts through the grit and the chaos, transcending form and fabric, reaching up to the light.