At 72, the writer James Kelman has published nine novels, 13 short story collections, two essay collections and several plays. He has been compared to Beckett, Kafka and Joyce, and labelled the “greatest living British novelist”.

But to some, what Kelman does is not literature at all. In 1994, he won the Booker Prize for his fourth novel, How Late It Was, How Late, the tale of Sammy, an ex-con beaten to blindness by plain-clothes police (“sodjers”, in Glaswegian dialect), and his subsequent attempts to navigate the hostile and unavoidable limbs of the state. It is a brilliant, inventive book, full of jet-black humour. It is also the most controversial winner in the prize’s 50-year history, provoking a violent response that went beyond questions of merit.

One judge, Rabbi Julia Neuberger, called the book “crap” and, threatening to resign from the panel, said it would win “over [her] dead body”. When it did, British broadsheets questioned the legitimacy of the prize with outraged headlines such as “How Unreadable It Was, How Unreadable” and “Isn’t it time to close the book on this farce?” Journalists counted the number of swear-words in the book; Blake Morrison estimated that “fuck” appeared 4,000 times. In the Times Simon Jenkins launched into a furious invective, labelling Kelman an “illiterate savage”, his win an act of “literary vandalism” and the novel the ramblings of a “blind Glaswegian drunk”. Kelman, eschewing a dinner jacket for a suit and tie, gave a speech at the award dinner calling the sneering criticisms of his style tantamount to racism: “A fine line can exist between elitism and racism,” he said. “On matters concerning language and culture, the distance can sometimes cease to exist altogether.”

Fellow Scot Robin Robertson (now a Booker-shortlisted author himself) published Kelman in the early Nineties, as well as Alan Warner, Irvine Welsh and AL Kennedy, creating a literary set of Scottish writers. (In 1995 the group were photographed by Richard Avedon for the New Yorker – except Kelman, who failed to turn up to the shoot.) Robertson was unsurprised by the reaction to Kelman’s win. “I’d already seen the fury that Trainspotting provoked,” he tells me, “and how it had been blocked from the Booker shortlist.” He recalls the publishing scene of the Nineties as “very clubby and conservative”, and was keenly aware of a “cultural resistance” to the books he published. “There was a palpable sense that publishing was an occupation for men with an Oxbridge degree and a private income,” he says. “I was delighted to let their representatives expose their bigotry in public.”

The Scottish journalist Alan Taylor, a long-time champion of Kelman’s work, was one of the judges that year. He remembers Neuberger as “the single dissenting voice” against Kelman (“words such as terrible, boring, monotonous, Glaswegian poured forth with a bile that belied her religious status”) and has strongly criticised the “infantile stereotyping, faux metropolitan sophistication and crass attempt at humour” that followed his win. When we speak on the phone, Taylor calls Kelman “a supremely generous artist”, comparing him to Chekhov and Cheever. There is, he says, a wilful misunderstanding of him as coming from some kind of “Glasgow hardman school”. But “there’s no school of James Kelman,” Taylor says. “He’s a one-off with an astounding range of tenderness and humour.”

When I meet Kelman at a cafe on Glasgow’s Great Western Road, he uses the word “suppression” to describe the publishing industry’s response to his work. It’s true that the vitriol it inspired was more than a clutching of pearls at the word “fuck”. (“So folk in England, they don’t swear? Well, I’d question that!” laughed one vox-popped Glaswegian caught on television cameras soon after the Booker Prize ceremony.) Dillons, then the second biggest booksellers in the UK, declared that it would no longer stock Kelman’s books. Another major bookstore in Glasgow displayed every Booker winner execpt for his. “And that’s in my own city.” He gives a disbelieving laugh. “And they want to know if the negativity had an effect?”

Kelman’s earliest years were fairly typical for a working-class boy of the period. Born in Glasgow in 1946, he attended school until he was 15, then started work as an apprentice compositor. He was a voracious reader with the luck to have a library, Elder Park, at the end of his street. In his twenties he began writing stories.

In the early 1970s, he enrolled in an extra-mural creative writing group led by the poet Philip Hobsbaum, attending unless shift work made it impossible. It’s a time Kelman talks about in detail, though not with misty-eyed nostalgia: he was newly married, with children soon on the way, and little money or time for writing. Though Hobsbaum recognised and encouraged his talent, some were bewildered by his use of “the language of the gutter”, as one of Kelman’s classmates put it.

In 1973, his first short story collection, An Old Pub Near The Angel, was published by a tiny American press (his first story was published in England only after York University students took matters into their own hands when a local printer had refused due to its profanity). It’s an alarmingly mature collection from a debut writer, full of sharply rendered voices. Few writers give as much shape and space to characters as Kelman does: daytime drunks and small-time crooks, night-shift workers and beat-down teachers, blokes holding out for ever-more emaciated benefits: people grasping at dignity where they can, and daring to talk, as well as think, in their own vernacular.

Kelman’s process hasn’t changed much throughout the years. “It’s a case of sitting down to start work. Some of that is based on exigency, I was always working, at that age.” He considers writer’s block a “middle-class conceit”, stemming from the comfort and space that privilege affords. There has always been a romance afforded to the artist with a day job, from Philip Larkin’s 30 years at Hull University Library, to Peter Reading’s decades as a Shropshire weighbridge operator. Rarely is it described as the sheer necessity of earning a living. Kelman has had many such day jobs, variously working as a bus driver, a factory shift-worker, a labourer on London’s Barbican estate, a private tutor and, in the late 1990s and early 2000s, a teacher of creative writing at the University of Texas.

“There was never time, in that sense, to sit around wondering what to write about. If this is what you do, then you need to be doing it,” Kelman says with a smile. 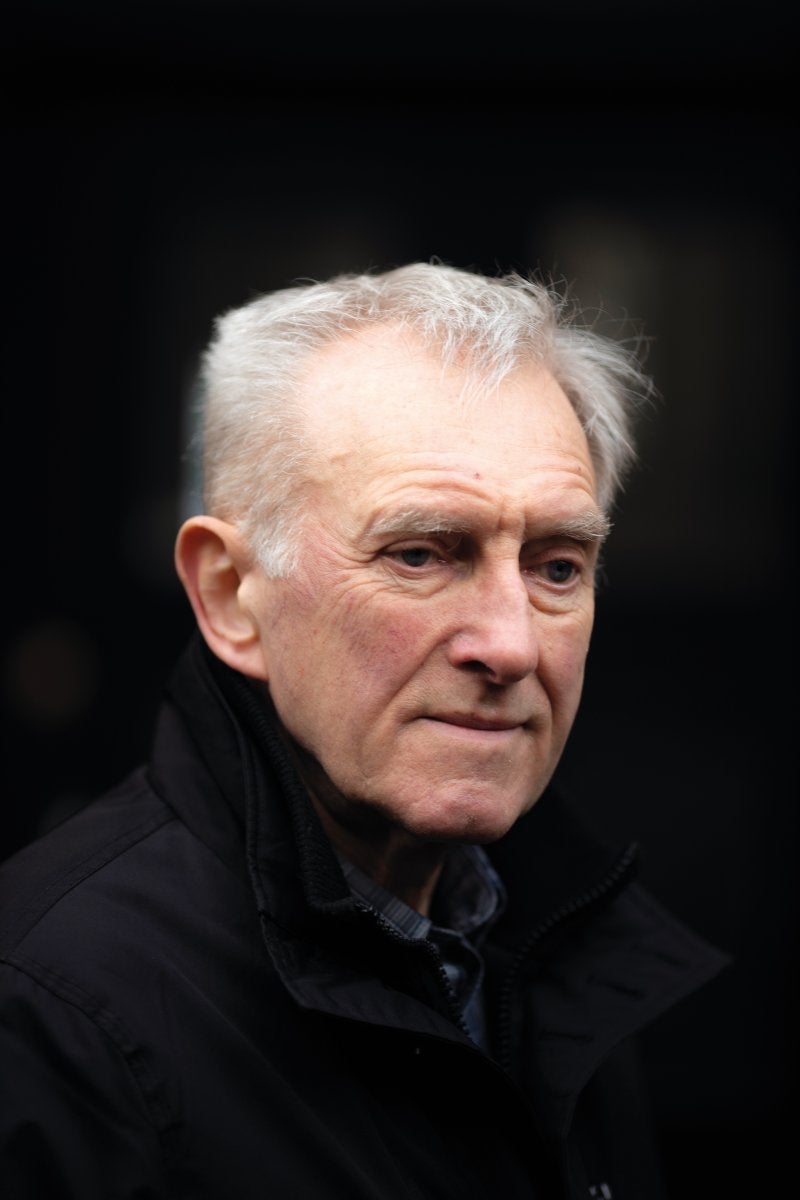 Does he have a sense of writing as a vocation? “No,” he says firmly. “I see it as an aesthetic and political commitment, it’s not a vocation. Again, it implies a kind of middle-class sensibility, which I’ve never really experienced. Life has always been more pressing than that.”

Kelman is a staunch, lifelong internationalist socialist. He came out in cautious favour of independence before the 2014 Scottish referendum, despite finding nationalism uncomfortable. “But you just have to face up to that,” he says over a second cup of tea. “There are many people who voted with the SNP in the referendum who are really anti-nationalist, and unfortunately that maybe doesn’t get the air time.”

Kelman is frequently accused of “anti-Englishness”. What he is, he explains, is anti-establishment. “So much of [British life] is based on hierarchy, and that includes things that are essentially existentialist, such as art.” He sees much of British art and literature as out of touch with the realities of life for many of its citizens. “It is divorced from what it means to survive as a human being,” he says. “British culture doesn’t involve itself in the lives of human beings, because if it does it has to admit to hierarchy.”

Kelman sees the Brexit vote as a coup for the establishment. “The ruling elite and their diverse loyal orders have sought to exit the EU for years. The free movement of capital and the right to profit are the sole motivation,” he says. “Laws and statutes that protect the individual hinder the accumulation of wealth. Departments of Human Resources funded by global interests will suffice for what remains of democratic control.”

Years before How Late, in 1989, Kelman made the Booker shortlist for A Disaffection, the story of Patrick Doyle, a bitter 29-year-old comprehensive-school teacher teetering on the verge of existential collapse. “I was asked if I ever revised, ‘or did it just come out’,” he recalls in an afterword to one of his short story collections. “It jist coes oot, ah says, it’s the natchril rithm o the working class,” he replied.

Not much, it seems, has changed in the intervening decades. When 2018’s Booker Prize was awarded to the Northern Irish writer Anna Burns for her novel Milkman, it came with the same sneers that Kelman experienced in 1994. Responses ranged from pseudo-critical (“challenging”, “contrarian”) to overtly hostile (the benefits Burns lived on while writing the novel could have been put to better use) or merely patronising (one critic concluded it “may not be the best novel” of the year, but is “plucky”). The conflation of working-class lives with “difficulty” is best understood as a product of an establishment that seeks to suppress difference, Kelman says.

It’s difficult, he adds, to get his work out there. His latest books (Dirt Road and That Was A Shiver) were released by Canongate, but Kelman does not currently have a UK publisher. His work “hasn’t been properly sold”, he insists. “I used to wonder why.”

Kelman is not the only Scottish writer he believes to have suffered this fate. “Tom Leonard is a major poet marketed as a ‘writer of phonetic Glaswegian’: no one is going to read him. On the other side of it, someone like Irvine Welsh is described as a phenomenon. What is safe about his work that allows him to be described like that?” Like Leonard, Kelman believes his work has been overlooked. “Not exactly suppressed,” he says, “but it is perhaps marginalised.”

He realises this sort of talk might seem hyperbolic. “The language you use to rebut these mechanisms risks being called conspiracy theory talk,” he says. But he sees the British establishment as “keeping a lid” on Scottish writing by painting it as “genre fiction”, while elevating inferior English writing as literature. “There’s no question that Scottish writers are by far the superior at the moment. Ali Smith, Alan Warner, Jenni Fagan – t­here’s no equivalent in England. I won’t embarrass them by naming them, the mediocre [English] writers.” There is, he argues, a deliberate “denial of aesthetic merit” of Scottish work. In the 50-year history of the Booker Prize, Kelman is still the only Scot to have won.

In 1994 Kelman was, in Robertson’s words, “a persistent thorn in the side of the English establishment”. But it seems absurd that in 2019 a major author still writing at full capacity is so undervalued in the UK. “I finished a novel about a year ago, but I don’t think anyone will publish it,” he says. He has plenty of supporters and friends who champion his work, but Kelman still feels ostracised by the literary world. “He should be a natural contender for a Nobel Prize in Literature every year,” Taylor tells me. “But that needs a group of petitioners. And he’s an outsider, as a great artist should be.”