When I arrive to meet Leïla Slimani, her photo shoot is drawing to a close. As the photographer is packing up, he speaks to Slimani at rapid-fire speed about her work as a journalist in North Africa, his own travels to Turkey and Afghanistan, and her literary prizes. He pulls multiple copies of Adèle out of his bag and asks her to sign them. After she agrees, he excitedly looks at me and says, “Do you realise who this is?” Slimani looks up and laughs. “It’s Leïla Slimani! She’s a star!”

Lullaby, Slimani’s first novel to be translated into English, was a global hit – it’s being adapted into a film, due to come out in France later this year. The story, set in central Paris, focuses on Myriam, a French-Moroccan lawyer, grappling with returning to work after years off to care for her two young children. When she and her music producer husband, Paul, hire Louise to look after their kids, they brag that they have “the perfect nanny” and become increasingly dependent on her help. Over time, their relationship turns sour as Louise becomes controlling and intimidating and Myriam and Paul question their decision in hiring her. But, before they can act on their bad feeling, their children are dead. Louise murders them in the bath on a weekday afternoon before attempting to kill herself.

If you think I’ve spoiled the ending, I haven’t. The first sentence of the novel is, “The baby is dead.” What follows is an unsparing description of an infant and toddler murdered by their nanny. “I love details,” Slimani tells me. Adèle, Slimani’s latest book to be translated into English, is about a woman living in Paris who is married to a doctor and has a young son. She is pretty, a journalist and a sex addict. Slimani alerts the readers to Adèle’s sex addiction by its second paragraph and her adultery by its fifth.

Adèle was actually Slimani’s debut novel, published in France in 2014 (its French title, Dans le jardin de l’ogre, translates to “in the garden of the ogre”). Lullaby (Chanson douce) was published in France in 2016, winning Slimani the Prix Goncourt prize. In November 2018 she was named by Vanity Fair France as the second most influential French person in the world, ahead of her boss Emmanuel Macron at number five. (She was appointed Macron’s francophone affairs minister in 2017.) Slimani worked as a journalist reporting in North Africa during the Arab Spring, and has written books about sexuality and women’s rights in her home country, Morocco. Adèle is partially inspired by the sex scandal surrounding French politician and former managing director of the IMF Dominique Strauss-Kahn, which was in the news around the time she wrote it.

If Sally Rooney is her generation’s essential writer on sex, Slimani, 37, is its most compelling writer on violence. Her prose is grotesque and vivid; indulging nothing that doesn’t need to be indulged. In Lullaby, Louise looks at her own child and thinks about how she wants to “dig her nails into her daughter’s soft skin”. When Adèle wants to feel the extreme sexual violence she craves, she begins “scratching violently from her vagina to her anus” until she breaks skin. In one of Adèle’s most dramatic sex scenes, Adèle hires two prostitutes who beat her so brutally that the next day, her pubis is “purple”, she can’t urinate, and her vagina is “just a shard of broken glass, a maze of ridges and fissures”.

“When I started to write Adèle, I knew I had to go as far as I could to write the description of violence,” Slimani tells me. “I can remember my publisher said, ‘This woman… She wants to suffer. She wants to feel something so much that of course she will experience violence, and that she’s not just having sex, she wants men to beat her. Because she feels nothing. We need to see that.’ So violence appeared because it had to.”

Even when not violent, Slimani’s descriptions can be stomach-turning. In Lullaby, one character drinks spoilt breast milk, described as the taste of “rotting melon”. Another scene shows Myriam finding a chicken carcass she’d thrown away sitting on her kitchen table – Louise having fished it out and scraped the last remaining shreds of meat off it. “The shiny, yellowish cartilage resembles dried pus… No meat remains, no organs, nothing that could rot, and yet it seems to Myriam that it is a putrescent carcass, a vile corpse that is festering and decaying before her eyes.”

The brutal language and dark themes are juxtaposed with luxurious Parisian apartments, stylish clothes, retreats to Greek islands and oysters on the beach. The horror coexists with her characters’ bourgeoise lives in one of the world’s most glamorised cities.

“I like to write about appearances, that you’re not exactly what you look like,” she says. “And Paris has this image of a glamorous city, a city of love, of culture, of beauty. But it’s not only that. It’s a city of violence, misery and loneliness.” 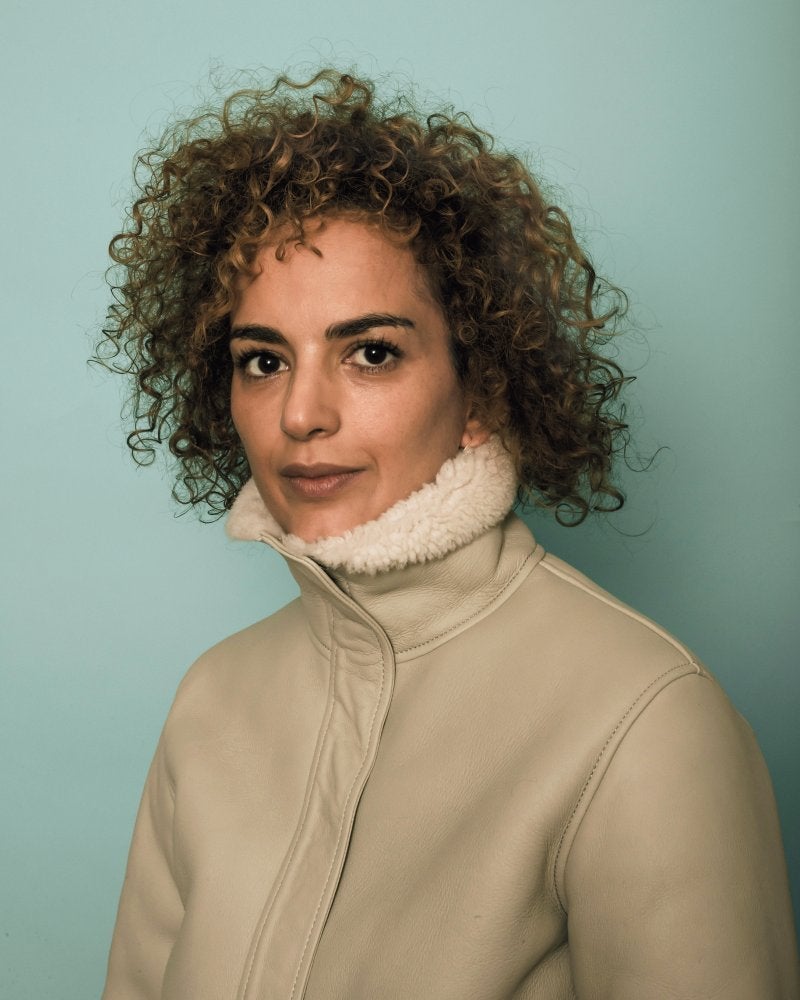 Leïla Slimani, photographed for the New Statesman in London by Kalpesh Lathigra

Slimani was born in 1981 in Rabat, Morocco, to a liberal, affluent, French-speaking family. “I was bored, really bored, when I was a child,” she tells me, “and I always had a feeling that building a family was something wonderful – and something awful.”

Her mother was an otorhinolaryngologist (an ear, nose and throat surgeon) and her father, Othman Slimani, was a prominent banker who served as head of Morocco’s ministry of economics and president of CIH Bank. He made headlines in 2002 when he was falsely charged and imprisoned for embezzlement, and died in 2004 from lung cancer before he was exonerated. “I loved my parents very much and they always let us do whatever we wanted,” Slimani says. “They taught us values about freedom, emancipation, and equality between men and women.”

But, as loving as her parents were, Slimani hated family life. “It gives you a lot of affection, protection,” she explains, “But at the same time you have to forget about your own individuality, you have to sacrifice a lot of things. Family, to me, is a prison.” More than motherhood, sex or marriage, this is the crux of Slimani’s novels: how families can be a torture chamber, home to the worst things in life.

Married with two children of her own, Slimani says that her novels serve as manifestations of her greatest fears. Her fear of losing her children drove her to write Lullaby; her fear of addiction – or of losing one’s personal freedom – drove her to write Adèle. Her third book will also deal with something she is afraid of: “Like a trilogy,” she tells me, “I think the three books will form your worst nightmares.”

To write Adèle’s sex addiction, Slimani met with multiple psychiatrists who helped her build the surprisingly normal life surrounding Adèle. “They all told me that all the women they met with sex addiction were married,” Slimani says. “And most of them belonged to the bourgeoisie.” What’s more, they were obsessed with having the perfect home and being the perfect wife.

“I was like, ‘Of course: Adèle is married,’” Slimani tells me. “She needs this protection, because that’s why she escapes.”

So, Adèle is also about a marriage. Richard, Adèle’s husband, is a hard-working doctor who yearns to move out of Paris and live a quieter life. While his behaviour towards Adèle initially mirrors that of a considerate husband, it becomes clear that he is controlling and clinical. He eventually moves her to the country, takes away her phone, money, and transport links, and uses their young son as his “little spy”. When Richard discovers Adèle’s countless affairs, he says, “If I wanted to, I could kill you, Adèle. I could strangle you right now.”

Beyond the drama of their lives Adèle, Louise and Myriam, the three leading women across her two novels, are relatable. They could be our friends, family, colleagues or neighbours. Inspired by classic works such as Anna Karenina and Mauriac’s Thérèse Desqueyroux, her characters tend to be married women, with children, and trying in some way to combat an oppressive boredom.

“I asked myself, ‘Who would be Madame Bovary today? Who would be Anna Karenina? What would she do?’” Slimani says. “Who is the married woman who is bored, who is trying to find something, now?’”

Now living in Paris, Slimani works as Emmanuel Macron’s appointed ambassador to “represent the open face of Francophonie to a multicultural world”. She works with French-speaking countries (Morocco, Tunisia and Senegal) to develop educational and cultural programmes to promote the use of French and the learning of languages in general.

“For years in Morocco, Islamic conservatives said, ‘No, you shouldn’t speak French, you should speak Arabic. We have one language, one culture, one book, one religion and that’s it,’” she says. “And in many countries now it’s like that. In France if you want to teach Arabic, you have people from the extreme right saying, ‘No, we shouldn’t teach Arabic because Arabic is the language of Islamists and if we teach Arabic in school, people are going to read the Quran.’ We have to stop this ideology-isation of languages.”

When, in November 2018, Macron expressed sympathy with a military veteran’s concerns about “the undocumented”, Slimani was moved to write a piece in Le Monde arguing that the president should have spoken up for immigrants. She recalled in an event last year that after winning the Prix Goncourt she was aware of people commenting on her ethnicity, saying “see – they are replacing us”.

Despite being a representative of France, Slimani says she does not “have a nationalistic feeling. I think that I’m a person who has no identity.” Regardless of race, religion or nationality, she says she meets women all over the world who feel the same things about sex, motherhood and desire. “That is what I care about,” she tells me.

I ask Slimani what she thinks Adèle is about. “Loneliness. The impossibility to share with others your anxiety, your feeling of void.” And Lullaby? “Exactly the same. Loneliness. Louise is so lonely. And she’s so unable to say ‘Please help me, save me.’ I think that at the end of the day, we’re all alone. All we do – meeting people and falling in love and having children – is to avoid looking at the fact that we are alone.”

Slimani’s work is informed more than anything by a love of ambiguity. “Literature is a place where ambiguity has a space, where it’s possible to live for days with a monster,” she says. “People, in real life, would say Adèle is a slut or that she’s a bad mother. But in a certain way my aim was that maybe, at the end of the book, people would like her. Or maybe have some empathy for her.”

“I think that, in life, it’s always more complex,” she says. “I hope that my readers will figure out that it’s really not that simple.”

“Adèle” by Leïla Slimani, translated by Sam Taylor, is published by Faber & Faber