The 71-year-old French director Claire Denis is pocket-sized, but then so is a grenade. Welcoming me into her London hotel room, where a single lamp provides the only resistance against the fading light, she gets straight down to business. First there is the English-language title of her latest film, Let the Sunshine In. “I’m very unhappy with it.” She wanted A Bright Sun In. There is scarcely time to point out to her that this brisk, playful movie, about a middle-aged Parisian artist (Juliette Binoche) searching for love, is undamaged by the mistranslation. Denis has moved on, and is pondering the post-screening Q&A session she’ll take part in later. “I hate Q&As! You see a film, you don’t want to ask questions. All those stupid explanations.” She touches her throat, still tender from an operation three weeks ago. “The doctor removed a virus.” Really? You mean a cyst, or a tumour? “No!” she says crossly. “A virus.” Then she softens: “It was like coral from the ocean.” There is an odd glint in her eye, fearful but unmistakably titillated.

That look is there in her work, too. No other living director, not even Pedro Almodóvar or Catherine Breillat, has quite her knack for untangling the mysteries of sexual desire, or the role played in it by gender, race and class. It is the warmth, inquisitiveness and mischief in her films that make them so seductive. She is not above being shocking, as she was in the revenge thriller Bastards, set in a world of sexual exploitation where unspeakable acts are committed with a corncob, or Trouble Every Day, in which horny vampires nip out for a bite after sex. She is at her best, though, in a gentler or more thoughtful register.

Two fine films at either end of her career have dissected the tensions between white colonialists and black Africans. Her 1988 debut, Chocolat, set in colonial Cameroon, drew on her own childhood as the daughter of a civil servant; the family moved around French West Africa before Denis returned in her teens to Paris, her birthplace, to finish her education. She revisited the subject in her 2010 drama White Material, starring Isabelle Huppert as the owner of a coffee plantation in an unnamed turbulent African country. Unable to see that she is part of the problem, she continues making coffee while the nation burns.

Denis’s favourite among her films might be 35 Shots of Rum, an elliptical study of people of African descent living in a Parisian suburb. She retracts the remark. “I don’t have a favourite. Which is yours? Tell me.” That’s easy. Beau Travail (1999) which transposes Billy Budd (both the Melville novel and the Benjamin Britten opera) to a Foreign Legion post in Djibouti. Like much of her work, it has little dialogue. Why give an actor a monologue when character can be more elegantly expressed in shots of him fastidiously ironing his uniform or hurling his body around an empty dancefloor to “The Rhythm of the Night” by Corona?

You can understand the error. Much of the fascination of Beau Travail stems from its unusual gender dynamic: it’s an intensely homoerotic reverie in which many of the core personnel (not just Denis but her cinematographer and editor) happen to be female. As far back as the 1996 Nénette et Boni, about a young pizza-seller smitten with a female baker, Denis was complicating the audience’s point-of-view. We hear the oversexed fellow recounting his breathless fantasies, most of which revolve around the things he wants to do to the buxom baker with his “big French stick”. What we see, however, is an extended shot of his bare torso, the camera admiring the magnificent slopes of his shoulders and the play of light on his mahogany skin. The desirer has become the desired.

As her latest film demonstrates, Denis is an equal opportunities sensualist. Let the Sunshine In, wordier than we have come to expect from her, is an unabashed celebration of Binoche. “What brings everything together is Juliette’s frankness and strength. We were having lunch one day and I caught a glimpse of her cleavage. I said, ‘Juliette, I want to show what a sexy woman you are. Every shot in the film I am going to show your cleavage. Your legs, your feet, your hands, a short skirt, high heels, leather jacket.’ She is sexier than any young girl on the red carpet.”

Denis, too, is wearing a leather jacket. Her vanilla hair is full of kinks, her tiny buttonhole eyes darting and alert. She sniffs the air. “Am I dreaming or can I smell a joint?” She squints at the window, which looks out onto a dingy Soho back-street, and inhales deeply. “Such a nice smell…”

I steer her back to Binoche. The pair went straight from finishing Let the Sunshine In to their next collaboration, the intimate intergalactic story High Life, which is exactly the way Denis likes it. She can’t bear letting go of her actors. “In life I am maybe not possessive enough. But in film – so much.” Directing Huppert in White Material, she was forever touching the actor’s hair, petting her almost, telling her: “I want to take you home with me.” She hates it when someone she has worked with appears in another director’s movie. “I get jealous. You spend two months looking so closely at them that you can tell if a single eyelash is out of place. Then they are gone.” 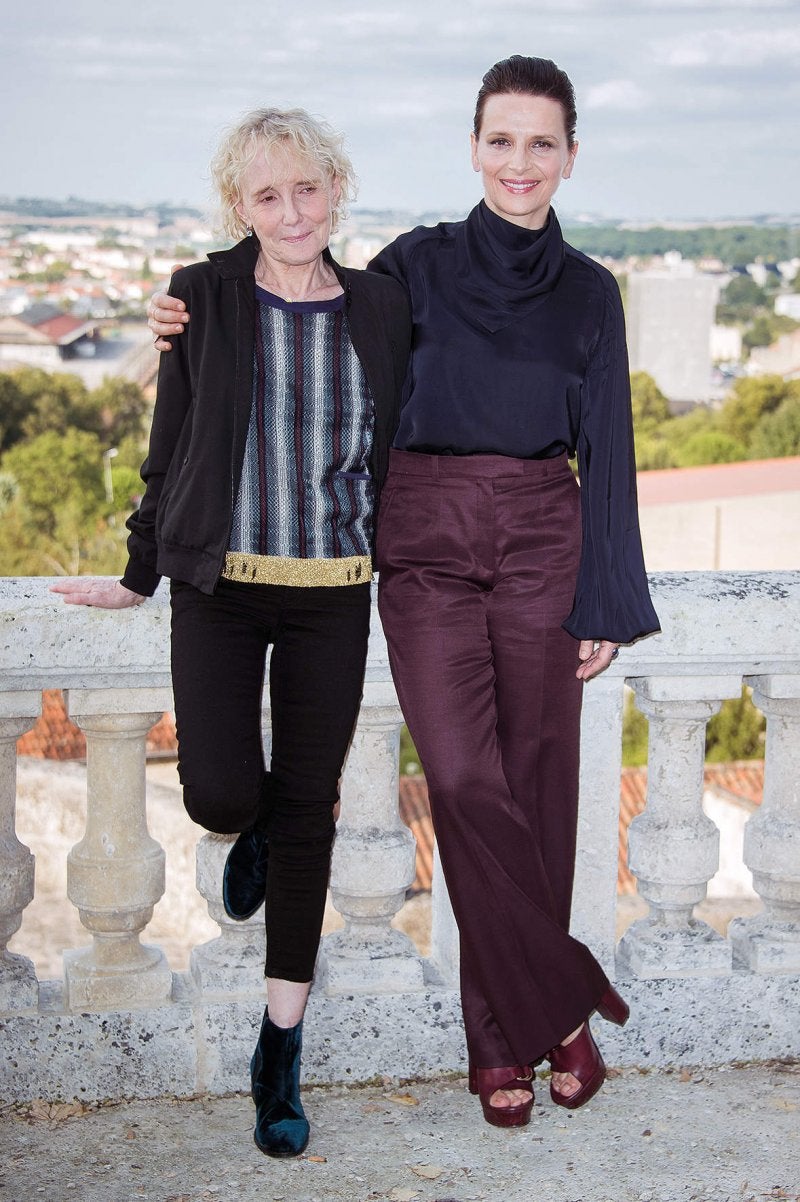 High Life, Denis’s first movie in English as well as her first with special effects, throws her together with another cinematic phenomenon – the actor Robert Pattinson, currently doing a bang-up job of distancing himself from the Twilight series that made his name. Pattinson, a long-time Denis fan, has called High Life her “craziest” film and described the director as a “punk”. She looks aghast. “My craziest? No. His, maybe. Well, there is some craziness in it but I won’t tell you where. Yes, Robert said many times he was afraid because I was like a punk. I am a simple person. I just try to communicate simply.” High Life also brought her into the orbit of Zadie Smith and her husband Nick Laird. “They didn’t write anything,” she explains. “I met with them because I wanted more than just a translation of the French script. But they felt there was no space for their own vision.” (At the time of writing, Smith and Laird are still listed as its co-writers on IMDb and Wikipedia.) The movie will feature music by the British band Tindersticks, whose frontman, Stuart Staples, has been working with Denis on and off for years. My suggestion that their gorgeous scores are the glue between her movies prompts her angriest objection yet.

“Glue? No, it is not glue! Glue holds things together. Music is there to be like the soul.”

I say that I meant it in the same way that Nino Rota’s music connects Fellini’s films.

She sits back in her chair, eyeing me suspiciously. “Hmm. I will ask Stuart. But it is maybe a little bit pretentious.”

What we can agree on is that Let the Sunshine In explores a subject overlooked by most cinema: the role of love and sex in the lives of older women. While Denis was shooting the film, her mother died at the age of 94. “She was very clear-minded, still interested in sex and attraction.” One night, she fell out of bed and Denis had to enlist a strapping young Italian from a nearby pizza joint – it could be a scene from one of her films – to come to the rescue. He scooped the old woman up in his arms and slipped her back into bed as though sliding a pizza into the oven. “Once he was gone, my mother looked up and said, ‘He was so good-looking!’”

Is it harder for women to express their sexuality as they get older? Denis thinks not. “It is worse sometimes for men. They are so afraid to not get a hard-on.” We can always use Viagra, I suggest. She scoffs. “That’s no fun. Better that I use a piece of wood or buy a sex toy. I think it’s humiliating for a man to take Viagra. It’s so good to be together as a couple and both of you can feel the hard-on going and coming back and going again. The smell of sex coming in, coming out.”

She has been married once and is now divorced. The ring she wears was given to her by “the man I live with. The man I love.” They have no children. “I decided at 39 I didn’t want to be a mother. No regrets, no crying. Maybe because my own mother was not so happy to be one. She told me, ‘You don’t need to be a mother!’ She was so free.”

Only when she sees a photograph of herself does Denis realise she is ageing. “Inside, not at all.” I ask if she notices that she is treated any differently now she is 71. “Sometimes when I’m walking or riding my bicycle, I’ll hear a guy whistle and then he passes me and sees my face and says, ‘Oh, sorry!’” She laughs. “Maybe from the back I’m better.” And is she happy? “With getting older? It’s a disaster. It’s a wreck. To be able to stay up for three nights without sleep, to get so drunk you are in a coma – these things I miss the most. On the other hand, my body is able to move, I still have feelings and I’m making films.”

She has to prepare for the dreaded Q&A now. The PR assistant hovers nearby. “I overheard something about joints and Viagra,” he says. “Claire, were you incriminating yourself?”

She jabs a finger in my direction like a scolded child trying to shift the blame. “He kept asking me, ‘Is it sad to be an old woman?’”

I protest that this wasn’t quite how I phrased it. “You raised the question many times,” she says, sniggering naughtily.

“Well, you’re not so young either. And you will suffer, too.” She takes my hand in hers, which is warm and firm, and musters her sweetest smile. “So fuck you,” she says.

Let The Sunshine In is released on 20 April

This article appears in the 18 Apr 2018 issue of the New Statesman, Enoch Powell’s revenge