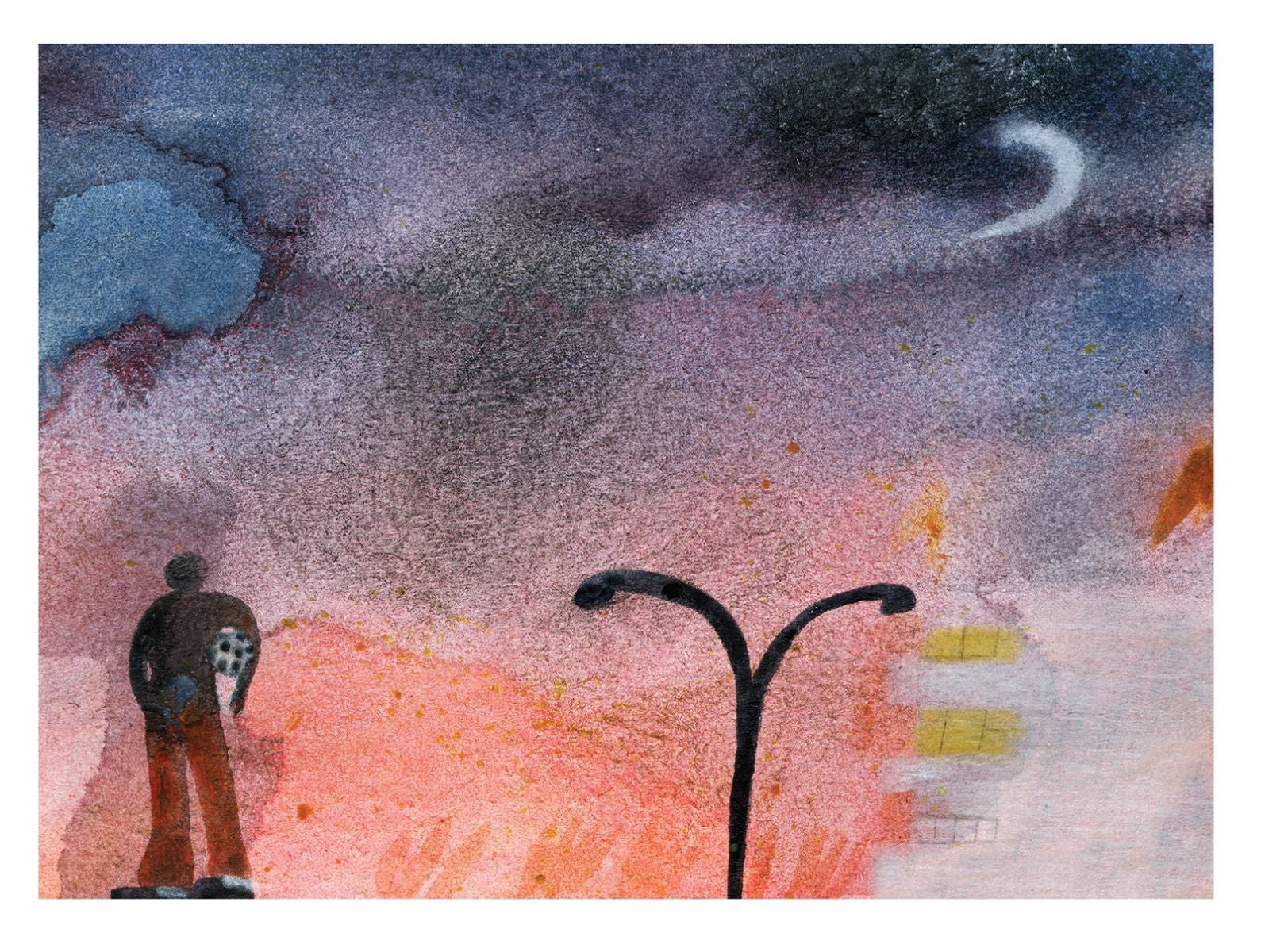 Spring came to the housing dev­elopment, and with it came lightness: one day I put on my new sneakers, and to run out in them, after having stomped around in boots and heavy winter shoes for six months, felt pretty much like flying. The quilted trousers and down jackets which made all movement so cumbersome and ungainly were replaced by light trousers and jackets. Mittens, scarves and caps were put away. Skis and skates and sleds and toboggans were stored in basements and garages, bicycles and footballs were brought out, and the sun, which had hung low in the sky for so long, and whose rays had then been only for the eye, rose higher and higher, and soon became so warm that the jackets we put on in the morning had been stuffed into our backpacks by the time we came home from school at midday.

But the greatest sign of spring of all was the smell of burning grass that spread all over the housing development during these weeks. The cool evenings, the bluish dark, the cold which rose from the ditches that were still filled with snowdrifts, hard as ice and with gravel embedded in them, the steady hum of children’s voices, playing outside, some running after a ball on the road, others bicycling up and down ditches or rearing up on the sidewalk, all of them bubbling with life and lightness, for you were suddenly free to run, to bicycle, to shout, to laugh, and always in your nostrils there was the stinging yet rich smell of last year’s withered grass burning, which was suddenly everywhere. Once in a while we would run up and watch; the low, dense flames resembled orange waves, almost moist in the intensity of colour brought on by the evening dusk, guarded by a proud mother or father, often with the handle of a rake over their shoulder and gloves on their hands, like an order of knights of the lower middle class.

What was it about fire?

In every shade of yellow and red, it stretched towards the sky, devoured crackling branches of pine, melted sputtering plastic, flared up here, then there, in completely unpredictable patterns, as beautiful as they were incredible, for what were they doing here, in our midst, among ordinary Norwegians on these ordinary 1970s evenings?

Another world appeared with the fire, and vanished with it. It was the world of water and air, earth and mountain, sun and stars, clouds and sky, the ancient world which was always there and always had been, and which one never thought about. But fire came, you could see it. And once you had seen it, you couldn’t help seeing it everywhere, in all fireplaces and ovens, in all factories and manufacturing plants, and in all the cars driving around on the roads, parked in garages or outside the houses in the evenings, for the fire burned in them, too. Even the cars were deeply archaic.

This vast age was really in everything, from the houses, which were of brick or wood, to the water which flowed in and out of them through pipes, but since everything happens as if for the first time with every generation, and since this generation had broken with the preceding one, this had been pushed to the back of consciousness, if it was there at all, for in our minds we were not just modern 1970s people, but our surroundings were modern 1970s surroundings. And our emotions, the feelings which coursed through every one of us in the neighbourhood on these spring evenings, were modern emotions. And for us, being children, that meant no history. Everything happened for the first time. That even our feelings were old was something we never considered. Why would we? The feelings which flowed through our chests, which made us shout and scream, laugh and cry, were just us, the way we were, just as the fridge had a light that lit up when the door was opened, or the houses had doorbells which rang when someone pressed the button.

Forty years later I sit here watching the arrival of another spring. Outside the window the lawn is green, in the flower beds thick, juicy tulip and lily-of-the-valley leaves are sprouting, and the trees are full of hard buds ready to unfold on the first warm day. Spring arrives, but it no longer brings any secrets, no longer holds any surprise, it unfolds mechanically, the thick covering of pale blue flowers spreading under the pear tree spread there last year too, and the year before, and the year before that. And the last time I experienced a new emotion, the last time I had a feeling I had never had before, was in 1985, when I was 16. It is while we are children and youths that we are wide open to the world, that is when we take in everything in it greedily, and what we gain and experience then, what we see and feel then, is something we spend the rest of our lives administering. But once in a while something manages to pierce this familiarity, to rip it open, as it were, and suddenly we see the world as it is in itself, mysterious, alien, mute. This is what used to be called the sublime, what Joyce called the epiphanic, and we all know it: how the moment suddenly has a weight of its own, and seems to tear itself loose from all other moments, so that an almost wild sensation of being right here, right now, arises.

It is a revelation. In the Bible, revelation often comes in the shape of fire, which is not so strange, since both the sacred and fire appear suddenly, perfect and immutable, and just as suddenly vanish.

On the final day of April last year, I was standing with maybe 40 other people out in a field in the far south of Sweden, under a starlit sky, facing an enormous bonfire. It was Walpurgis Night, which in Sweden means that people gather around bonfires throughout the country and sing in welcome of spring. The archaic nature of this ritual, which seems almost pagan, should be an impossibility in Sweden, which is perhaps the most politically correct and progressive country in the world, but there we stood, facing the crackling and booming fire, which flung flames and smoke and little black particles into the black sky, while our children ran around excited and out of breath, shouting and screaming and laughing, for spring had arrived, filled with lightness, light and a flood of unaccustomed emotions.

I stood in a line to buy them hot dogs and sodas, it was cold, and the trivial look of the ketchup and mustard bottles, the limp hot dogs, the folding table on which the soda bottles had been ranged, gave me a feeling of standing in a banal world and looking into a magical one, as if our lives are played out on the border between two parallel universes. That we begin in the magical, the world of bonfires and stars, the boisterous and entrancing world of spring, but without realising it, since there is no time with which to measure in it, and gradually slip into the world of limp hot dogs and rickety folding tables, where we settle down, and now and again, aided by bonfires and poetry, gaze into the unchanging, where the return of spring and the blanket of blue flowers under the pear tree is a revelation.

Written for the New Statesman, this essay was translated from the Norwegian by Ingvild Burkey