In July composer Judith Weir was named as the first woman to hold the post of Master of the Queen’s Music, following in the footsteps of dozens of eminent male musicians with the same title. The Guardian reported that “the palace never even suggested ‘mistress’ of the Queen’s music and neither did she”.

When the role Master of the King’s Music was created in 1626, the words master and mistress were direct equivalents. Today mistress carries multiple connotations, one of which the Daily Mail alluded to in a headline before the announcement asking if Weir might be the Queen’s first Music Mistress.

Research by Cambridge University historian Dr Amy Erickson, published in the autumn issue of History Workshop Journal, unravels the complex history of an extraordinarily slippery word and suggests that the title of Mrs, pronounced “mistress”, was for centuries applied to all adult women of higher social status, whether married or not.

Erickson’s inquiries into forms of female address emerged from her study of women’s employment before the advent of the national census in 1801. What she found in registers, records and archives led her to question existing assumptions and track the changes that have taken place in the history of titles.

She says: “Few people realise that ‘Mistress’ is the root word of both of the abbreviations ‘Mrs’ and ‘Miss’, just as Mr is an abbreviation of ‘Master’. The ways that words derived from Mistress have developed their own meanings is quite fascinating and shifts in these meanings can tell us a lot about the changing status of women in society, at home and in the workplace.”

Throughout history “mistress” was a term with a multiplicity of meanings, like so many forms of female address. In his Dictionary of 1755, Samuel Johnson defined mistress as: “1. A woman who governs; correlative to subject or servant; 2 A woman skilled in anything; 3. A woman teacher; 4. A woman beloved and courted; 5. A term of contemptuous address; 6. A whore or concubine.”

Neither “mistress” nor “Mrs” bore any marital connotation whatsoever for Dr Johnson. When in 1784 he wrote about having dinner with his friends “Mrs Carter, Miss Hannah More and Miss Fanny Burney”, all three women were unmarried. Elizabeth Carter, a distinguished scholar and lifelong friend of Johnson’s, was his own age and was invariably known as Mrs Carter; Hannah More and Fanny Burney were much younger and used the new style Miss.

Erickson’s investigations have revealed that “Miss” was adopted by adult women for the first time in the middle of the 18th century. Before that, Miss was only used for girls, in the way that Master is only ever (today increasingly rarely) used for boys. To refer to an adult woman as a “Miss” was to imply she was a prostitute.

She explains: “Until the 19th century, most women did not have any prefix before their name. Mrs and, later, Miss were both restricted to those of higher social standing. Women on the bottom rungs of the social scale were addressed simply by their names. Thus, in a large household the housekeeper might be Mrs Green, while the scullery maid was simply Molly and the woman who came in to do the laundry was Tom Black’s wife or Betty Black.

“Historians have long known that Mrs indicated social status, but they normally assume it also shows that the woman was married. So they have wrongly concluded that women like Johnson’s friend Elizabeth Carter were addressed as Mrs as an acknowledgement of distinction, to grant them the same status as a married woman.”

Erickson suggests that this interpretation is mistaken. “Mrs was the exact equivalent of Mr. Either term described a person who governed servants or apprentices, in Johnson’s terms – we might say a person with capital. Once we adopt Johnson’s understanding of the term (which was how it was used in the 18th century), it becomes clear that ‘Mrs’ was more likely to indicate a businesswoman than a married woman. So the women who took membership of the London Companies in the 18th century, all of whom were single and many of whom were involved in luxury trades, were invariably known as ‘Mrs’, as the men were ‘Mr’. Literally, they were masters and mistresses of their trades.” 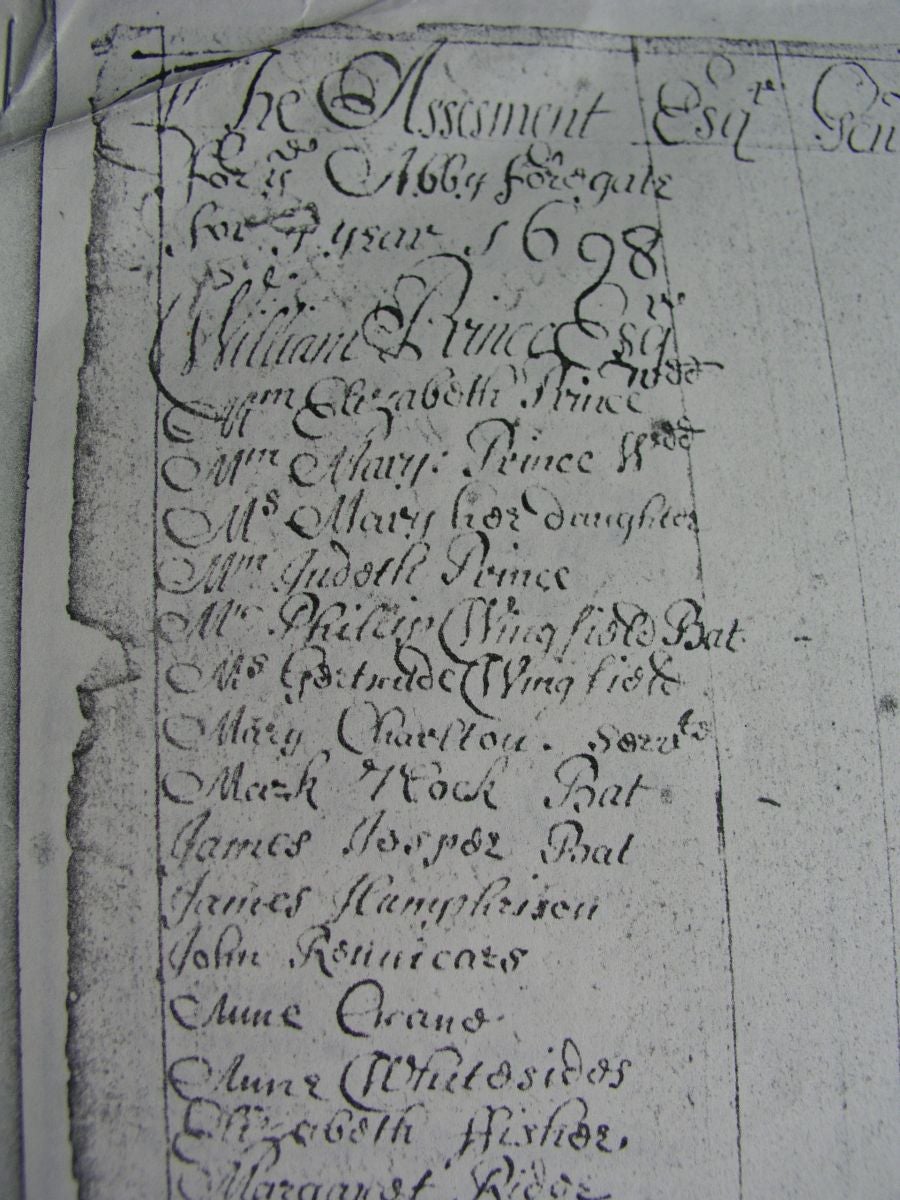 This 1698 tax list from Shrewsbury records the most prominent persons in the district first: William Prince Esqr, Mm [Madam] Elizabeth Prince Wdd [widow], Mm Mary Prince Wdd, Ms [mistress] Mary her daughter, Mm Judeth Prince, Mr Philip Wingfield, and Ms Gertrude Wingfield [who is either the wife or the sister or the daughter of Mr Wingfield above]. The women who follow are recorded only by their first and last name, with no prefix. Ms is used here for an unmarried women (Mary Prince) and for a woman whose marital status is unspecified (Gertrude Wingfield). Madam appears to be used here for married or widowed women of social standing.

Historians have often misidentified women as married because they were addressed as “Mrs” – when they were actually single. “It’s easy enough to identify the marital status of a prominent woman, or those taking the Freedom of the City of London (since they had to be single),” says Erickson. “But it’s much harder to identify whether those women described as Mrs in a parish listing of households were ever married – especially the ones with common names like Joan Smith.”

Erickson’s research into the 1793 parish listing for the Essex market town of Bocking shows that 25 heads of household were described as Mrs. She says: “Female household heads were by definition either single or widowed and, if Bocking was typical of other communities, around half of them would have been widows, and the other half single. But two thirds of these women in Bocking were specified as farmers or business proprietors. So Mrs is more reliably being used to identify women with capital, than to identify marital status. Only one woman was Miss: the schoolmistress.”

It seems that it was not society’s desire to mark either a woman’s availability for marriage (in the case of ‘Miss’), or to mark the socially superior status of marriage (‘Mrs’) which led to the use of titles to distinguish female marital status. Rather, socially ambitious young single women used ‘Miss’ as a means to identify their gentility, as distinct from the mere businesswoman or upper servant.

This trend was probably fuelled by the novels of the 1740s such as those by Samuel Richardson, Henry Fielding and Sarah Fielding, which featured young gentry Misses and upper (single) servants titled Mrs. The boundaries between the old and new styles are blurred, but Mrs did not definitively signify a married woman until around 1900.

In the course of her research, Erickson has also looked at the way in which from the early 19th century married women acquired their husband’s full name – as in Mrs John Dashwood (Jane Austen’s Sense & Sensibility, 1811). Austen used this technique to establish seniority among women who shared the same surname. England in the early 19th century was the only place in Europe where a woman took her husband’s surname.

To many women in the late 20th century, the practice of replacing her first name by his first name added insult to injury. That’s why this form of address was satirised as “Mrs Man”, and why it has dropped out of use in all but the most socially conservative circles – except of course where a couple are addressed jointly. The introduction of Ms as a neutral alternative to “Miss” or “Mrs”, and the direct equivalent of “Mr”, was proposed as early as 1901.

“‘Those who objected to ‘Miss’ and ‘Mrs’ argue that they define a woman by which man she belongs to. If a woman is ‘Miss’, it is her father; if she is addressed as ‘Mrs’, she belongs to her husband,” says Erickson. “It’s curious that the use of Ms is often criticised today as not ‘standing for’ anything. In fact, it has an impeccable historical pedigree since it was one of several abbreviations for Mistress in the 17th and 18th centuries, and effectively represents a return to the state which prevailed for some 300 years with the use of Mrs for adult women – only now it applies to everyone and not just the social elite.”

The question of which titles are appropriate for which women is likely to remain hotly contested. In 2012 the mayor of Cesson-Sevigne, a town in France, banned the use of “mademoiselle” (the French equivalent of “Miss”), in favour of madame (the equivalent of “Mrs”), which would be applied to all women, whether married or not, and regardless of age. The proposal has not met with universal favour. Some women protested that calling an adult woman “mademoiselle” was a compliment.

Dr Amy Erickson’s paper, “Mistresses and Marriage”, is published in the autumn 2014 issue of History Workshop Journal. Her research on this topic is one thread of a much larger University of Cambridge project that will eventually reconstruct the occupational structure of Britain from the late medieval period to the 19th century.