“To live, to err, to fall, to triumph, to recreate life out of life” – what a fitting sentiment to accompany the birth of a new organism. It’s a quotation from James Joyce’s Portrait of the Artist as a Young Man, and came as part and parcel with the creation of the first synthetic cell in 2010. Synthia – as it became known – was constructed by the scientist Craig Venter, who assembled its genetic code in a computer, and wheedled it into the chassis of an eviscerated cell, whereupon it became alive. The quotation, along with two others also encrypted in DNA, was buried in its genome.

Life itself is encrypted. DNA is the code – a set of instructions on how to build an organism. The work of cracking the genetic code in the 1960s was to understand the encryption of life. It did just that, as we now understand not just how genes work in living things, but how the rusting codes in our genomes betray our evolutionary history. Genes that were once vital are no longer, but leave coded shadows in our DNA.

Venter’s project was steganography – the art of hiding messages within another work. His motivation, I suspect, was partly hubris, but ostensibly to watermark the genome as manmade. But it comes from a long, fun, and seriously nerdy tradition that covers pretty much every cultural form. These messages are now more commonly known as Easter eggs, primarily from the hunts devised by programmers hiding treats in software. Many of us remember the excitement of discovering “the Hall of Tortured Souls” – a 3D adventure encoded by a disgruntled employee in Microsoft’s fairly rubbish Excel 95 spreadsheet, only accessible via a code in a particular cell. Video games are crammed with Easter eggs, and the race to find them is now standard practice. It suits the medium so well because the code itself is largely invisible and impenetrable to the user.

Easter eggs in music are legendary, frequently recorded backwards, or “backmasked”. The Beatles did it, Pink Floyd too. Play Jay Z’s track “Lucifer” backwards, and it may well say “666, murder murder Jesus”. Some satanic, some godly, these messages are mostly plain silly, but none more so than Ozzy Osborne’s on his track “Bloodbath in Paradise”, openly – secretly – mocking the devilish decrees of his metal brethren: “Your mother sells whelks in Hull.”

In books, recall, if you can, Kit Williams and his beautiful Masquerade. Published in 1979, every page contained a clue to the location of an 18-carat golden hare, which was buried under the shadow cast by a crucifix at midday on the autumn equinox. Novelist Ernie Cline launched a modern quest in his wickedly fun 2009 book Ready Player One – a tale of a global hunt to find three Easter eggs hidden in a huge future online world, the prize being ownership of the mega-billion dollar company. It’s irresistible to us of a certain age and geekiness, as the book is littered with references to 1980s video games and films such as Ghostbusters and Back to the Future. But what no one knew was that there was a real hunt in the book itself. It was claimed in 2011 – the prize: a Delorean.

In cinema, the practice is rife too. Each movie from the animation studio Pixar hides a character from their next film. The Toy Story films are weirdly laden with references to Stanley Kubrick’s horror The Shining, from the creepy iconic 1970s carpet, to the apposite name of a security camera in the Toy Story 3 – Overlook 237 – a reference to the Hotel, and its spookiest room. Even film posters are not immune to steganography. The one-sheet for Silence of the Lambs features the image of a skull on the back of a death’s head moth covering Jodie Foster’s mouth. Look carefully and you’ll see it’s actually composed of naked women – as indeed are the irises of the classic jazz-age cover of The Great Gatsby. 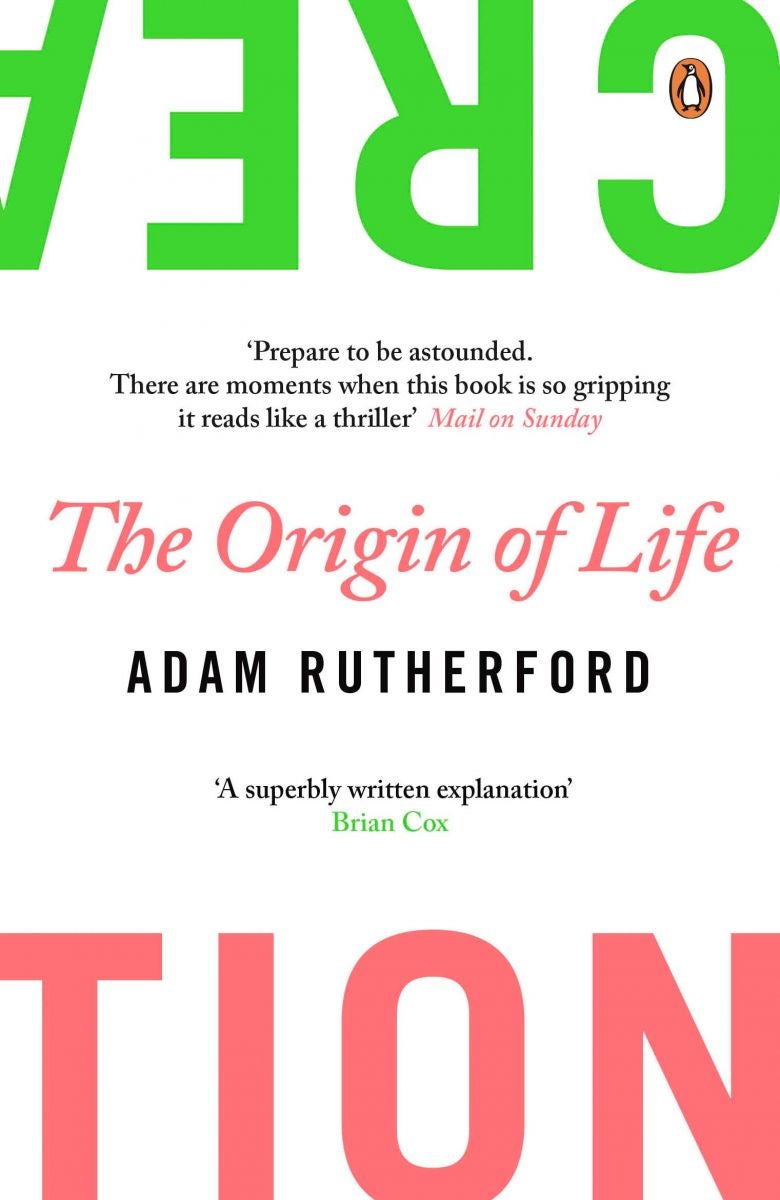 Books, DNA, films and Easter eggs: these are some of my favourite things. Which brings us to my book Creation. It was published in 2013, about the parallel sciences of origin of life research, and genetic engineering. I, like plenty of film nerds, have good recall for lines from movies. Simply for my own amusement, I always hide them in scripts, articles and books. Mostly these go unnoticed. Mostly. Creation has plenty, 20 at last count, some explicit, some merely a reference or paraphrase. In doing so, I had inadvertently hidden Easter eggs in a book in which I describe DNA Easter eggs. And thus the game was afoot. Creation is a book in two halves, and its gimmick is that both halves have their own cover, and are inverted, so you can read each from either direction. Many people asked me what happens in the middle of the paperback, to which the answer was, it contains the following text:

Using a standard DNA cipher described in the book revealed that that code spelt out this:

The encryption I used doesn’t have O or U in it, but, my presumption was that anyone sharp enough to translate it would spot the full stop ‘CREATI.N’ stood in for an O, and the V in PENGVIN stood in for a U, and thus realise that it is an email address. We put it out on Twitter, and the first email arrived an hour later. The people who wrote to it were directed to a website, which contained a video. That film was a mock of the denouement of the Usual Suspects, in which (spoiler alert) the plot is revealed to be almost entirely unreliable by clues on a notice board. In my appallingly acted version, the instructions were given to hunt down my own watermarks, homages, and games: three quotations buried in the text.

A week later, four winners had all claimed their prizes, a stack of books from Penguin. They all found a line from “Life on Mars” by David Bowie. Two identified a made-up word from The Simpsons, and one a made-up creature from The Princess Bride. But in total the winners only found eight. The official hunt is over, but can you do better? Start at the very beginning. It’s a very good place to start.

Adam Rutherford is a geneticist, author and broadcaster. He hosts the BBC Radio 4 programme Inside Science. His writing includes Creation: The Origin of Life / The Future of Life (2014) and How to Argue with a Racist (2020).