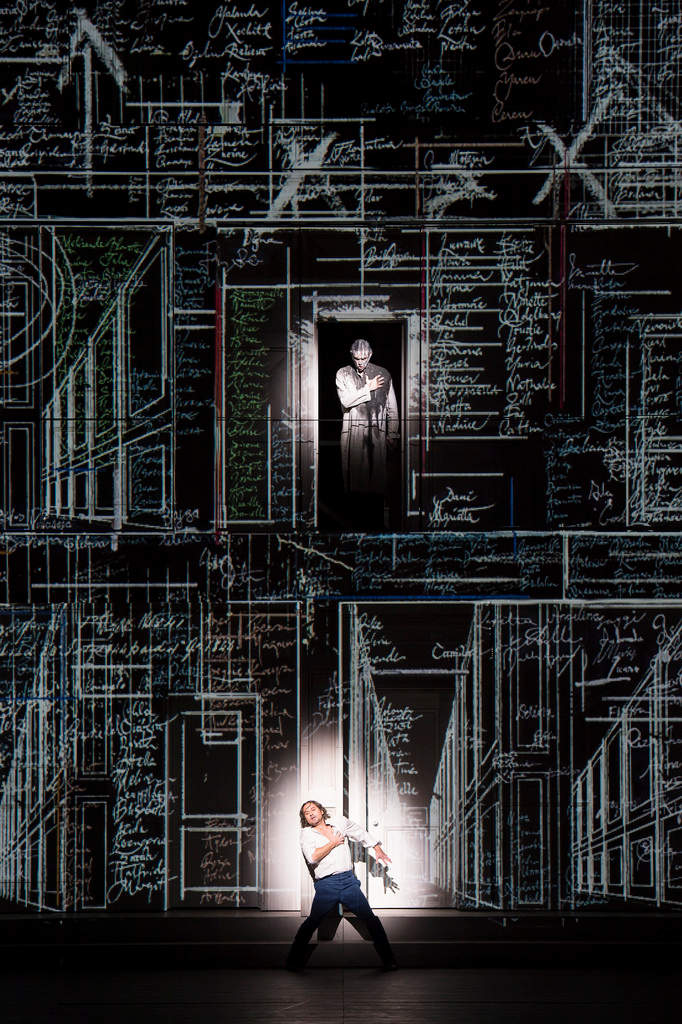 Don Juan or Don Giovanni, Jack Tanner or Don Jon: the legendary seducer and libertine remains a powerful psychological cipher, whether reinvented by Molière and Patrick Marber, Pushkin or the Pet Shop Boys. Kasper Holten’s new production for the Royal Opera House attempts a bold re-write of the myth, holding a mirror up to a society in which “selfie” was declared the 2013 Oxford Dictionaries Word of the Year.

The curtain rises on Es Devlin’s clean, classical designs. But just as Mozart’s music sets aside solemnity for wriggling quavers, so this white facade starts to boil with life. Cleverly conjured by Luke Halls’s video projections, invisible quills scrawl graffiti, covering the blank walls with Leporello’s list of his master’s conquests. It’s the start of a long evening of visual trickery that makes singers disappear even as you watch them and transforms windows into whirling vortexes and an ordinary house into an Escher illusion.

Reality, it seems, is subjective. A telltale ink blot spreading outwards from the centre of Donna Anna’s dress and the delicate patterns on Donna Elvira’s robes reveal themselves as the quill-strokes of the opening scene – and it becomes clear that this is Don Giovanni rewritten by the Don. History may be written by the victors but Holten gives literature’s greatest loser, condemned again and again to hellfire, the opportunity to tell his tale – and what a tale it is.

Far from being a rapist and violator, Giovanni, here played by Mariusz Kwiecien, is the victim of hypocritical women, who lead him on even as they cry abuse. Donna Anna clings desperately to a departing Giovanni before launching into a version of “Fuggi, crudele, fuggi” that is more reproach than accusation. Later, she slips out, even as Ottavio sings of his love in “Dalla sua pace”, for another encounter with the Don. Zerlina, too, discovered in a compromising embrace on her wedding day, tears at her own clothes – creating the fiction of a violation where none occurred.

There has been much debate about rape recently. To give control of a rape narrative to a male aggressor risks making a mockery of the current artistic preoccupation with voicing the unvoiced. Does Giovanni’s side of the story need telling? Does he deserve his time in the operatic witness stand? Which side the production is on, morally, depends on the ending.

Fortunately, Holten triumphs here. In a sleight of hand more striking than the visual pyrotechnics, he suddenly banishes them all. Hell is not death, or a descent into baroque demons and flames, but simply the end of illusion. Thrust back into a solitary reality, with the house lights rising, Giovanni can only reach desperately out to the audience in the hope that they might indulge him in one final chapter. Purists will object to the musical cuts to this last scene but the truncated resolution is the only possible ending for an opera that is all about the Don, in which other characters are mere projections and fantasies.

Conceptually this is as interesting a Don Giovanni as we’ve seen in years. In execution, however, there are some issues. The visuals offer spectacle where psychological intimacy would be more appropriate. Even such powerful singing actors as Kwiecien and Véronique Gens, who plays Elvira, get lost among it all. Humour is drained from the drama by a quirky, strangely jazzy fortepiano continuo – a leaden musical gag that misses the punchline each time – while in scenes begging for laughter, Holten seems to have gone out of his way to avoid it.

The speed from Nicola Luisotti’s pit is uneven, too often rushing forwards and treading moments of delicacy and humour underfoot. Zerlina’s charmingly manipulative “Batti, batti” is a casualty, as is the Don’s serenade. The casting also yields problems, with Malin Byström struggling to contain her voice in the repressed frame of Donna Anna and the tenor Antonio Poli making heavy weather of her lover Don Ottavio. But through it all, Kwiecien’s charisma burns hell-hot. The Polish baritone carries a tricky concept by sheer force of personality, aided by the smoothest of vocal seductions.

After making his Royal Opera House debut with a staging of Eugene Onegin that took a beating from critics, Holten would have been forgiven for playing it safe with his second production. Yet Don Giovanni is a defiant, double-or-nothing bet: a flawed show but more interesting, thought-provoking and appealing than anything I have seen from this company in a long time.