Ours is a story exposing the absolute loss of democracy in British urban space: what the British public is allowed and not allowed to see in the streets. We’re talking about images.

Our photomontage “Photo Op” depicting Tony Blair taking a “selfie” in front of a burning oil field has just gone on show at Catalyst – the first major exhibition at the Imperial War Museum’s (IWM) national contemporary art collection in Manchester.

Over the last seven years, the image has been shown at Tate Britain, at Banksy’s Santa’s Ghetto on Oxford Street and in numerous other exhibitions. It has been printed full-page in the Daily Telegraph, the Times, the Guardian and the Independent, has been bought by the National Galleries Scotland, the V&A and the Imperial War Museum for their collections, and used in numerous ways across print and online media globally. It’s even been used by the British Council in an exhibition of British art in New Delhi, India. 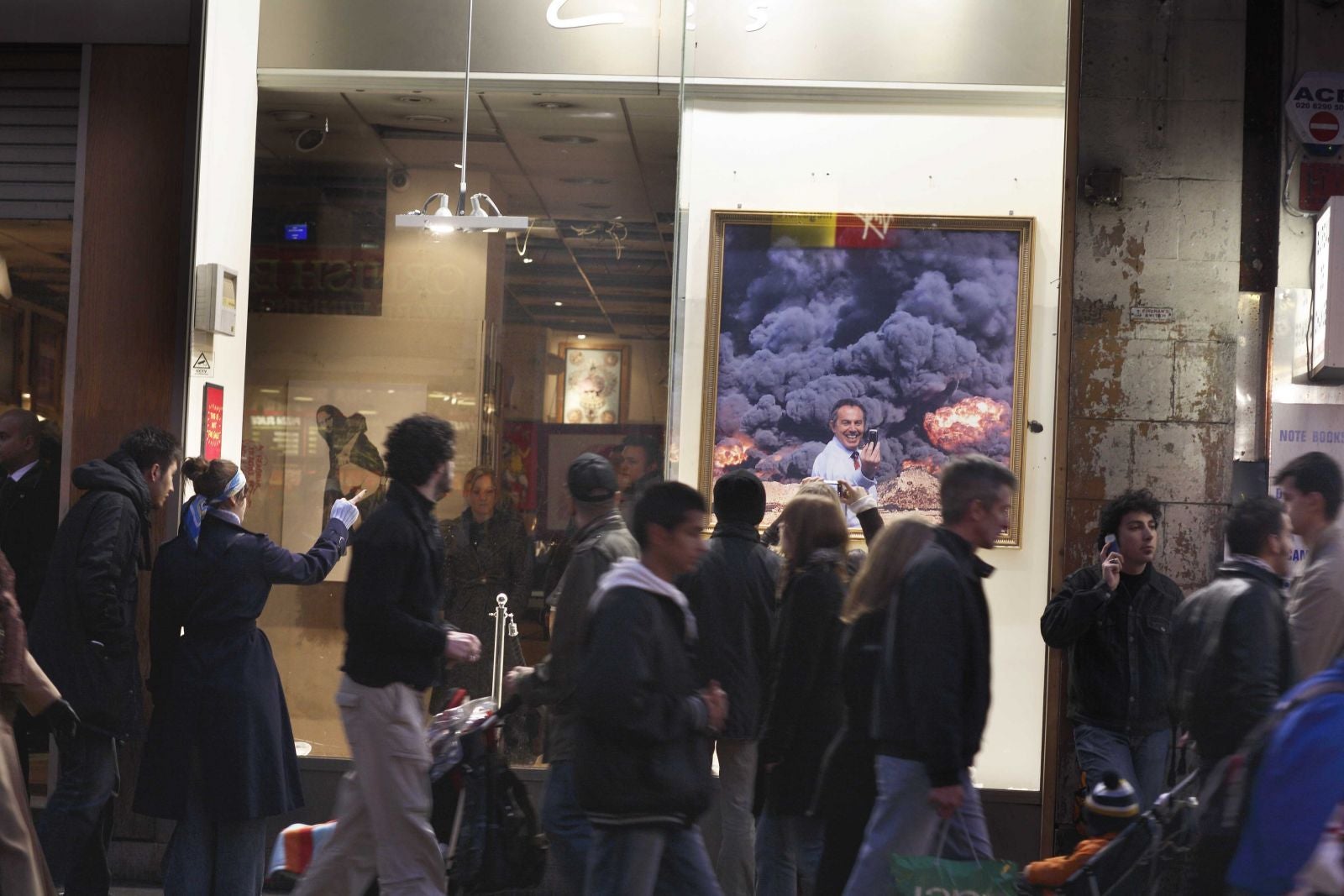 The IWM decided to use it as the lead image in a campaign to advertise their new exhibition. The adverts were to go on bus shelters and hoardings in and around Manchester. But it didn’t happen.

Shortly before the show opened, IWM informed us that the companies who own the advertising space, CBS Outdoor and JCDecaux, were refusing to allow the IWM to use the artwork in the advertising on any of their sites.

As they own the majority of the sites in Manchester (and according to a government report from 2011, 50-70 per cent of all the outdoor advertising sites in Britain), the IWM were forced to scrap the entire campaign (along with the Blair “selfie”), and choose an image more to the corporations’ liking.

The reason CBS gave to the IWM was that “they will not run anything ‘deemed to be political’ nor ‘involving explosions’ – on ‘public transport media'”. JCDecaux declined to give a reason and refused to reconsider.

CBS’s corporate interests stretch worldwide. Sexist and violent images sell products and are a mainstay of advertising across the companies’ many thousands of hoardings, buses and Underground stations. Currently showing on CBS adspace in the London Underground (all of whose advertising space is licensed to CBS) is a poster for Frederick Forsyth’s latest book, Kill List, which uncritically depicts a drone flying out of an explosion, firing a missile in the viewers’ direction. It runs with the strapline: “IDENTIFY. LOCATE. DESTROY.”

Try and show an artwork that is prophetically anti-war and has enjoyed huge public popularity, even within the context of a major new exhibition at the Imperial War Museum, and the message suddenly becomes anti-business. It doesn’t serve company profits.

Perhaps, CBS thought that major companies advertising their products might have subsidiary companies that manufacture weapons? We cannot know for sure. Better to cause no offence and certainly better not to offend Blair, the Middle East peace envoy (sic) and popular speaker at corporate functions.

Our work has been censored by a large corporation before.

In December 2003, we were asked to make an image symbolising “peace on earth” as part of a public event organised by Bob Geldof. The commissioned images were to be projected onto buildings around London – ours on Trinity House in the City of London. We made a photomontage based on a painting of the Virgin Mary in the National Gallery. We turned her halo into a peace symbol and her face into an image of the earth. The image evokes the position that we are far from a life of peace on earth while giving a locus for hope in both the CND symbol and the original painting itself.

Before any projection happened we were told that our image had been banned. Instead a photograph of Nigella Lawson’s mince pies was projected onto Trinity House. At that point we learned that Orange was the company financing and running the event. Following the controversy that followed the banning of our image, Niamh Byrne, head of Media Relations at Orange, wrote to the Guardian that Orange had decided “small children and grandparents would not appreciate” our image. The Orange mission statement reads: “We are ready to push boundaries and take risks, we are always open and honest, we say what we do and we do what we say, we want to make a difference to people’s lives”.

We title the work “Peace on Earth, banned by Orange”. 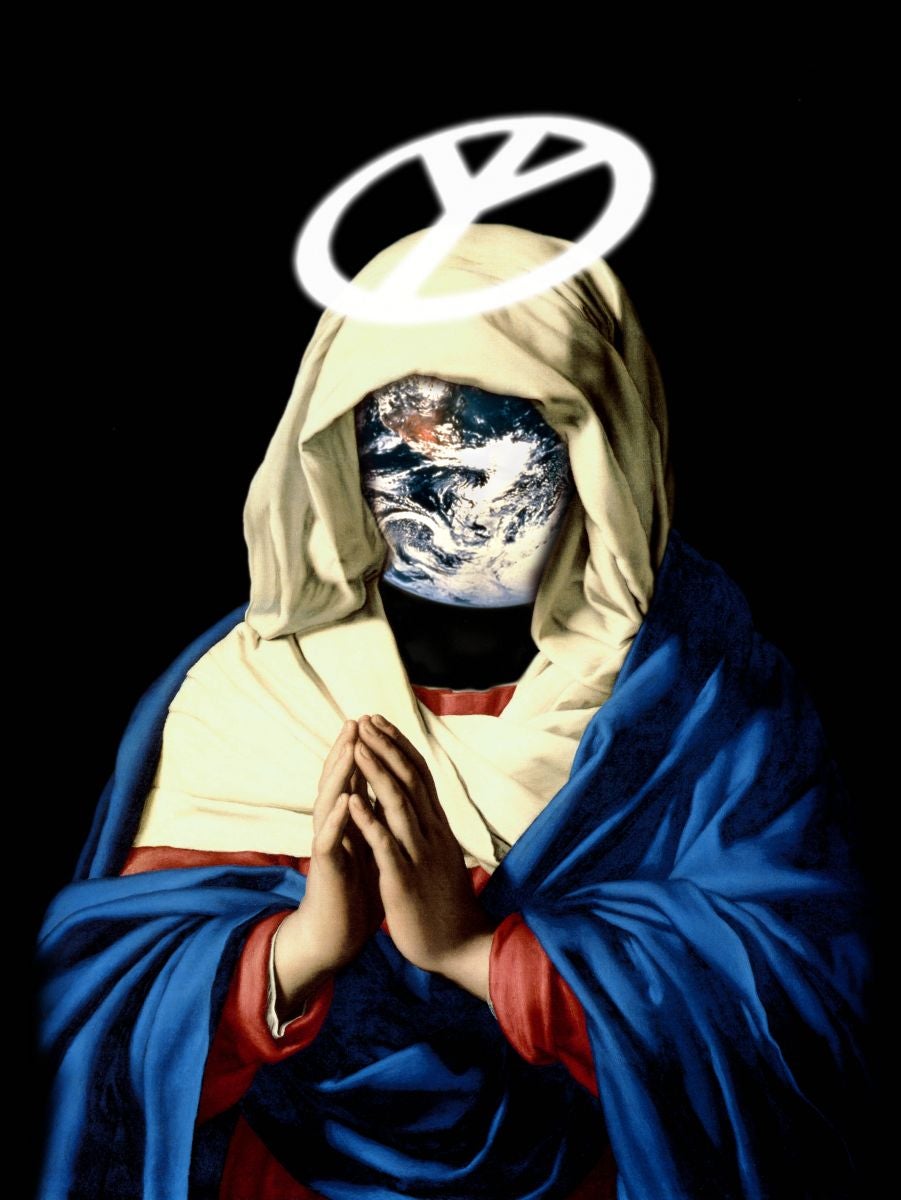 “Peace on Earth, banned by Orange” by kennardphillips.

Corporations whitewash their reputations by sponsoring the arts on the one hand and censoring art on the other. It is a commonplace that a corporation will only sponsor what it deems to be good for its image and business. Edgy is good for companies with a young demographic, but only so far – not to the point of an actual critique of our lords and masters, be they politicians or businessmen. Certainly nothing suggesting that peace might be worth more than war.

CBS is a corporate monolith that has powerful interests in politics and business (it is a major TV channel in the states, heavy in political content, as well as being a big player in the global entertainments industry), but the fact that CBS actually controls what we see on the posters in our so-called “public space” is less commonly known.

Artists are imprisoned all over the world for making work about injustice and for criticising their governments. In Britain the censorship of dissident artists appears benign, but is more insidious. The penalty is more likely to be that their work is marginalised rather than that their life is threatened. This can result in self-censorship rather than state censorship. Artists subconsciously know that there is an invisible line that must not be crossed if they want to want to make public art which, nowadays, is mainly sponsored by corporations.

Nearly every surface in all our public spaces has become a gallery for the corporate art of advertising. To participate in that public space as an artist you either have to be sponsored and pointless or put your hood up and work illegally.

The gagging bill is nearly on the statute books: an example of the government’s further attempt to curtail freedom of speech and public debate. But in the same way that CBS has censored our image for an exhibition at the Imperial War Museum (not exactly the most subversive institution in Britain) the bill surely shows that both our political and corporate masters are aware of the danger to their wealth and power from a global public with a desire for dissent.