It’s been 12 years since Michael Landy destroyed all his possessions, including many YBA works of art, in the old C&A store on Oxford Street. Now, at another disused venue down the road, you can see more clearly what Landy –who also features here – was getting at. While what came before and after sparks with creativity and subversion, the late 1990s were culturally burned out, if the ICA’s new show is anything to go by. I should know: 1997-2000 were the exact years I was a student in London. For a while, we were all dressed up with very few alternative places to go.
On the first floor of the former Selfridges Hotel, which now aptly resembles a warehouse space, this sprawling survey of the city’s subculture is made up of over 50 wooden vitrines, plus installation and video work. Like a 3D flow chart or family tree, it starts with post-punk in the early 1980s and meanders towards the present, connecting many events and tribes along the way. It covers art, design, fashion, music and nightlife, with each cabinet micro-curated by a different figure or group. Rather than conventional artwork, these contain found objects, club memorabilia, photos – like little visual biographies.
The overall curation is by Gregor Muir, director of the ICA, assisted by others including the DJ and scene legend Princess Julia. There is the sense that this is one particular journey – a canonical version of an underground, many of whose players have become “national treasures”. So, inevitably, there are weaker links in the chain and the occasional question over criteria (why include Zaha Hadid, for example, but not Donald Urquhart?) but the show doesn’t seek to be all-inclusive.
Perhaps because I wasn’t there, it’s the early material that excites me most: the 1980s eruption of flamboyant creatives that takes in Leigh Bowery, Derek Jarman, John Maybury, Boy George, Bodymap, Kinky Gerlinky and others. The first cabinet, which shows Nicola Tyson’s 1983 photos of “mudlarking” on the Thames riverbank, sets the tone. With its broken china and clay pipes, it epitomises a “hard times” DIY aesthetic and is both art installation and something more traditional – a showcase, a cabinet of curiosities, a shrine. 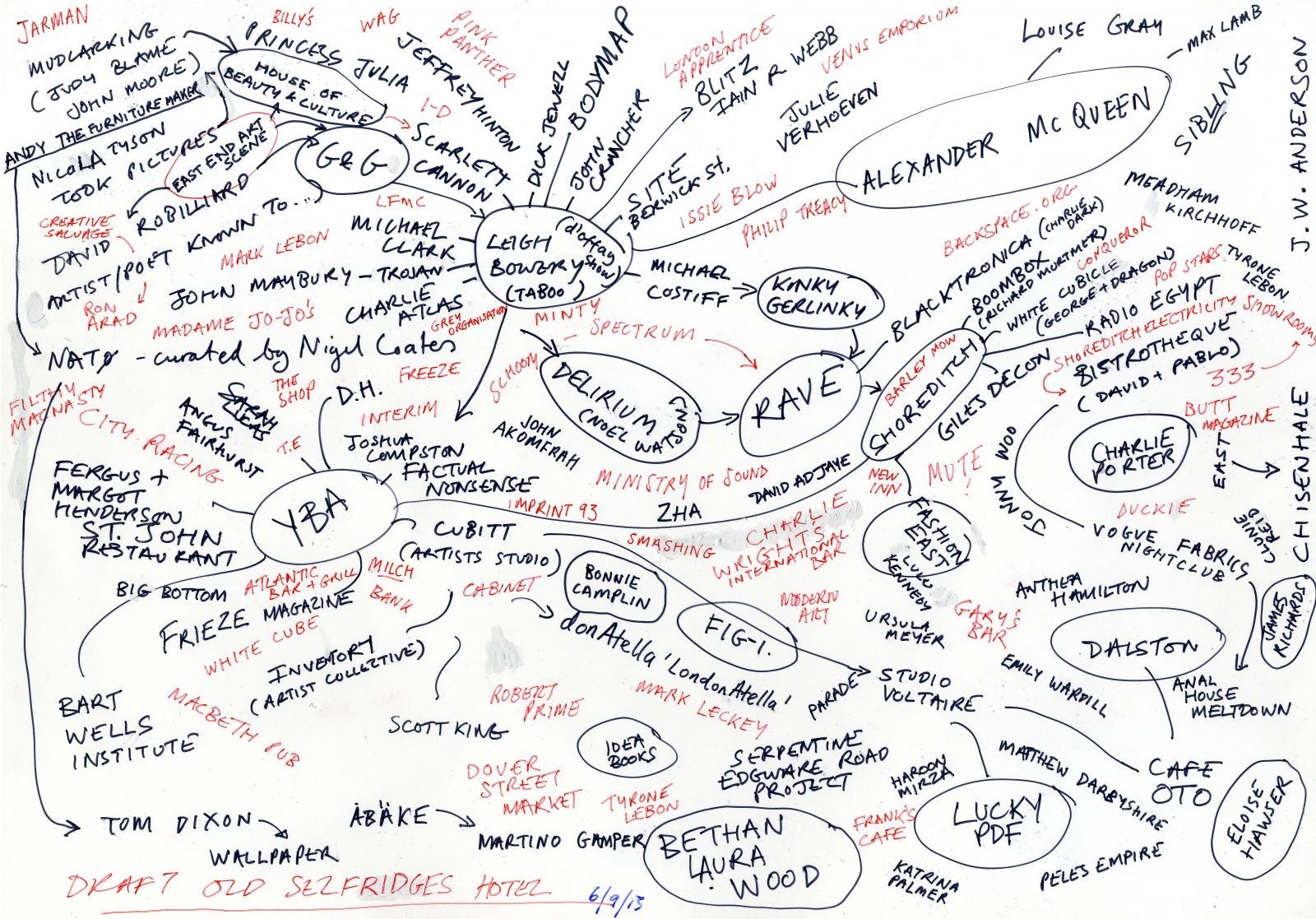 From little acorns: a flow chart of the London Underground, from Leigh Bowery to Vogue Fabrics.
Image courtesy of the ICA
Three vitrines by the collective House of Beauty and Culture are stuffed with badges, champagne corks, tribal art and bones, like something from a voodoo tomb. The sense of memorial continues in a multicoloured, star-spangled celebration of the poetry-laden paintings of David Robilliard, who died of Aids in 1988, and in the DJ Jeffrey Hinton’s wig-stuffed case, with its acetate cut-outs of clubbers both living and lost.
Videos include those of Bodymap’s catwalk shows: joyous performance pieces choreographed by Michael Clark. Another film shows a costumed Bowery pounding a piano in an East End boozer while Clark and co prance amid beer-spitting skinheads. More affecting is Paul Oremland’s Andy the Furniture Maker, following a young carpenter and rent boy who was championed by Jarman, with its images of the Earls Court gay nightlife and scavenging in London wastelands.
As shown in Muir’s YBA display, with its invitation to the epochal “Freeze” show and photos of early Chapman sculptures, the explosion of the grass-roots art scene around Hoxton Square in the early 1990s was a vital time for British art. Alexander McQueen also had his studio there. Seeing the flyer for the square’s “Fete Worse Than Death” in 1994 makes me wistful. Even White Cube has been and gone from the square since then.
But the kids have Dalston now. While the show tails off for a bit after Britart, as it goes stratospherically Saatchi, it’s clear the aftermath has left a new generation of artists and designers plenty of room for self-expression despite a relentless tide of commercialisation. Much of the later work recaptures that early irreverence, such as the alt-drag star Jonny Woo’s display for his Radio Egypt night, with its glittery butt plug and tail; or White Cubicle, the George and Dragon pub’s gallery in its ladies’ loo, which turns its vitrine here into a latrine. What this show represents for a fresh crop of creatives is a kind of wonderfully deranged Who Do You Think You Are?.