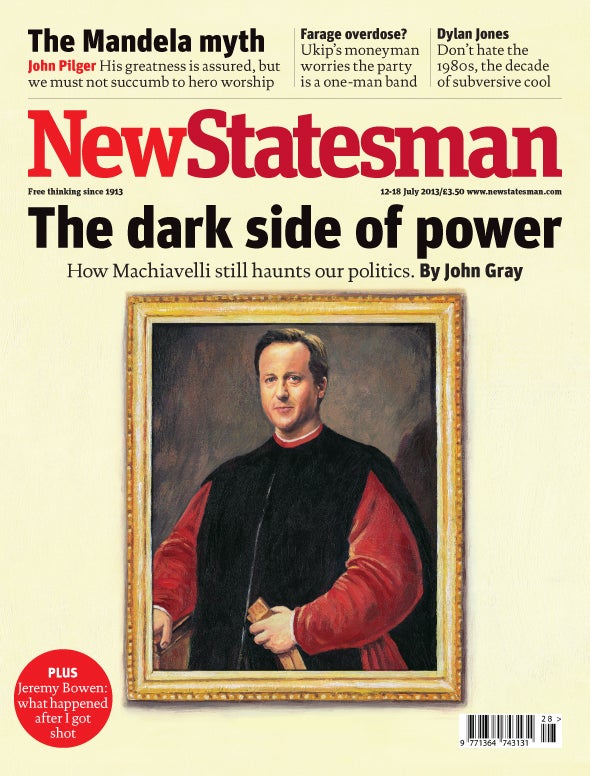 This article is from the current issue of the New Statesman, out now. To purchase the full magazine – with our signature mix of opinion, longreads and arts coverage, plus the cover story by John Gray on Machiavelli, Dylan Jones’s retrospective look at the clothes and costumes of the Eighties, a piece on what makes us human by Alain de Botton, and columns by Laurie Penny, Felix Martin, Peter Wilby, Rafael Behr, Will Self and John Pilger – please visit our subscription page.

The documentary The Act of Killing, which premiered in 2012, provides a unique and deeply disturbing insight into the ethical deadlock of global capitalism. The film – directed by Joshua Oppenheimer and shot in Medan, Indonesia – reports on a case of obscenity that reaches the extreme: Anwar Congo and his friends are now respected politicians but they used to be gangsters and death squad leaders who in 1966 played a leading role in the killing of as many as 2.5 million alleged communist sympathisers, mostly ethnic Chinese. The Act of Killing is about “killers who have won, and the sort of society they have built”. After their victory, their terrible acts were not relegated to the status of the “dirty secret”; on the contrary, Anwar and his friends boast openly about the details of their massacres (the way to strangle a victim with a wire, the way to cut a throat, how to rape a woman pleasurably . . .).

In October 2007, Indonesian state TV produced a talk show celebrating these men; in the middle of the show, after Anwar says that their killings were inspired by gangster movies, the beaming moderator turned to the cameras and said: “Amazing! Let’s give Anwar Congo a round of applause!” When she asked Anwar if he feared the revenge of the victims’ relatives, he answered: “They can’t. When they raise their heads, we wipe them out!” His henchman added: “We’ll exterminate them all!” and the audience exploded into exuberant cheers . . . one has to see this to believe it’s possible.

The film is, in a way, a documentary about the real effects of living a fiction. According to the film’s makers: “To explore the killers’ astounding boastfulness, and to test the limits of their pride, we began with documentary portraiture and simple re-enactments of the massacres. But when we realised what kind of movie Anwar and his friends really wanted to make about the genocide, the reenactments became more elaborate. And so we offered Anwar and his friends the opportunity to dramatise the killings using film genres of their choice (western, gangster, musical). That is, we gave them the chance to script, direct and star in the scenes they had in mind when they were killing people.”

Did they reach the limits of the killers’ “pride”? They barely touched it when they proposed to Anwar that he should play the victim of his tortures in a re-enactment; when a wire is placed around his neck, he interrupts the performance and says, “Forgive me for everything I’ve done.” But this does not lead to a deeper crisis of conscience – his heroic pride immediately takes over again. The protective screen that prevented a deeper moral crisis was the cinematic screen: as in their real killings and torture, the men experienced their role play as a re-enactment of cinematic models: they experienced reality itself as a fiction. During their massacres, the men, all admirers of Hollywood (they started their careers as controllers of the black market in cinema tickets), imitated Hollywood gangsters, cowboys and even a musical dancer.

However, the status of the “big other” deserves a closer analysis – let us compare The Act of Killing to an incident that drew a lot of attention in the US some decades ago: a woman was beaten and slowly killed in the courtyard of a big apartment block in Brooklyn, New York; more than 70 witnesses saw what was going on from their windows but not one called the police. Why? As the investigation established, the most prevalent excuse by far was that each witness thought someone else already had or surely would.

Does this mean that, through the gradual dissolution of our ethical substance, we are simply regressing to individualist egotism? Things are much more complex. We often hear that our ecological crisis is the result of our short-term egotism: obsessed with immediate pleasures and wealth, we forgot about the common good. However, it is here that Walter Benjamin’s notion of capitalism as religion becomes crucial: a true capitalist is not a hedonist egotist; he is, on the contrary, fanatically devoted to his task of multiplying his wealth, ready to neglect his health and happiness, not to mention the prosperity of his family and the well-being of environment, for it. There is thus no need to evoke some high-ground moralism and trash capitalist egotism. To put it in the terms of Alain Badiou: the subjectivity of capitalism is not that of the “human animal” but rather a call to subordinate egotism to the self-reproduction of the capital.

In other words, self-interested egotism is not the brutal fact of our societies but its ideology – the ideology articulated in Hegel’s The Phenomenology of Spirit under the name of “the spiritual kingdom of animals” – his phrase for the modern civil society in which human animals are caught in self-interested interaction. This principle makes possible civil society where autonomous individuals associate with each other through the institutions of free-market economy in order to satisfy their private needs. The dialectical tension emerges when we become aware that the more individuals act egotistically, the more they contribute to the common wealth. The paradox is that when individuals want to sacrifice their narrow private interests and directly work for the common good, it is the common good that suffers.

Hegel determined this “contradiction” along the lines of the tension between the “animal” and the “spiritual”: the universal spiritual substance, the “work of all and everyone”, emerges as the result of the “mechanical” interaction of individuals. What this means is that the very “animality” of the self-interested “human animal” (the individual participating in the complex network of civil society) is the result of the long historical transformation of medieval hierarchic society into modern bourgeois society. It is the very fulfilment of the principle of subjectivity – the radical opposite of animality – which brings about the reversal of subjectivity into animality.

Traces of this shift can be detected everywhere today, especially in the fast-developing Asian countries where capitalism exerts a most brutal impact. Bertolt Brecht’s play The Exception and the Rule tells the story of a rich merchant who, with his porter (“coolie”), crosses the fictional Chinese Yahi Desert to close an oil deal. When the two get lost and their water supplies are running low, the merchant mistakenly shoots the coolie, thinking he was being attacked, when the coolie was actually offering him some water. Later, in a court, the merchant is acquitted: the judge concludes that the merchant had a right to fear a potential threat from the coolie, so he was justified in killing him in self-defence. Since the two men belong to different classes, the merchant had every reason to expect hatred and aggression from the coolie – this is the rule, while the coolie’s kindness was the exception.

Is this story yet another of Brecht’s ridiculous Marxist simplifications? No, judging from the report from today’s real China:

In Nanjing, half a decade ago, an elderly woman fell while getting on a bus . . . the 65-year-old woman broke her hip. At the scene, a young man came to her aid; let us call him Peng Yu, for that is his name. Peng Yu gave the elderly woman 200RMB (at that time enough to buy 300 bus tickets) and took her to the hospital. Then, he continued to stay with her until the family arrived. The family sued the young man for 136,419 RMB. Indeed, the Nanjing Gulou District Court found the young man to be guilty and ordered him to pay 45,876 RMB. The court reasoned, ‘according to common sense’, that because Peng Yu was the first off the bus, in all probability he had knocked over the elderly woman. Further, he actually had admitted his guilt, the court reasoned, by staying with the elderly woman at the hospital. It being the case that a normal person would not be as kind as Peng Yu claimed he was.

Is this incident not exactly parallel to Brecht’s story? Peng Yu helped the old lady out of simple compassion, but it was interpreted by the court as a proof of Peng Yu’s guilt. Is this a ridiculous exception? No, according to the People’s Daily (the government newspaper) which, in an online opinion poll, asked a large sample of young people what they would do if they were to see a fallen elderly person: “87 per cent of young people would not help . . . People will only help when a camera was present.” The reluctance to help signals a change in the status of public space. Even in a public space, I am still within my private space, engaged in no interaction with other people. In order to count as public, the space has to be covered by security cameras.

It is often said that today, with our exposure to the media, culture of public confessions and instruments of digital control, private space is disappearing. One should counter this: it is the public space proper that is disappearing. The person who displays on the web his or her naked images or intimate data is not an exhibitionist: exhibitionists intrude into the public space, while those who post their naked images on the web remain in their private space and are just expanding it to include others. The same goes for Anwar and his colleagues in The Act of Killing: they are privatising the public space in a sense that is far more threatening than economic privatisation.

“The Act of Killing” is out now (certificate 15)

Slavoj Žižek is a philosopher, author, cultural theorist and intellectual. He currently holds academic positions at the University of London, New York University and University of Ljubljana. He has authored or co-authored over 50 books on subjects from politics to philosophy.