This Sunday, an “invaluable” painting by Mark Rothko was tagged in plain view by Vladimir Umanets, a manifesto-writer and co-founder of the mysterious and previously unheard of “Yellowism”. It’s an act that has hit a collective nerve. With a runaway comment thread on the Guardian website, this has got to be the most discussed new story to hit the art world since the fresco fiasco. (Though, I’ll warn you, there are those who suggest they were in it together.)

Hundreds of readers have cast in their thoughts on various news sites. “Selfish”, “shameful”, “self-important” and “dull” are just a few of the things Umanets’ act of vandalism has been called. Others have praised his audacity and the questions he raises about the ever-questionable state of contemporary art. “Let me be the first to say: Good on him,” says Rah90. “After all, what is art anyway?” chips in Glenorglenda, both from the Guardian. “Rothko is overrated don’t you think?” says WHYGODWHY on New York Magazine’s website.

In his own defence this morning, Umanets compared his act with the Dadaist absurdism of Duchamp, executed with the panache of Hirst. He told the Guardian:

I believe that if someone restores the [Rothko] piece and removes my signature the value of the piece would be lower but after a few years the value will go higher because of what I did. I was expecting that the security at Tate Modern would take me straight away, because I was there and I signed the picture in front of a lot of people. I didn’t destroy the picture. I did not steal anything. There was a lot of stuff like this before. Marcel Duchamp signed things that were not made by him, or even Damien Hirst.

An article in the Independent has him adding:

I am a Yellowist. I believe what I am doing and I want people to start talking about this. It was like a platform.  It’s good people are shocking about what happened, no-one is realising what actually happened, everyone is just posting that the piece has been damaged or destroyed or defaced. But I believe that after a few years they will start looking for it from the right angle. So that’s why I did it.

And in his cryptic manifesto (co-written with with Marcin Lodyga), he writes:

There you have the facts. For what it’s worth, I’ll throw in my two cents below. But mine is just a voice among many. What do you think? Please participate in the discussion by leaving your thoughts and responses in the comment thread below.

An open letter to Vladimir Umanets

From where I’m sitting, your act reeks of self-congratulation. Well, congratulations Vladimir, you got us talking about Yellowism. But with a website high on nudity and low on lucid, engaging information, I doubt you’ll accrue many new fans. They call yellow the colour of cowards. Sorry to say it, but your act of Yellowism doesn’t feel all that courageous.

The joy of the modern art gallery is that it’s still a reasonably democratic space, usually free from barriers, protective casings or overbearing security guards. The relaxed atmosphere that enabled your act is exactly that sort of luxury that your act will destroy. Art is a shared experience and cherishing its communal value is the reason so many fight to keep galleries accessible for all. The unfortunate legacy of your act is unlikely to be an enlightening debate on the state of art, but rather a big glass plate between us and the paint.

You forget that this painting does not belong to you; it belongs to everyone. Stop hogging it for your personal agenda. If you’ve got a message to spread, go and make some art of your own.

And shouldn’t we always be wary of things that claim to “expand” rather than evolve? Sounds a bit like the blob if you ask me. And no one thought the blob was very clever. 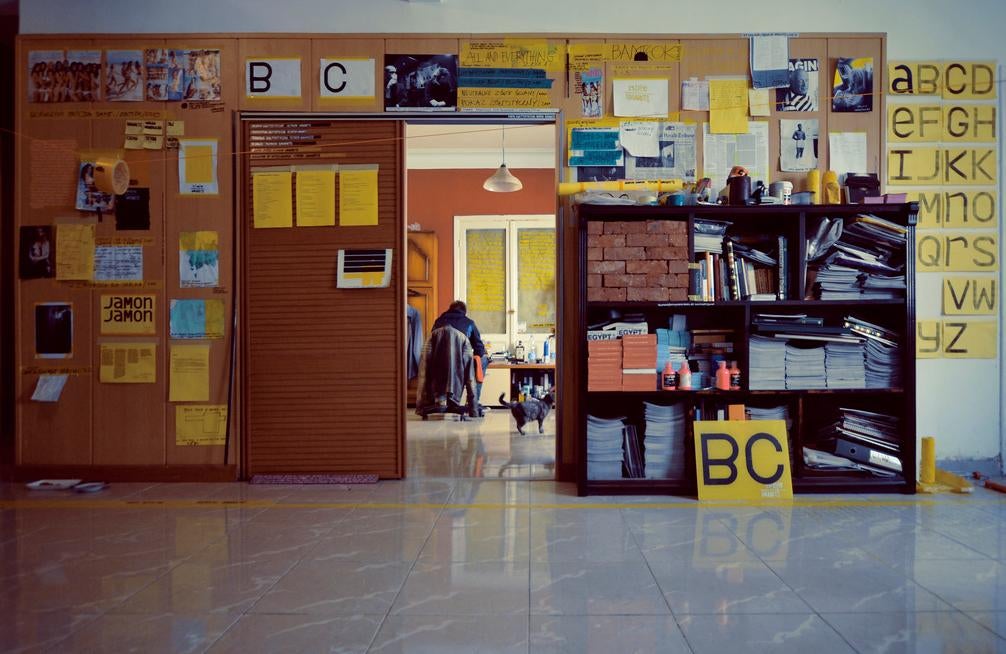 Vandals at work? It all seems so civilized… The Yellowism studio in Cairo, 2010/2011 (PHOTO: Marwan Abd El-Alim)