He needs no introduction. But he certainly deserves your attention. He’s the clothier credited with the cone bra and the man skirt, with radicalizing the looks of Madonna and Kylie Minogue, with putting street style on the catwalk, with making neoprene sexy. And from 2011 to 2013, the renowned French fashion designer has his first retrospective exhibition traveling the globe from Canada to the Netherlands. Originating at the Montreal Museum of Fine Arts, I managed to catch up with the show in San Francisco last week, where the de Young Museum plays third host to the couture circus.

The designer has been dubbed the fashion world’s “enfant terrible” since his catwalk debut in 1976, and The Fashion World of Jean Paul Gaultier: From the Sidewalk to the Catwalk is a fitting hurly burly bonanza of extraordinary garments:  140 ensembles from the past 35 years of his couture and ready-to-wear collections. It’s a well-orchestrated free-for-all of pointy breasts and sci-fi silhouettes, plus a healthy lashing of showstoppers: Madonna’s cone-bra bustier worn on her Blonde Ambition tour in 1990, a black-diamond skeleton corset worn by Dita Von Teese in 2010. 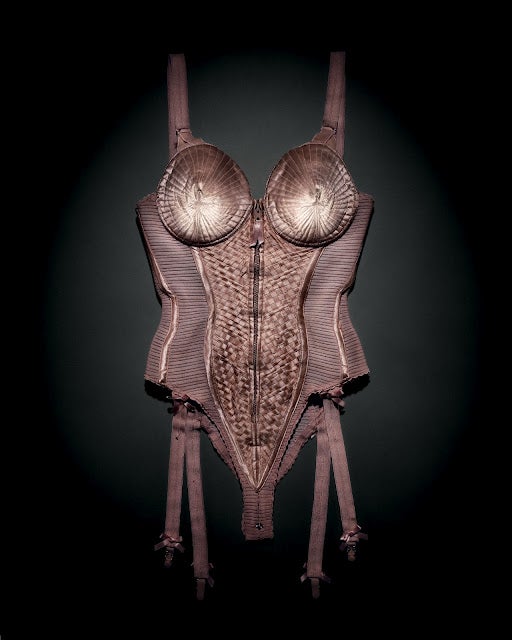 The exhibition also features state-of-the-art digital content, including “living mannequins” – 3D holographic faces projected onto dressforms, defying the inherently static quality that pervades most fashion showrooms. Mannequins directly address and even sing for the audience. It’s both amusing and unnerving – the sort of combination Gaultier adores. One gets the sense they’re a small part of a big joke.

Raucous and experimental both in form and content, I’m likely to call this the most blithely divine fashion show you’ll catch in the near future. But then I’m incredibly biased. Let me explain.

I first encountered Jean Paul on a boat ride to Dieppe when I was nine years old. It was summer, 1997, and my family had made the annual pilgrimage from our home in San Francisco to my grandparents’ in Sussex. My parents decided my sister and I had reached an age of maturity that meant we could nip across the channel to see what they called “the French way of life”. We had not reached the age of maturity that meant we could sit still for what was then a seven-hour ferry journey. My father, delegated with finding suitable distractions, announced we would be attending the vessel’s onboard cinema, little more than a few folding chairs facing a pull-down screen. Showing was a new sci-fi film with a gawp-worthy PG-13 rating. But the sweet promise of childcare relief must have usurped my father’s moral gripes, and in we went to see Luc Besson’s The Fifth Element, a film for which – I later learned – Jean Paul Gaultier had designed and produced over 900 costumes.

It would only be slight hyperbole to say my life was changed that day. After having my tender mind blown by this two hour glam-punk sexed-up space-fest (mainly involving flying car chase scenes and Gary Oldman losing his cool), I came away with a few hard facts. First, Bruce Willis will always be the baddest man in the room, even in a backless tank-top. Second, orange hair and matching jockstrap are not mutually exclusive to sexiness. Third, the right man can wear a leopard print jumpsuit and still seduce. I gave Gaultier all the credit. Outlandish, impractical, and utterly provocative, his costumes spun a visual narrative that stuck in the mind better than any action sequence or nuanced dialogue. In short he proved – more decisively than any, I argue – that it’s clothes which take a individual from memorable to legendary.

So you’ve been warned – I’m a devotee upon arrival. Walking through this show a decade and a half after my formative encounter, I find myself wondering if childhood was perhaps the best time to fall for Gaultier, seeing as it’s his playful design ethos and irreverence for sartorial authority that have made his work so appealing and enduring.

It’s this youthful spirit that Sidewalk to Catwalk grabs by the throat. Arranged chronologically, its six thematic sections are a bold, episodic recount of a mature designer who, like a perpetual teenager, has continually fought tooth and nail against the grain of normative fashion. 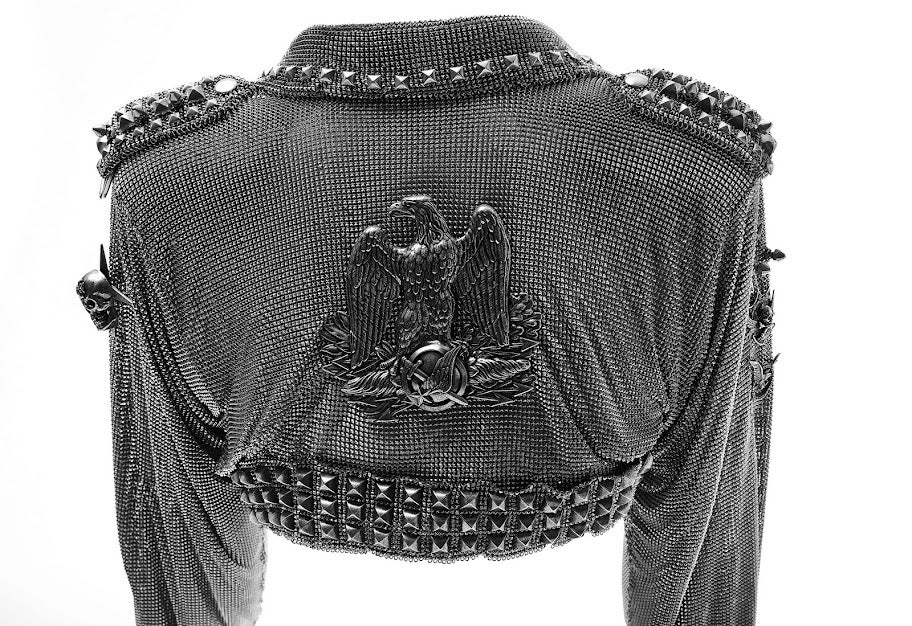 Gaultier never studied design in an academic context. Rather, after a fervent adolescent interest in fashion, he came under the tutelage of legendary avant-garde dressmaker Pierre Cardin. The exhibition’s opening room – dubbed “The Odyssey of Jean Paul Gaultier” – is an exploration of early motifs which were to become signature styles: Breton stripes, theatrical materials and kinky, androgynous cuts. His years as an assistant in the Cardin studio, famed for its quirky silhouettes and exquisite tailoring, are apparent in Gaultier’s own early attempts at subversion. Though crude (his solution for making the classic sailor sweater more “sexy” was simply to cut out the back) each piece retains the kind of singular vision that makes for sophistication.  His “Lascer” dress, a nautical columnar gown with a base of stretchy blue/white knit and elaborate feather appliqués on the skirt (it took 160 hours to hand sew), was worn by Princess Caroline of Monaco in 2000. It’s the sort of ultimate testament to his tireless gift for fusing the unconventional and the refined.

Gaultier has made a career of shaking up societal preconceptions of dress and of the fashion industry itself. He’s a man who states his personal work themes as “equality, diversity, and perversity”. His early catwalk shows earned attention for their use of nudity, cross-dressing and atypical models (he famously ran an ad in the classifieds that read: “Non-conformist designer seeks unusual models – the conventionally pretty need not apply”). His most recent collection for Paris Fashion Week, an homage to the late Amy Winehouse, was declared by some to be “in bad taste”. But Gaultier is the sort of designer who would rather take risks – and risk causing offence – than play it safe.

Sidewalk to Catwalk embraces all of this transgression. Rooms two and three – titled “The Boudoir” and “Skin Deep” – explore a fluid vision of sexuality through exquisitely constructed corsetry for both men and women. Cone bras abound, while a talking male mannequin wearing crystal-studded dress shoes and a lace jumpsuit faces a mirror, questioning his simultaneous desire/fear to dress extravagantly.

The following “Urban Jungle” is a clash of multicultural influences, highlighting thirty years of Gaultier’s collections named for the civilization that inspired it. The Hussars Collection, The Samurai Collection, The Spain Collection, The Russia Collection, The China Collection, The Africa Collection, The Chic Rabbi Collection (no joke) – each playfully engage with well known tropes of dress (Russian furs, African masks, Japanese kimono) while subverting them with inventive materials (life-like animal skin constructed from beads, raffia placemats turned into crop-tops). Once again it’s a vertiginous, extravagant aesthetic that pulses throughout. One could call it over-the-top, if it were not so skillful. Gaultier’s expertise as a couture dress maker is undeniable. Catherine Deneuve, a longtime fan, once put it well: “He can allow himself many flights of fancy because the basic structure of the garment is always impeccable. No one comes closer to the chic modernity of Chanel and St. Laurent.”

It’s a quick stop at the full-sized moving catwalk before I round the bend to the eagerly awaited “Metropolis”, the final room which explores Gaultier’s work with film directors Luc Besson and Pedro Almodovar. His costumes (and some behind-the-scenes screen tests) from The Fifth Element make their due appearance and I’m embarrassingly giddy. The child in me longs to reach out and touch. But here at the exhibition’s conclusion, amongst such a showing from such a brilliant oeuvre, the garments’ status as costume becomes more ambiguous. This amalgamation of Gaultier’s brilliance proves that all dress is a form of costume; whether for the screen, for the catwalk, for the street, for life. Sidewalk to Caltwalk declares clothing an extension of the self: our sexuality, our opinions; a means to invite power, responses, revolutions, laughter. It’s this ballsy proclamation which makes Gaultier not just memorable, but legendary. 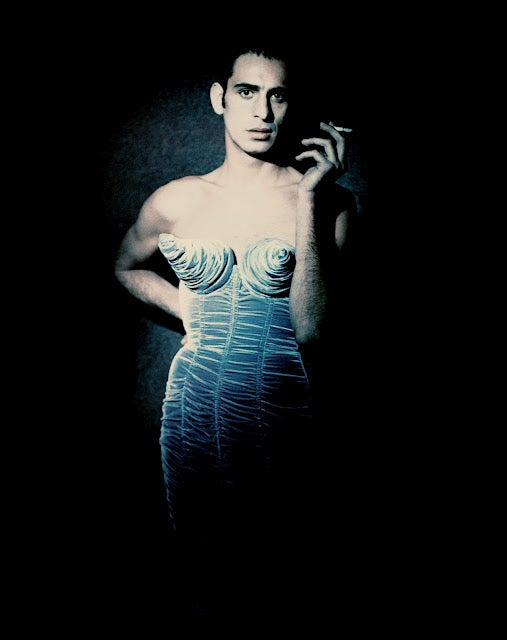