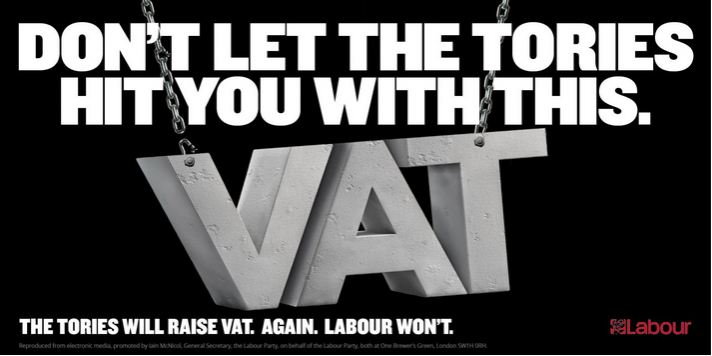 For months Labour has been warning of the danger of the Conservative raising VAT again if they win. Whenever questioned on the subject, David Cameron and George Osborne have merely stated that they have “no plans” to do so: exactly the formulation they used before increasing it to 20 per cent in their first Budget. Given the scale of cuts required to meet the Tories’ pledge of a surplus by the end of the next parliament, Labour is right to warn that they may well take the easier option of raising this revenue-rich levy.

But this attack is harder to mount if Ed Miliband and Ed Balls remain similarly ambiguous about their intentions. Mindful of this, Balls will use a speech in Birmingham tomorrow to pledge that a Labour government will not raise VAT. Here’s the key passage:

VAT is the tax that every Tory government in the last forty years has raised. But no Labour government has ever hiked up the main rate of VAT.

We will make our tax commitments in full in our manifesto. But I am clear that while millionaires have been given a huge tax cut, working people are paying more in tax after the last five years of the Tories.

So today I can announce a clear pledge to the British people. The next Labour government will not raise VAT.

We will not put up VAT. And we will not extend it to food, children’s clothes, books, newspapers and public transport fares.

And Labour can make this manifesto commitment for the next Parliament because, unlike the Tories, all of our promises are fully funded and paid for.

The announcement does not come entirely as a surprise. When I asked Miliband last year whether he could rule out increasing VAT, he told me: “We’ll set out our tax plans at the election, George. But I think I would steer you well away from any Labour government raising VAT. It hasn’t happened in the past, I don’t think it’s going to happen in the future.”

But the pledge remains significant. Before the 2010 election, Balls urged Gordon Brown to rule out raising the tax but was overruled by Alistair Darling, who wanted to retain maximum flexibility if returned to the Treasury. Following Labour’s defeat, the shadow chancellor went on to argue that this decision was partly to blame. By not repeating this mistake, Balls has given Labour another potent dividing line with the Tories. As the Conservatives seek to campaign as the party of economic security and stability, the opposition’s strategic aim is to create a sense of risk and danger around a future Cameron government (see its recent NHS poster). Balls’s declaration that the only party that raises VAT will be the Conservatives is another aid to doing so.