Ever since 2010, Labour has struggled to gain the political advantage on the economy. The legacy of the crash and the Tories’ success in winning credit for the recovery means that the party continues to lag behind its opponents. The most recent YouGov poll put the Conservative 15 points ahead on the economy and just 15 per cent of voters trust Ed Miliband and Ed Balls, compared to 37 per cent who trust David Cameron and George Osborne. It is ratings such as these that imbue the Tories with confidence that they will move ahead when the public fully engage with the election.

But a new study by NIESR supplies Labour with vital ammunition to fight back. Based on analysis of the parties’ fiscal plans, it shows that the economy would grow faster under them and the Lib Dems than under the Tories (by an additional 0.1 per cent in 2017, 0.1 per cent in 2018 and 0.2 per cent in 2019). The explanation for this is Labour’s less aggressive approach to deficit reduction. Unlike the Tories, who have pledged to achieve an absolute surplus by the end of the parliament, the party has promised only to eliminate the current deficit, while also leaving room to borrow for investment. The result is that the hit to GDP from austerity is reduced. 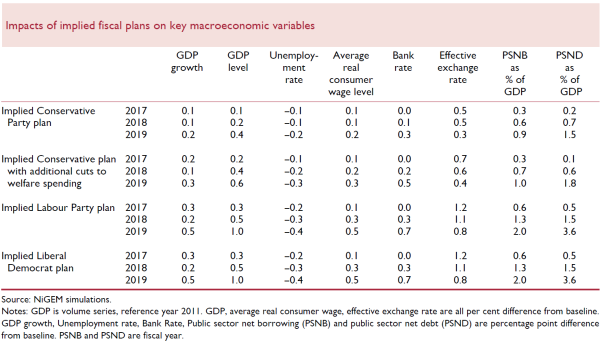 In recent months, Labour has focused on the unfairness of the Tories’ plans, which do not include further tax rises on the wealthy, and on the damage that would be done to public services as spending is reduced to its lowest level as a share of GDP since the 1930s. But it can now argue that its approach would be better for growth, too (the area on which the Tories enjoy such a large advantage), a line that it could win it a better hearing among business.

The study also notes the large overlap between Labour and the Lib Dems’ plans (the latter having pledged to eliminate the current structural deficit): “Under both the Labour and Liberal Democrat fiscal targets, public sector borrowing would be used to fund investment. The Office for Budget Responsibility (OBR) forecasts a closing of the negative output gap by 2019-20; that implies that the cyclically-adjusted current balance and the actual current balance will be the same, leaving no difference between the stated fiscal targets of the Labour and Liberal Democrat parties by the end of the next parliament.”

It is another reminder, as I wrote in my column last week, of the common ground between the two parties and of their ideological distance from the Tories.