A mesofact is a piece of knowledge which changes slowly. The term was coined by Samuel Arbesman, who describes it as lying somewhere between a fact which stays the same – like the height of Everest – and a fact which is constantly in flux – like the weather. The example Arbesman gives is of the population of the world; when I was a child, I learned it was 6 billion people. When my mother was a child, it was around half that. Yet it isn’t a fact which changes fast enough that we bother rechecking every time we state it; and so the truth runs away from us.

It’s a similar risk to the one I brought up in April, about the risks of imprecision. It may be easier to estimate things like the cost of welfare fraud to the economy as “small” or “large”; but if you present merely qualitative values, then the ability to continuously refine them if they change in small increments is lost. It’s hard enough to keep track of the fact that the world’s population increased by a billion in the last ten years; it would be that much harder to work out when it went from “large” to “very large”.

I am reminded of this by yesterday’s unemployment figures. It seems that there is a mesofact developing, which is that unemployment is falling quickly. It’s been a puzzle in British economics for a while: there is job growth, but no economic growth. Why is that?

We’ve given various suggestions here, raging from productivity collapse to underemployment; and today, the BBC’s Stephanie Flanders offers the possibility that it’s due to falling wages.

But I worry that Britain’s economic commentariat are struggling to explain a fact which just is no longer the case. Take a look at the unemployment rate since February 2008: 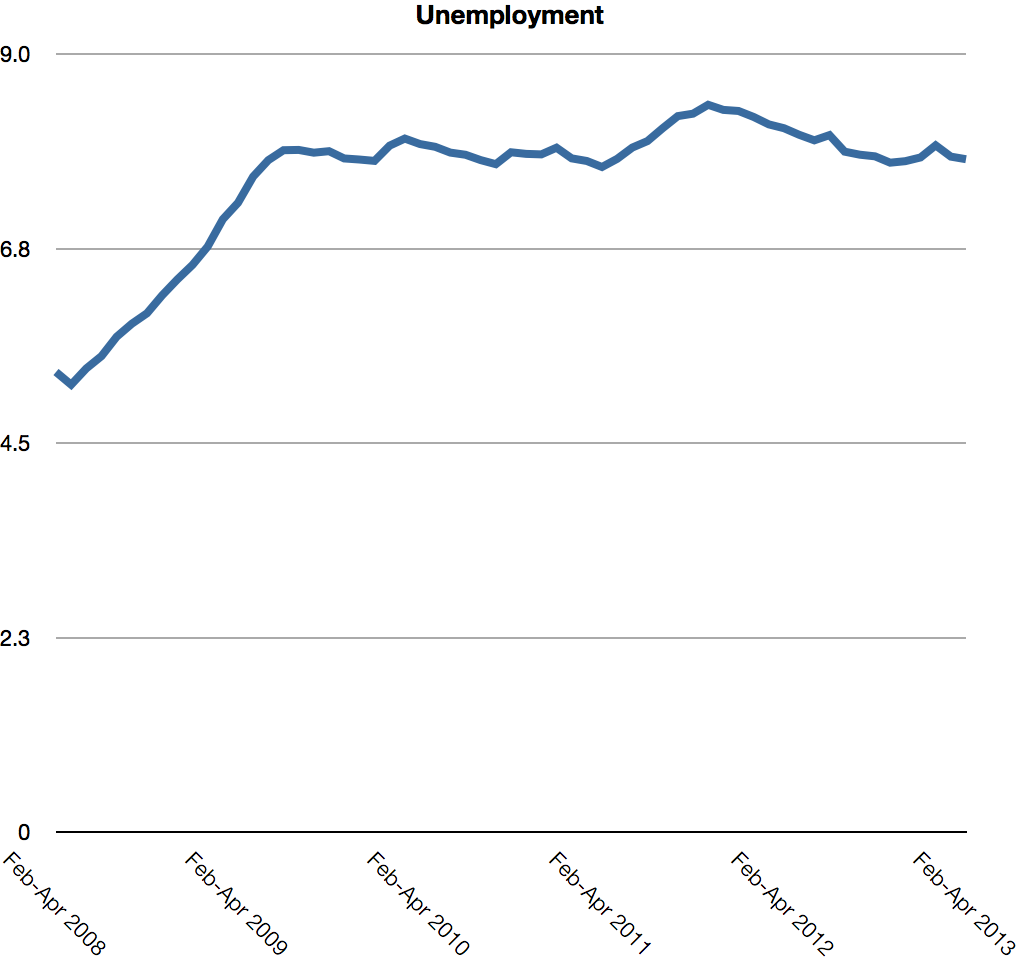 You can clearly see the steady decline which prompted the debate. Between Nov 2011 and Nov 2012, the unemployment rate fell nearly continuously, from 8.4 per cent to 7.7 per cent. Against the background of an economy which was stagnant, and sometimes actually contracting, that was a mystery.

But for the last six months, that fall has halted. Unemployment is actually sitting at 7.8 per cent in the latest release, for the three months to April, 0.1 per cent higher than its low. There is no mystery. Our economy is weak, and so is our labour market. Unemployment is stuck at over two per cent above its pre-crisis norm. That’s a disaster.

There is one important statistic where the narrative of continued, slow, improvement does shine through; that’s the vacancy rate, the number of people unemployed for every vacancy: 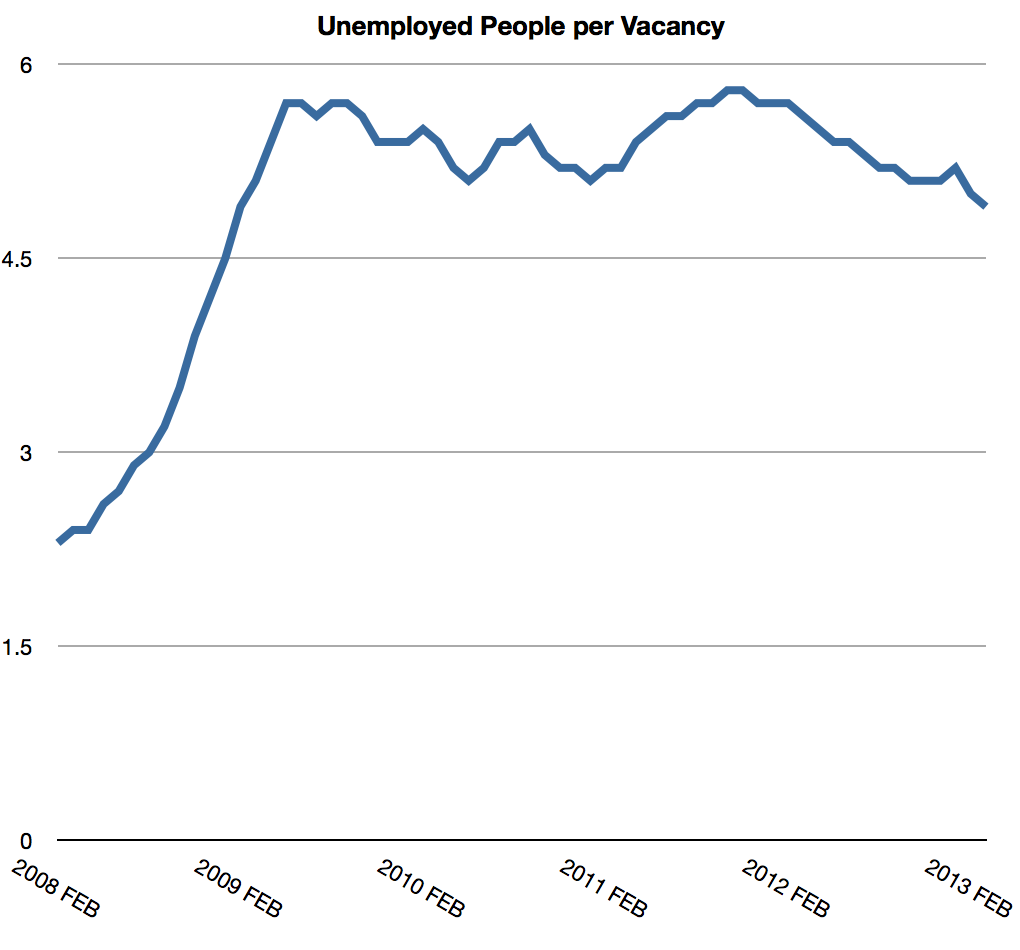 It stands at 4.9 people, the lowest since February 2009. That’s good news; but talking about the vacancy rate exposes another flaw in government thinking. Whenever the rate is substantially higher than one, discussing unemployment as a personal failing is utterly nonsensical. If every job available was filled instantly, there would still be over 2 million people unemployed.

Speaking to Work Programme providers, they highlight a different aim of the scheme. Rather than targeting unemployment in general, the point of skills-based training is to get people in long-term unemployment back into work – even if that means they take a job which would otherwise have gone to someone who has been unemployed for a shorter length of time.

But that’s where the worst news of all in yesterday’s release comes in. Because since the government began its workfare blitz, the proportion of unemployed people out of work for over a year has gone up: 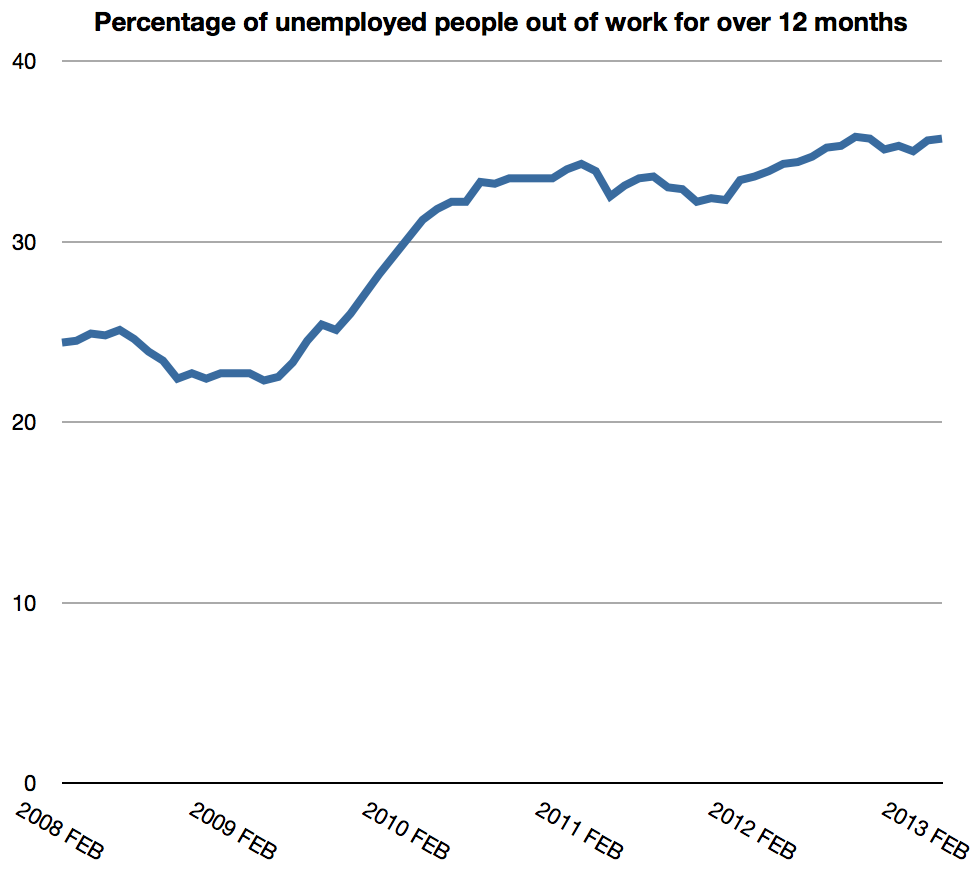 If you need a reminder of how scarring long-term unemployment is, just remember this paper from April:

The first thing employers look at is how long you’ve been out of work, and that’s the only thing they look at if it’s been six months or longer.

The labour market isn’t getting better. And on the most important measure of all, it’s getting much, much worse.