Some more good news from the labour market figures this month. Unemployment was down 0.2 per cent or 51,000 people quarter on quarter, while employment was up 0.3 per cent or 133,000. The fabled “rebalancing” appears to finally be upon us, with public sector employment shrinking by 39,000 but amply being made up for by an increase of 205,000 in the private sector.

Underemployment is still growing overall, though. Another 25,000 people are now working part-time because they can’t find full-time work. But overall, the labour figures are surprisingly positive.

I say surprisingly, because they certainly seem to conflict with the reports from the wider economy. We have had two straight quarters of negative growth, and are widely expected to be in the midst of a third (the pre-spinning began even before the quarter did, with the Jubilee Weekend being blamed). So how can we have a strong labour market?

Some commentators are using the unemployment data to cast doubt on the GDP data, but that is largely clutching at straws. It’s long been known that the two can diverge quite seriously – witness, for example, the American situtation, where the unemployment rate has fallen by almost 2 per cent since November 2009 with growth which (while good in comparison to the UK) is less than the fall would suggest – and it is not beyond the realm of possibility that we are experiencing a growthless recovery.

The simplest way for the two to head in seperate directions is a fall in labour productivity. This is the measure, basically, of how much is made in one hour of work by one person; although it does count literally how hard people work, it is affected far more by technology and workplace innovations. The last data release, for the fourth quarter of 2011, showed productivity falling by 0.7 per cent, and it would be unsurprising if we saw further falls for the first and second quarters of 2012.

The economic story for falling productivity in a recession is simple and relatively intuitive. When times are hard, employers are less likely to spend money on training, tools, repairs to machinery, and so on; all the sort of things which let an employee work harder and smarter. This is compounded by the fact that labour is relatively sticky; while a business doing well will spend on hiring and productivity improvements, a business doing badly is far less likely to fire their employees than they are to cut back on productivity-boosting spending. Simply put, recessions lead to drops in productivity (source): 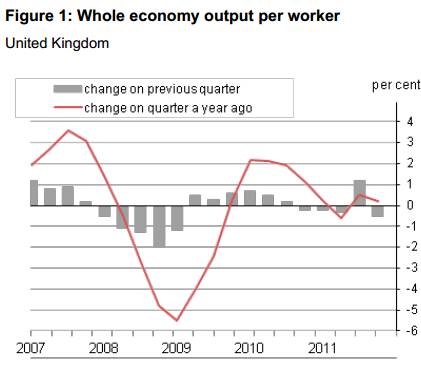 So it is absolutely possible to be in the situation we are now, with falling unemployment and a contracting economy. It’s just not entirely pleasant.