Against expectations, George Osborne announced in his Budget speech that the deficit was forecast to fall “this year and next”. He insisted that this was the case even if special factors (such as the transfer of the Royal Mail pension fund) are excluded.

But scour the small print of the Office for Budget Responsibility document and it emerges that the Chancellor misled the House. As Table 4.36 shows, “excluding Royal Mail, APF and SLS transfers” (the final column), borrowing is forecast to rise from £121bn in 2011-12 to £123.2bn in 2012-13. As in last year’s Autumn Statement, when he banked the 4G receipts early, Osborne has once again relied on smoke and mirrors to disguise his fiscal failings.

This isn’t mere pedantry; consistent deficit reduction is crucial to Osborne’s narrative that “we’re on the right track”. But as the figures below show, that is far from the case. 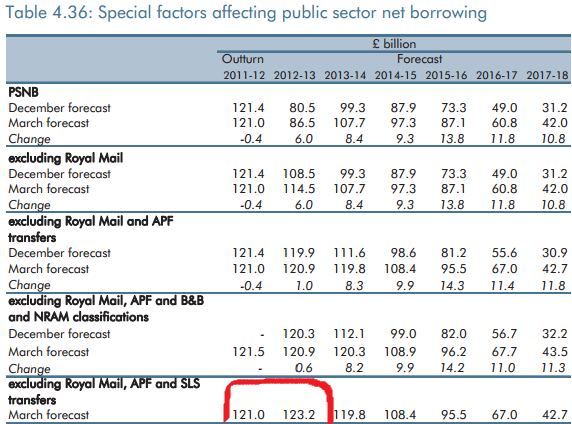