One of the biggest surprises in George Osborne’s Budget speech was his announcement that the deficit is forecast to fall this year (although excluding all “special factors” it’s actually set to rise). With borrowing so far this year £5.3bn higher than in 2012, it seemed there was no escape for the Chancellor.

For the first time since he entered the Treasury, he would be forced to announce that the deficit was expected to rise in annual terms and Ed Balls would have his revenge (Osborne memorably bamboozled the shadow chancellor in last year’s Autumn Statement by banking the 4G auction receipts early).

But yesterday, against expectations, he was able to announce that the deficit was forecast to be £120.9bn this year (2012-13), £100m less than last year (2011-12). So how did he do it? The answers are becoming clearer today. First, Osborne is forcing government departments to underspend by a remarkable £10.9bn in the final months of this financial year (including a £2.2bn NHS underspend). While some of this underspend is permanent, the rest, as the OBR document noted (see p.93) has been moved forward into future years. Public spending, it appears, has been manipulated in order to allow Osborne to boast that the deficit has fallen again.

At its traditional post-Budget briefing, the Institute for Fiscal Studies called the Chancellor out on his financial trickery. Noting that the £10.9bn was around double the average of the previous five years (see graph), IFS head Paul Johnson said:

There is every indication that the numbers have been carefully managed with a close eye on the headline borrowing figures for this year. It is unlikely that this has led either to an economically optimal allocation of spending across years or to a good use of time by officials and ministers. 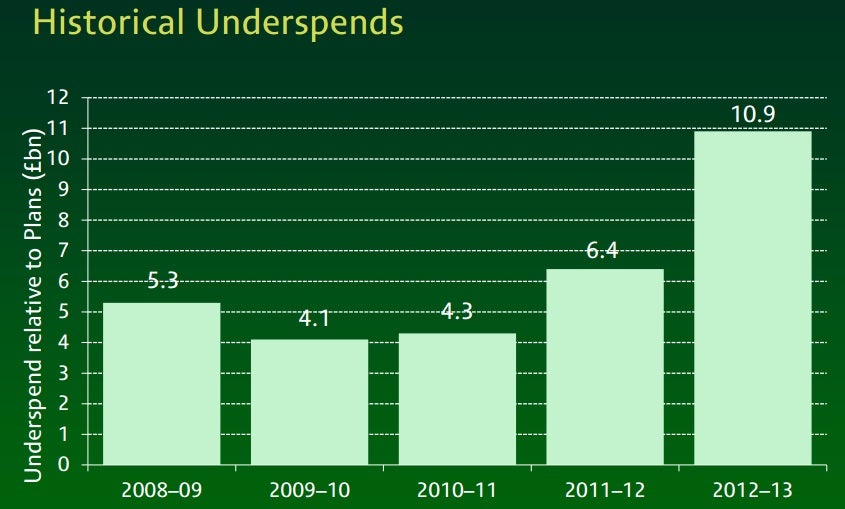 That the deficit is forecast to shrink by the minimum amount required for Osborne to claim that borrowing has fallen (£100m) is clear evidence that the underspend was motivated by political calculations, rather than economic ones.
As well as squeezing Whitehall spending, Osborne also saved money by, in the words of the OBR, delaying payments to some “international institutions” until next year. When I spoke to the Treasury press office, they cited the example of a £15m payment by the Department for International Development to Green Africa Power. The spokesman refused to confirm whether the institutions affected included the UN and the World Bank. Regardless, it is now clear that Osborne’s creative accounting puts Gordon Brown to shame.